A Visit From the Goon Squad by Jennifer Egan 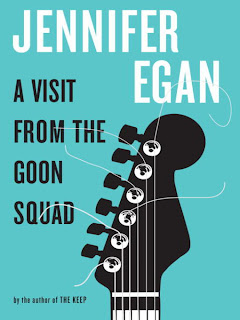 From book flap:
Jennifer Egan's spellbinding interlocking narratives circle the lives of Bennie Salazar, an aging former punk rocker and record executive, and Sasha, the passionate, troubled young woman he employs.  Although Bennie and Sasha never discover each other's pasts, the reader does, in intimate detail, along with the secret lives of a host of other characters whose paths intersect with theirs, over many years, in locales as varied as New York, San Francisco, Naples, and Africa.
We first meet Sasha in her mid-thirties, on her therapist's couch in New York City, confronting her long-standing compulsion to steal.  Later, we learn the genesis of her turmoil when we see her as the child of  a violent marriage, then as a runaway living in Naples, then as a college student trying to  avert the suicidal impulses of her best friend.  We plunge into the hidden yearnings and disappointments for her uncle, an art historian stuck in a dead marriage, who travels to Naples to extract Sasha from the city's demimonde and experiences an epiphany of his own while staring at a sculpture of Orpheus and Eurydice in the Museo Nazionale.  We meet Bennie Salazar at the melancholy nadir of his adult life - divorced, struggling to connect with his nine-year-old son, listening to a washed-up band in the basement of a suburban house - and then revisit him in 1979, at the height of his youth, shy and tender, reveling in San Francisco's punk scene as he discovers his ardor for ﻿rock and roll and his gift  for spotting talent.  We learn what became of his high school gang - who thrived and who faltered - and we encounter Lou Kline, Bennie's catastrophically careless mentor, along with the lovers and children left behind in the wake of Lou's far-flung sexual conquests and meteoric rise and fall.
My thoughts:
This book is epic!! I absolutely understand why Egan won the Pulitzer for fiction - how could she not?  The book is just that damn good.  Honestly, I don't even want to discuss the book, because I want you to read it and see for yourself just how excellent it really is. So, instead I'm just going to highlight a few bits and bobs and then let you decide if you are going to give it a read and hopefully fall in love with it like I did.
"Time's a goon, right?"
Most definitely.  Time is the biggest goon of all  (its part of the goon squad).  What's the goon squad?  Well, its basically a metaphor Egan uses to show the ways in which life's obstacles and forces can demolish or catapult a person within their lives.  And lets just say, those goons are made very apparent as we dive into this fantastic book and get immersed in the lives of its two main protagonists, Bennie and Sasha.
Spanning 50 years, this brilliantly written novel takes us on a trip through the lives of two very different people whose personal stories connect and disconnect in a variety of ways.  Egan has constructed a book that is made up of several narratives that are linked together by multiple thematic threads: time, technology, and music.  Truthfully each separate narrative could stand on its own as a short story, because they are just so engaging and you can't help but get caught up in the lives of these peripheral characters.  Not only are they tantamount in impacting both Bennie and Sasha throughout their lives, but they are also interesting, complex and relatable - you can't help but want to hear more about some of them. Egan does a terrific job of bringing all of these characters together in such a way that helps to enrich the story and elevate it to another level.

Plus, the vivid descriptions of the cities, music, clothes and atmosphere provide crystal clear images of the various time periods we visit throughout the book.  You begin to feel as if you are being transported both backward and forward in time.  Its actually quite a trip.  From jamming out to punk rock music with Bennie to finding Sasha in Italy, you definitely find yourself immersed in all sorts of situations with all kinds of people.  Egan has written such a brilliant book brimming with depth and intelligence, that you will be left thinking about it long after you've turned that last page.  This is a book that I highly recommend to everyone - it is definitely a must read!

I bought this a few weeks ago and now after your review I really can't wait to read it! I love how you didn't give anything away, but your enthusiasm came solidly through.

Oh, you have just made me so happy that I just picked this one up! My book club tries to read the Pulitzer winner every year but we've opted for a different prize winner the past couple of years due to our tastes. I think this year it's back to the Pulitzer for us!

I'm still undecided on if I will read this book myself but you do sell it quite well :) Great review.

The reviews on this book seem to be mixed, but I want to try it if for no other reason than it won the Pulitzer Prize.

Bellezza, you will love it! Or at least I hope you will. And that is what I was aiming for - to be enthusiastic without giving it all away.

Lisa, Yay! Hope you love it like I did. Can't wait to read your thoughts on it!

Amy, thanks! If you ever pick it up, I'm looking forward to finding out if you thought it was worth reading or not.

bermudaonion, that is why I tried it! Hope you like it!

I'm with Amy, still a little unsure I'll read this one. But you definitely had me reconsidering. I picked it up from the library last year but never got to it, and am only tempted now because it has so much hype around it. (And now because you loved it so much!)

Love this review! Your enthusiasm is so infectious... I haven't read this book because I am saving it. I am such a weirdo, as I often save books that I feel certain I will like. I like knowing that they are waiting for me and can be experienced when I'm in desperate need of a wonderful read. I think I will have to push this up the queue, however, since it really does sound like it's too good to keep a wallflower forever.

Wallace, I say go for it! I think you will definitely enjoy it :)

Steph, thanks! And I can't wait to read what you think about it. As far as being a weirdo about saving books, I'm the same way. Certain books I buy I tend to save for later - like I don't want to rush into them yet, because I know they are going to be so good I want to save them for last. Makes no sense, but its how I roll ;)

I have a lot of friends who've read it and said really good things about it, but your review is the first one that makes me want to actually read it.

I typically won't read a book when everyone else is though. Especially a popular book like this one. I will maybe get to it this fall.

Ti, its definitely a great read! I hope you like it. And I know what you mean about reading books that are super popular - depending on the book I may read it then and see what all the fuss is about or I'll save it for later after all the hoopla has died down.

I've been reading this book in bits and pieces and so far it's not working for me. I know I'm missing something. So I'm going to put it down for now and pick it up again this weekend. I so don't want to give up on it nor do I want to rate it bad, so I hope the break will be a great thing.

Aths, that happens to me, too! Sometimes a book just doesn't click for me right away and when I put it down and pick it up later, it just falls into place. Then again, some books just don't work. Hope you wind up liking Goon Squad after your break from it :)