Death of the Mantis: A Detective Kubu Mystery by Michael Stanley 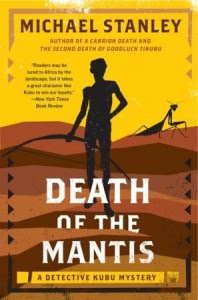 In the southern Kalahari area of Botswana - an arid landscape of legends that speak of lost cities, hidden wealth, and ancient gods - a fractious ranger named Monzo is found dying from a severe head wound in a dry ravine.  Three Bushmen surround the doomed man, but are they his killers or there to help?  Detective David "Kubu" Bengu is on the case, an investigation that his old school friend Khumanego claims is motivated by racist antagonism on the part of the local police.  But when a second bizarre murder, and then a third, seem to point also to the nomadic tribe, the intrepid Kubu must journey into the depths of the Kalahari to uncover the truth.  What he discovers there will test all his powers of detection...and his ability to remain alive.

Alright, so I'm going to be honest and admit that I signed up for this tour, because I wanted to read a book that I thought would be similar to one of my all time favorite series, The No. 1 Ladies Detective Agency by Alexander McCall Smith.  Let me just say, I didn't get what I wished for.  Instead of being carried away by the engaging voice of a lovable character like Mma. Ramotswe, I was introduced to Kubu.  He's the detective trying to solve the murder of Monzo, a ranger whose body was found surrounded by three Bushmen.  Kubu is a likable enough character, but he doesn't have the appeal to draw me in to the story.  I found myself rushing through the book to finish it - I wanted to be done.
The writing is solid, but not as captivating as I would have hoped for in a mystery.  As for the mystery itself, the big reveal was not a big surprise for me - I had already figured it out.  The characters were the most interesting part of the book, but they alone couldn't turn the book into a great read for me.  And the setting of Botswana was nice - its always been one of my favorite characters in The No. 1 Ladies Detective Agency series.  All in all, this is not a series I will be continuing with.  However, just because I didn't appreciate Death of the Mantis doesn't mean you won't.  I've read some wonderful reviews of this book and the series itself, so I'm sure many people would enjoy reading all about Kubu as he solves mysteries in beautiful Botswana.  I say check out the series if you are a fan of detective stories or books set in Botswana.
Thank you to TLC Book Tours and the publisher for providing me with a copy of the book.

I thought the cover looked like it was from The No. 1 Ladies Detective Agency. I wonder if they were trying to to make it look that way. Sorry the book didn't work for you.

I thought the same thing when I first saw it. I just thought they were trying too hard to be like the No. 1 Ladies Detective Agency, which I love to bits and well, it just didn't work out. Oh well.

I'm glad you point out that this one is different from the Ladies Detective Agency books - I think many people will expect it to be similar to that series.

I'm sorry you didn't enjoy it but I appreciate you sharing your thoughts for the tour.

heathertlc, thanks for having me. It was an okay read - I just think I had my sights set on it being like the McCall Smith ones. Oh well.