Redemption: A Story of Sisterhood, Survival, and Finding Freedom Behind Bars by Stacey Lannert and Kristen Kemp 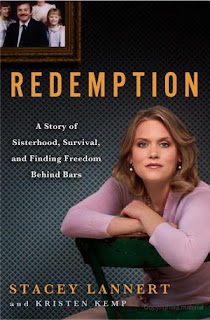 On July 4, 1990, eighteen-year-old Stacey Lannert shot and killed her father, who had been sexually abusing her since she was eight.  Missouri state law, a disbelieving prosecutor, and Stacey's own fragile psyche conspired against her:  she was found guilty of first-degree murder and sentenced to life without parole.


Redemption is Stacey's candid memoir of her harrowing childhood and the pain and protective love of her sister that led her to that horrifying night.  It is also an extraordinary portrait of what happened after she found herself in prison and how she grew determined to live positively, even triumphantly, despite her circumstances.  Ultimately, and most profoundly, she learned the healing power of forgiveness.

Simply put, this book broke my heart.  Then again, how could it not? Reading about the sexual and physical abuse that Stacey Lannert endured as a little girl just brought me to tears.  I found myself sickened as I read the details of the abuse and about this little girl who was so filled with despair that she tried to commit suicide.  Its inconceivable to me that a man who refers to himself as a "father" could do such things to his daughter.  And it is completely maddening to me that Stacey's mother who was sexually abused as a child, could be so heartless when it came to ensuring the safety of her own two daughters.  The fact that she knew Stacey was being abused and chose to ignore it, just made me want to scream.  Her only concern was herself - she was tired of being bullied by her husband and wanted her independence and so she sought refuge for herself (only herself).  And so we read about two little girls being shuttled around from one family member to the next
and how their lives became riddled with pain, loneliness and loss.

This book details Stacey's family's history and how her mother and father met and married.  We learn about her father's violent temper and his preference for Stacey (he always made it clear she was his favorite daughter).  She describes the late night tv watching and how hanging out with her father was her favorite thing to do.  She also mentions incidents where her father would have violent outbursts aimed at her mother or her sister - like the time he killed one of their pets right in front of them or the many times he would come home drunk and curse out Stacey's mom.   At times Stacey blamed her mother for her father's behavior and found herself disliking her mother as a result.  Things were up and down in the Lannert household, but that was just the way the family had always been - at least in Stacey's eyes.  However, things were about to go from unhappy to unbearable in just a matter of minutes.  Life for Stacey would never be the same the moment her father became her abuser.  Her childhood would end and her life of hell would begin.

We read about Stacey's teen-aged years and how she hated her father and somehow always wound up staying with him, while her little sister went from their aunt's to their grandparents'.  Their mom was long gone with her new husband and rarely ever seemed to check in with them.  Life was not good.  In fact, Stacey's biggest fear was that her father would harm her sister - he always threatened he would if Stacey ever left him.  And so, Stacey's main goal was to keep her little sister safe.  Of course, life can't be controlled and as Stacey's worst nightmare comes true, things go from worse to whatever is beyond worse.  One minute Stacey is staring at her sleeping father and the next minute she is pulling the trigger and shooting him dead.

Placed in a holding prison for two years, Stacey is left alone to deal with the aftermath of what she has done.  With no one to help her navigate the murky waters of the legal system, Stacey is found guilty and sentenced to life without parole.  And so we read about her time in prison and the friends she makes and how she struggles to find a way to reconcile with her mother - a woman who was never there for her when she needed her most.  We also read about how well her sister is doing and how she's had a baby.  We learn about Stacey going on Oprah and Nancy Grace to tell her story.  And we learn that after ten years of life in prison, she will finally be set free. Talk about finally experiencing redemption!  After everything that Stacey has been through, she finally finds a way to accept what she has done and move past it so that she can move forward with her life and finally start experiencing love, family and happiness.

Redemption is a book that will leave you reeling with emotions and haunt you for days, even weeks afterward.  It is a book that shares a personal story so tragic, you can't help but weep.  Its a book about a brave little girl who wound up turning into a strong and capable woman. This is a book that you must read for yourself, so that you can get the full picture of what happened to Stacey Lannert and how she was able to come to terms with the life she was dealt and how she handled it all.  Just be warned that you will cry and you will get angry, but in the end you will smile at the peace that Stacey was finally able to experience.

Thanks to Broadway Books, an imprint of Crown Publishing for providing me with a copy of this unputdownable book!
Posted by A Bookish Way of Life at 12:32 PM
Labels: Kristen Kemp, nonfiction, Redemption, Stacey Lannert

Oh my goodness... I remember her story but then lost touch with how it all played out. That poor woman. I can't even imagine what hell it was for her to live such a life.

Ti, I had never heard of her story before this book. I couldn't believe what I read - it just made my skin crawl. Poor girl. Its just unimaginable to me, too.

I almost skipped straight to the end because I just had to know if Stacey ever got out of prison. What a horrible life!

Lisa, I don't blame you, I wish I had skipped to the end. This book was definitely difficult to read at times, but really worth it.

Wow -- what an incredible and sad story. Just reading your descriptions gave me goosebumps -- how crazy.