The Expats: A Novel by Chris Pavone 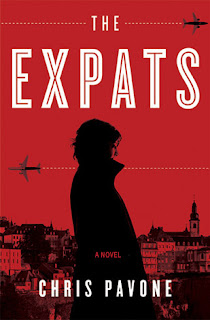 Can We Ever Escape Our Secrets?

Set against a richly atmospheric background of suspense and intrigue, THE EXPATS introduces an indelible and deeply engaging female heroine. At first glance, Kate Moore is an ordinary, American expat mom whose days are filled with coffee outings with friends and the mundane demands of child care. But Kate is also guarding a secret: until recently she’d been leading a double life as a CIA agent, traveling the globe on increasingly dangerous covert missions. After her job drives her to commit an unforgiveable act, Kate is ready for a less eventful life and her husband Dexter’s new job as a financial systems security consultant in Luxembourg provides the perfect exit strategy. But still she remains unable to bring herself to reveal her secret to him.

As Kate struggles to adapt to her new expat existence, always wondering when her past will catch up with her, her spook instincts take over and she grows suspicious of those around her. There’s an overly friendly American couple, Bill and Julia, who clearly are not who they say they are, and whom Kate suspects may be assassins; and Dexter has become withdrawn, evasive, and unhealthily absorbed in his work, which mysteriously leads him to come home with mud-stained shoes. When Kate breaks her vow to never investigate her own husband and begins to dig for the truth, her world quickly unravels as she discovers that Dexter has been harboring an explosive secret of his own—and that he may be involved in a dangerous scheme involving shell corporations, unforgiven war crimes, and the brazen theft of 50 million euros.

Transporting readers from the cobblestoned streets of Luxembourg to the snow-capped peaks of the Alps to an unforgettably climactic scene in Paris, THE EXPATS is an international thriller in the tradition of established masters such as John Le Carré, Christopher Reich, Ken Follett, and Frederick Forsyth. At the same time, it is a skillfully drawn, character-driven exploration of marital deception that breaks the bounds of the espionage genre and will appeal broadly to fans of psychological suspense.

Writing:  Spot on for a spy thriller - fun, suspenseful and well written!

I picked up The Expats  and couldn't put it down - finished it in one sitting! It was just such an enjoyable read that kept me turning page after page, that I had to find out what would happen next. You see, Kate Moore and her family have relocated to Luxembourg.  Why?  Well, Dexter, Kate's husband, has a new job working security at a bank (and when I say working security, I mean he'll be dealing with all the tech aspects of making sure no one can steal money via the net) and it will be providing them with a lifestyle that will allow Kate to quit work, and afford them weekend jaunts to Paris or Rome with their two kids.  Talk about a dream come true, right?  So, Kate quits her job at the CIA (yes, she was  spy) and packs their bags and heads off to Luxembourg to start a new life.  By the way, did I mention that Dexter has no clue that Kate was a spook for the CIA - yeah, he thought she wrote position papers about politics (little did he know).  Anyhow, life in Luxembourg is going along as smoothly as it can - the kids are in school, Dexter's working all the time, and Kate is doing laundry and making dinner - a far cry from her past career.  However, just as Kate is adjusting to her new mundane routine, she befriends a woman who may or may not be who she claims to be.  Soon enough, Kate is contacting an old CIA friend for information and breaking into her husband's work office to find out just who her husband is really working for (he's been keeping it a secret, yes, even from Kate, his wife!).  Talk about surprise after surprise - I loved it!!

Chris Pavone's debut novel is a thrilling read that will keep you on the edge of your seat with all of its slow revelations.  And believe me they are slow - it isn't until the end that you get all the information at once and that you are finally able to fully understand what has been happening in Luxembourg.  Also, Pavone employs the flash forward device to keep you further in suspense as you try to figure out how in the hell the Moore family wound up in Paris (don't worry I didn't spoil anything by mentioning Paris). As for the writing, its fun and entertaining - a perfect escape into a world filled with deception, domesticity and some pretty dubious characters.  Its a story that focuses on the concept of trust and the ways in which it can be tested in a marriage filled with too many secrets.  And believe you me, these are characters you want to trust, because they are so fascinating and multi-layered that you can't help but love getting to know them, especially Kate.  She was my favorite character.  Her sense of self is put to the test as she struggles to fit into this new role of housewife.  Folding clothes, cleaning the bathroom and going grocery shopping are not exactly thrilling tasks and soon enough Kate is wishing for more.  She misses the excitement and danger of her old job - which we can see when she throws herself into investigating her new friends and her husband.  Truthfully, I actually enjoyed getting to know Kate as a CIA agent - trained to kill and get the job done.  It was the perfect juxtaposition for this mother of two, who waits for her kids after school and takes them to the park - it showed us how complex and varied a person can be.  Plus, it provided a realistic point of view for a women who is still trying to figure out who she is and what she really wants from life.

All in all, The Expats was a fun and engaging read that I couldn't put down.  I would most definitely recommend this book to anyone interested in spy thrillers or suspense reads - you will not be disappointed!!  And, thanks to Crown Publishing, I have an extra copy to give away!  Just leave me a comment before May 1st and your name will be thrown in for the giveaway!  The winner will be announced on May 3rd! (Open to US residents only).  Good Luck!!

*Thank you to Crown Publishing for providing me with a copy of this terrific book!
Posted by A Bookish Way of Life at 9:49 AM
Labels: Chris Pavone, fiction., spy thriller, The Expats

It sounds like this book was full of tension and suspense! Thanks for the giveaway!

bermudaonion, it was! I really enjoyed it, especially since I don't really read suspense novels. I think its a genre I need to read more often :)

Ooh, this one sounds fun. I love a one-sitting spy thriller! I'm going to have to make time for this one!

nomadreader, its such a fun read! You'll definitely enjoy it :)