Equal of the Sun: A Novel by Anita Amirrezvani 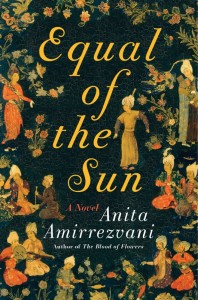 Legendary women - from Anne Boleyn to Queen Elizabeth I to Mary, Queen of Scots - changed the course of history in the royal courts of sixteenth-century England.  They are celebrated in history books and novels, but few people know of the powerful women in the Muslim world, who formed alliances, served as key advisers to rulers, lobbied for power on behalf of their sons, and ruled in their own right.  In Equal of the Sun, Anita Amirrezvani's gorgeously crafted tale of power, loyalty, and love in the royal court of Iran, she brings one such woman to life, Princess Pari Khan Khanoom Safavi.

Iran in 1576 is a place of wealth and dazzling beauty.  But when the Shah dies without having named an heir, the court is thrown into tumult.  Princess Pari, the Shah's daughter and protege, knows more about the inner workings of the state than almost anyone, but the princess's maneuvers to instill order after her father's sudden death incite resentment and dissent.  Pari and her closest adviser, Javaher, a eunuch able to navigate the harem as well as the world beyond the palace walls, are in possession of an incredible tapestry of secrets and information that reveals a power struggle of epic proportions.

Based loosely on the life of Princess Pari Khan Khanoom, Equal of the Sun is a riveting story of political intrigue and a moving portrait of the unlikely bond between a princess and a eunuch.  Anita Amirrezvani is a master storyteller, and in her lustrous prose this rich and labyrinthine world comes to vivid life with a stunning cast of characters, passionate and brave men and women who defy or embrace their destiny in a Machiavellian game played by those who lust for power and will do anything to attain it.

Equal of the Sun is a fantastic novel set in Iran during the sixteenth century.   It is filled with fascinating characters, a rich history and an inside look behind the scenes of all the politics involved in running a kingdom.  In fact, you will become fast friends with Javaher and his princess, Pari, that you won't want their story to end.  Or at least that is how I felt.  I couldn't help but fall under Javaher's spell as he told us the story of Pari and her quest to have a hand in ruling Iran, along with his own story about how he came to be a eunuch.  He tells these stories with such vivid and clear detail that not only can you easily envisage the way that women dressed and carried themselves during the sixteenth century, but you can almost hear the din of the chatter amongst the household staff as they discuss the nobles they work for.  And it is not just the details, but the tone of his emotion as he recounts these stories that leave you shedding tears for Javaher.  It is these memorable characters and their strong inclinations to do right by their country and family that really pull you deeper into the story.  Plus, Amirrezavani has a way of teaching you about a country and its people  that doesn't detract from the story.  What I mean is that she doesn't just throw in bits of history here and there for you to reference, but instead she blends the history into the story.  She weaves it in a way that makes the book engaging and informative; which I think illustrates what a terrific writer she truly is.  I absolutely enjoyed reading this book!

Okay, so what exactly is the story about? Well, its about a princess and a eunuch.  Princess Pari's father, the Shah, dies and he doesn't leave the name of the heir to his throne; which of course, throws the country into a state of unrest as it tries to figure out who should take the throne.  As her father's closest adviser, Pari is now left in a rather unsettled position - she loved helping her father run his kingdom, but now that her job is over, what will she do?  Hmmm.  If she gets her brother elected to the throne, then she can become his chief adviser and still get to do the job she loves - running the country!  However, things don't go as planned and soon Pari is at odds with her brother, the new ruler of Iran.  As for Javaher, he remains faithful to the princess.  As her confidante and spy, he has been able to procure information for her that allows her to gain a better understanding of the politics within the royal court - who is vying for power and who is feeling a bit traitorous.  All the while, Javaher has been using this role to find answers for himself.  His father, a man born into nobility was accused of treason and executed.  In order to show his loyalty to the royal court, Javaher chose to become a eunuch.  However, he has always planned on finding out about as much as he can about the man who falsely accused his father of treachery.  Both Javaher and Pari struggle to come to grips with decisions they've made and where those choices will lead them.

Equal of the Sun was fantastic!  It had drama, history, and heart.  I fell in love with the characters and thought the writing was terrific.  This is a book that I will happily recommend to anyone and everyone who loves historical fiction.  Anita Amirrezvani has created a wonderfully rich and detailed epic story that is a must read!

Thanks to TLC Book Tours and the publisher for providing me with a copy of this book!
Posted by A Bookish Way of Life at 4:29 PM
Labels: Anita Amirrezvani, Equal of the Sun, historical fiction, Literary fiction, novel, TLC Book Tours

Nice job with this one!! You made it sound really fascinating.

This one's definitely going on my TBR list! I love historical fiction, but I find that it's difficult to find stories set in countries besides Western Europe and America.

Thanks for the great review! :)

I just saw this reviewed on Sam's blog. Two good reviews this morning--to put it on my list!

Ooh, this one sounds absolutely amazing! I can't wait to read this one myself.

Thanks for being a part of the tour

Thanks, Ti! This one was just such an interesting book, it was easy to write about :)

Rayna, that's great! I think you'll enjoy it! Its just so full of wonderful details and history - I loved it!

jenclair, so glad to hear that! This one is a must read :)

Heather J., it really is an amazing read! Hope you like it as much as I did :) Thanks for having me on the tour!

I think I'm the only person on this tour that was less than thrilled with this one. I didn't dislike it but I just didn't love it. Glad you did, though!