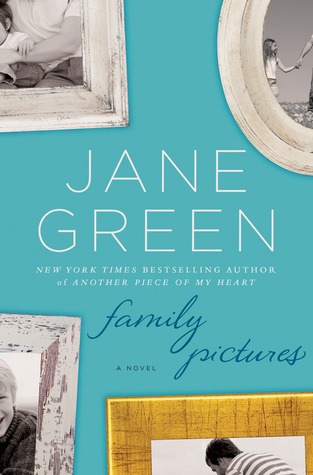 Who can you trust if not the ones you love?

Sylvie and Maggie are two women living on opposite coasts with children about to leave the nest for school.  Both are in their forties with husbands who travel more than either would like.  The looming emptiness of their respective homes has left them feeling anxious and lonely, needing their husbands to be home now more than ever.  It isn't until Eve, Sylvie's daughter, happens to befriend Maggie's daughter that the similarities between these two women become shockingly real.  A huge secret has remained well hidden for years until now, and their lives will be blown apart as dark truths from the past come to the surface.  Can these two women learn to forgive, for the sake of their children?  For themselves?

Jane Green, the beloved author of such bestsellers as Jemima J and The Beach House, has written an emotional, page-turning story about what it means to be a mother and a wife, about trust and family and the enduring strength of women when put to the test.

OMG!  I don't think I've ever read a book that read more like a Lifetime movie than Family Pictures by Jane Green.  This book had it all - family drama, anorexia, verbal abuse, empty nest syndrome, bigamy, public shame, etc. - and then some.  I swear, when it seemed like people were finally making progress a new setback would rear its ugly head and bring everything crashing down once again.  It was crazy!

Sylvie and Maggie are two women with nothing in common, except for their husband.  Yep, they share a husband.  Unbelievable, eh?  Well, both women thought so when confronted with this devastating and heartbreaking news. And, how exactly does the secret get revealed?  For Maggie, she finds out at the society luncheon she is the middle of hosting - her daughter, Grace, runs toward her screaming and crying (in front of everyone!) that dad has another family.  While Sylvie finds out by way of the men who have come to her home in order to repossess her husband's cars.  Pretty shocking, eh? Well, not really, considering that the blurb on the back of the book hints at bigamy.  Plus, we find out that Eve (Sylvie's daughter) has befriended Grace on FB and know that its only a matter of time before both girls realize they share a father.  Both girls have fathers' who forbid them from traveling to opposite coasts (Eve can't got to NYC and Grace can't got to California)...hmmm...foreshadowing of a future trip to either California or NYC?  When Eve's BFF and her mom cajole Sylvie into letting her go to NYC to check out colleges you just know that something HUGE is about to happen - and it does!!! How awful would it be to visit your friend's house for the first time and discover that her entryway contains loads of photo of your dad with her family - faint worthy awful!!  Basically, the jig is up and the next thing you know Sylvie and Maggie are trying to get a hold of their lying, cheating husband who is nowhere to be found.  Looks like life is going to get a lot more complicated and messy then either of them could have ever imagined.  And, that is all I will say.

Family Pictures was a typical women's fiction/chick lit read that was engaging, overly dramatic, and beyond predictable.  And, I loved it!  It was precisely what I was looking for in an easy, breezy read - a Lifetime movie in a book.  I would recommend this novel to fans of Green's works (who I'm sure are used to the melodramatic stories she writes).   And now, I'm off to read Carole Radziwill's The Widow's Guide to Sex & Dating - another fun, easy read (plus, I LOVE the Real Housewives of NYC and Carole happens to be one of the Housewives)!
Posted by A Bookish Way of Life at 10:57 AM
Labels: Family Pictures, Jane Green, novel, Women's Fiction

Love Jane Green - gotta get this one!!

I've never read her but lifetime movie inside a book? Sounds fun!

jmisgro, you will definitely love this one then :)

Rebecca, it was definitely fun. I got so caught up in all the drama - I loved it!