Color me nostalgic.  The other day I was on FB reading a friend's post.  She had chosen a number and then written about where she had been at that age in her life, and had included where she was at now in her life.  It was interesting to see the similarities and the vast differences.  Definitely made me even more aware of how much growing up we have done these past several years.  I made a remark and was given my own number - 19.  I didn't want a number, because I rarely ever post anything personal on FB.  So, I messaged her with my response to the number instead.  It was a quick exchange, nothing atypical about it, except for how it made me feel.   Overly nostalgic.

At nineteen, I was a sophomore in college.  I was loving my life, my friends, and my family.  Being nineteen was exciting - I felt like anything was possible.  My music obsession was R.E.M., which loudly played on repeat, much to the chagrin of my roommates.  I was living with one of my closest friends.  I had just discovered the wonderful world of Kurt Vonnegut (Cat's Cradle, anyone?).  And I was happy.  Of course, there were broken friendships, broken hearts, and stressed out nights working on term papers to contend with during that year, thereby making nineteen slightly murky at times.  But nothing prepared me for the worst day of my life.

My best friend died.  It was a car accident.  She was nineteen and her life was over.  I had seen her early that morning before she left my apartment.  We were moving in together for our junior year and I was going to store her stuff during the summer.  Classes had just ended and she was heading to NYC to visit with family.  We had been moving boxes all day, so we were finally taking a break.  It was after midnight when she left.  She decided to push through her tiredness and drive to the airport.  I told her to stay and leave in the morning, but she was stubborn and didn't want to miss her flight early the next day.  We hugged goodbye and that was it.  That was the last time I talked with her and laughed with her.

Nineteen was a tough year to get through in the end.   Looking back on it is pretty hard.  Too many feelings rise to the surface.  All those "what ifs" start to take over.  But then I think of my dear friend and smile at all of the happy memories we shared.  Her crop top obsession, love of boy bands and 80s movies, addiction to chocolate, boy-crazy addled mind, and penchant for writing sexy romance stories all come rushing back to me.  She kept her stories a secret - her parents found them in her boxes (the ones I was storing in my apartment).  I sometimes wonder about her stories and if she'd still be writing them.  I wonder if they were on par with E. L. James' writing - I just know she would have devoured the Fifty Shades of Grey series.

Thinking about my friend actually reminded about an essay I had read awhile ago (The Opposite of Loneliness).  It was written by a young woman (Marina Keegan) who had recently graduated from college.  She died in a car accident five days later.  She was a writer, too.  Her essays and pieces of fiction have been compiled into a book: The Opposite of Loneliness.  I plan on reading her book.  I'm sure I'll think of my best friend and be reminded of what could have been.  Its sad to think about these two young women and how they had their whole lives ahead of them and then in an instant they were gone.  Cripes, I'm feeling melancholy now.   Anyhow, here's a look at the cover of Keegan's book: 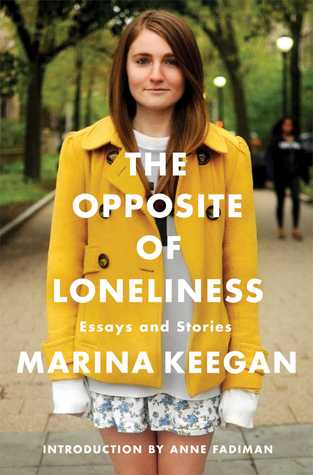 Check it out if you get the chance and read the words of a talented young woman.  I'm off to kindle a copy of the book and think back fondly on the life and times of my beloved old friend.
Posted by A Bookish Way of Life at 10:31 AM
Labels: essays, loss, Marina Keegan, past memories, The Opposite of Loneliness

I recently saw a review of this book, I plan to check it out. An absolute loss and I am sorry you lost your best friend...truly hearbreaking.

Wow, Nadia - this brought tears to my eyes. I'm sorry for the loss of your friend. She sounds like an awesome person and it's so unfortunate her life was cut so short. It's crazy how we look back and think about how much has changed and all of the things we've gone through over time.

paigereader, definitely check out that book - I hear it is amazing. And, thank you.

Brandie, so true! She was an amazing woman and I miss her loads. It is crazy how much has changed and everything we go through - its crazy when it all really seems to hit you at once. Thanks :)