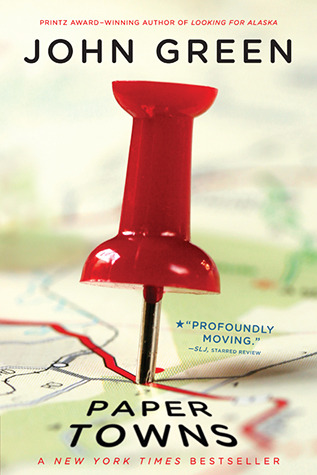 Quentin Jacobsen has spent a lifetime loving the magnificently adventurous Margo Roth Spiegelman from afar. So when she cracks open a window and climbs back into his life—dressed like a ninja and summoning him for an ingenious campaign of revenge—he follows.

After their all-nighter ends and a new day breaks, Q arrives at school to discover that Margo, always an enigma, has now become a mystery. But Q soon learns that there are clues—and they’re for him. Urged down a disconnected path, the closer he gets, the less Q sees of the girl he thought he knew.

I loved The Fault in Our Stars!  It was such a beautiful and insightful book, that I figured I should read more of John Green's works.  So, I kindled a copy of Paper Towns.  I was so excited to step back into a world created by Green, that I immediately started reading this book.  And, the more I read, well, the more disappointed I became.  Paper Towns was not the book I was expecting.  Instead of an engaging and amazing story, I got a book filled with ramblings about paper people and paper towns.  Oh, and a mystery thrown in for good measure - where in the world is Margo Roth Spiegelman?  Ack!  What a disappointment!  I was actually so unhappy with the book that I contemplated not finishing it, but I read on until the very end ( I had hoped that Green would have salvaged the story by the end - I was wrong).

Paper Towns was a book that didn't really seem to go anywhere.  It was unrealistic and filled with stereotypical characters.  I found myself bored by it.  The idea that Q was chosen to find Margo via her clues was ridiculous considering that they had barely spoken in several years (except for their one night of revenge).  I honestly could care less what happened to Margo - she was a selfish young woman who didn't really seem to care who she hurt or left behind.  And Q's obsession with finding her was overly annoying.  I would definitely not recommend Paper Towns, but I would read more Green.  I'm convinced that this book was a one-off and that the next Green book I read will be terrific.  Fingers crossed!
Posted by A Bookish Way of Life at 9:49 AM
Labels: fiction, John Green, novel, Paper Towns, YA fiction

This book came out before Fault, right? I think it is going to be hard to top Fault, period.

That's frustrating and I'm sorry you didn't enjoy it. I haven't read a book by John Green, but I have Fault on my TBR list. I will definitely not be trying this one. :)

Brandie, thanks! It was disappointing, but I'm still willing to give Green another chance :) Definitely read Fault - you will LOVE that book!!!

I have yet to read a Green book and I'm so glad I read this post! I was waffling between this one and The Fault in Our Stars, but wasn't sure which one to go with. Now I know what to buy this weekend :)

Natalie, definitely buy TFIOS! That book is beyond amazing - you will LOVE it!!!!