Maisie Dobbs is ten!  Can you believe it? Its been ten years since Jacqueline Winspear's fantastic, award winning novel, Maisie Dobbs, was published.  To celebrate, Soho Crime has released a 10th anniversary edition: 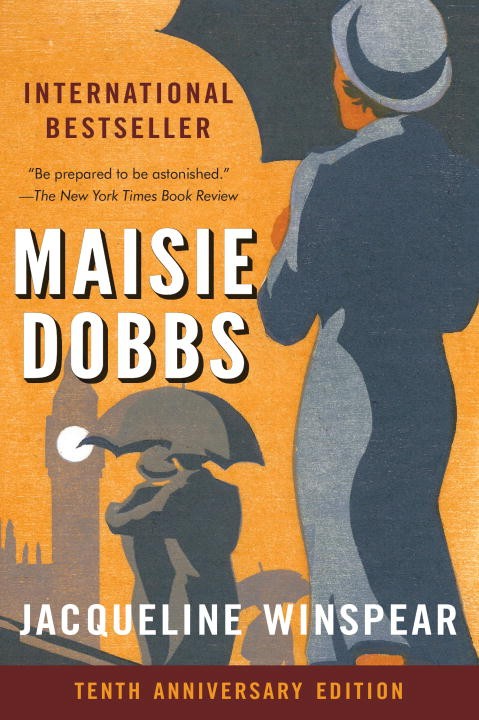 Isn't it lovely?  I know that I was excited to get my hands on a copy of this delightful book.  I absolutely love the Maisie Dobbs series - it is one of my favorites!  I gobble these books up whenever I get the chance.  They are chock full of mystery, intrigue, London, family/relationship/love drama, and Maisie Dobbs - what more could I want?  Of course if you haven't read any of Winspear's fantastic books in the series, then not only are you missing out, but you haven't a clue what I'm talking about.  You are probably wondering who is Maisie Dobbs.  Well, she's a smart and savvy woman who works as a private investigator in London during the 1930s.  How awesome does that sound?

"Maisie Dobbs got her start as a maid in an aristocratic London household when she was thirteen.  her employer, suffragette Lady Rowan Compton, soon became her patron, taking the remarkably bright youngster under her wing.  Lady Rowan's friend, Maurice Blanche, often retained as an investigator by the European elite, recognized Maisie's intuitive gifts and helped her earn admission to the prestigious Girton College in Cambridge, where Maisie planned to complete her education.

The outbreak of war changed everything.  Maisie trained as a nurse, then left for France to serve at the Front, where she found - and lost - an important part of herself.  Ten year after the Armistice, in the spring of 1929, Maisie sets out on her own as a private investigator, one who has learned that coincidences are meaningful, and truth elusive.  Her very first case involves suspected infidelity but reveals something different.

In the aftermath of the Great War, a former officer has founded a working farm known as The Retreat, that acts as a convalescent refuge for ex-soldiers too shattered to resume normal life.  When Fate brings Maisie a second case involving The Retreat, she must finally confront the ghost that has haunted her for over a decade."

After reading a summary like that, how could you not want to dive into Maisie Dobbs by Jacqueline Winspear?  I know that I will be settling into a comfy chair with a cuppa at my side and this book in  hand later on tonight - and I can't wait!  So, if you get the chance, definitely pick up a copy of Maisie Dobbs - you are going to love it!


Thank you to Soho Crime for providing me with a copy of this fantastic book!
Posted by A Bookish Way of Life at 3:25 PM
Labels: 10th anniversary edition, fiction, Jacqueline Winspear, Maisie Dobbs, novel, series, Soho Crime