Today's number was 53.  The book selected was Woman Hollering Creek: And Other Stories by Sandra Cisneros. 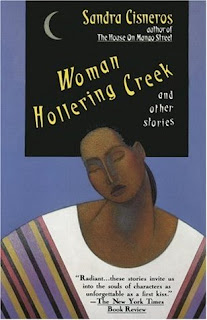 I read this book years ago when I researching texts for my MA thesis and absolutely wound up loving it. I knew I would, considering that I fell in love with Cisneros' writing after reading her debut novel, The House on Mango Street.  Cisneros' books are filled with vivid descriptions, colorful characters, and intriguing story lines.  For me, relating to the stories on a personal level was so easy, because of the fact that I'm Latina (just like Cisneros and her characters).  It felt comfortable reading her works, because what she described was so familiar to what I had experienced growing up that I finally connected with an author's work on a personal level based on my ethnicity; which was both surreal and awesome.  I had never really read any works by Chicana authors before, which was crazy to me. How could I not have read books about my own culture? Instead I just read about everyone else's.  Oh well, I had finally come home and that was just icing!  Once I read Cisneros, I moved on to Anzaldua, Moraga, Chavez, Lopez and so many others. Cisneros definitely opened the door for me to a new batch of writers and worlds that were both familiar and different.  Makes me smile just thinking about it. Also makes me realize how long its been since I've read anything by these writers lately - too long!  Hmmm. I'm going to have to rectify that.  Perhaps a re-read of something old and wonderful or the purchase of something new and exciting will do the trick.

As for this book in particular. Well, it is a wonderful group of short stories focused on the social role of women, specifically within relationships.  Cisneros utilizes the stereotypical archetypes of men and women in order to examines the ways in which these social roles affect and influence womens' issues (identity, sexuality, race, class, etc.).  Her writing is powerful and mesmerizing and takes you on a journey through these women's lives via their personal struggles to achieve their dreams of freedom and love.  The book is divided into three sections: childhood, adolescence, adulthood.  Her tone and style is poetic and easily captures the readers' attention.  She also integrates the Spanish language into her text in order to demonstrate the fluidity and combination of both cultures within each other.  All I can write is that Cisneros is an author that should be read and whose work is an important part of contemporary literature because of its ability to cross borders creatively, linguistically and intellectually.  Her feminist passions are evident throughout the book, which for me was not a problem (of course I'm a feminist who studied Chicana feminism) - I think it just demonstrates how Cisneros utilizes her writing as a way to not only describe her culture, but also as a means of presenting important women's issues to a broader audience.  All in all, a great piece of fiction.

I need to read her!

She, you definitely need to read Cisneros! Her work is just brilliant!

I absolutely love this book! I'll never forget the story with the teacher accusing the girl of owning the gnarly, raggy sweater...so unfair. So heartbreaking.

Bellezza, OMG! I know what you mean - that story just makes me tear up each time. The way Cisneros captures that experience is so clear and vivid that you feel as if you are right there with that little girl - I wanted to go up to that teacher and throw the sweater at her. Love this book!