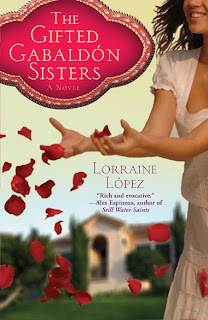 When the four young Gabaldon sisters lost their mother, it was Fermina, the old Pueblo caretaker living in their house, who held them together with her love and protection.  Upon her death, she promised the girls they would each receive a special gift, selected just for them.  And as time passed, what she bestowed - hands that can heal, a skill for spinning stories, the ability to incite laughter, and the power to curse others - emerged, bringing both blessings and tragedy.  Now, twenty years later, unsure of whether the woman who had loved them so was a fairy godmother or a witch, the sisters delve into the patched and woven history of their family.  Here shadowed secrets wait patiently to be released into the light...to show the gifted Gabaldon sisters not only who their guardian really was, but the truth about themselves.

My first read in 2011 is Lorraine Lopez', The Gifted Gabaldon Sisters, and I don't know what to write about it.  I suppose it has to do with the fact that it reminds me of my dissertation (Chicana lit was the focus).  For some reason after I completed my degree I never really picked up another Chicana lit book again.  I suppose its because for those few years I was so immersed in Chicana literature and feminist writings that I just needed to disconnect myself from them for a bit.  Well, its a new year and I figured it was time to delve back into my past and reconnect with these genres that once upon time were a huge part of my reading life.  Plus, after reading this book I realized how much fun it was to read about my own personal culture, something which always put a smile on my face.  Its nice to read a book that is sprinkled with a bit of Spanish (reminds me of my grandmother) and descriptions of the foods I grew up eating, along with the mention of the practice of curanderia, something that I still believe in.

In the book, Lopez writes about four sisters who are each struggling to come to terms with the loss of their mother and the fragmented relationships they have with each other and their remaining family.  We learn about their filthy uncle who sexually abuses them; the aunt who gives them records about the facts of life; a father who defends them; a little brother who supports them in all their craziness; and a family friend named Fermina, who passes on four special gifts (one to each girl).  Each chapter is devoted to a specific year and sister and helps to show us the ways in which each girl deals with their growing pains - first loves, school bullies, careers, babies, etc.  We also learn about Fermina, the family friend, who was much more family than friend.  Its a journey of sorts - reading about each young girl coming into her own, along with her realization of what Fermina's gift truly means.  This is a well written book that captures your attention with its vivid descriptions of the characters, the foods, the city, the experiences and everything that makes up the Gabaldon household.  Its also a book that is both delightful and at times difficult to read, because of the fact that your attachment to these four young women grows so much that you want to protect them from their twisted uncle's molestations, the unfair reality that wealth does buy freedom for the guilty, and that sometimes the sister you thought you knew turns out to be a complete stranger.  Its a book that leaves a lasting impression, because of the fact that it was able to make you feel so many things (anger, sadness, relief, happiness, etc.).  And in my opinion, a book that makes you feel, is a book worth reading.

I'm happy I decided to kick off my reading year with Lopez, because not only has her writing whet my appetite for some more Latina/o literature, its also provided me with very memorable read.

You should read The Seamstress. You might enjoy it.

Thanks, Brenda! I'll look it up.

Wow, this looks so good! I want to put it on my shelf, but am hesitating only because of the uncle stuff (sexual violence can often put me off of a book as I don't have the stomach for it)... but the rest of the story sounds so beautiful that it makes me very curious.

Wallace, it is a good book! And I totally understand your hesitation - I had no idea they would discuss that issue within the text - luckily it wasn't graphic. Its always disturbing to have to read about such experiences. And Lopez does touch on it, but her whole book is not about it - which is good. Its definitely a book worth reading. However, if you don't want to go for this one, you could always pick up her first book - its a book of short stories (actually one of those stories is in this book) called Soy La Avon Lady. It is an excellent read - much better than this one actually. She's a talented writer. Check her out.