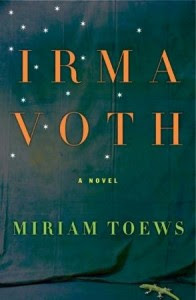 Nineteen-year-old Irma lives in a rural Mennonite community in Mexico.  She has already been cast out of her family for marrying a young Mexican ne'er-do-well she barely knows, although she remains close to her rebellious younger sister and yearns for the lost intimacy with her mother.  With a husband who proves elusive and often absent, a punishing father, and a faith in God damaged beyond repair, Irma appears trapped in an untenable and desperate situation.  When a celebrated Mexican filmmaker and his crew arrive from Mexico City to make a movie about the insular community in which she was raised, Irma is immediately drawn to the outsiders and is hired as a translator on the set.  But her father, intractable and domineering, is determined to destroy the film and get rid of the interlopers.  His action sets Irma on an irrevocable path toward something that feels like freedom.

When I first started to read this book I wasn't sure if I was going to continue with it.  I just could not get my head around Irma's narration - it was a bit off putting for me, because I didn't know what to make of her.  However, I'm truly happy I kept reading, because Irma Voth has to be one of the most odd and interesting characters I've read in quite some time.  She's nineteen, married and a Mennonite living in Mexico.  Her husband, Jorge, has left her and now she is truly alone.  She lives in the house next door to her parents' home - a house that was given to her and Jorge on the condition that they work for free for her father.  Irma's dad, Julius, is unhappy with her, because she married a Mexican.  She is no longer a part of their Mennonite community.  In fact, Irma can't speak to her mother or little brothers or even her younger sister, Aggie.  Luckily, Aggie likes to sneak away from home and visit Irma - she is always begging to come and live with Irma.

Life doesn't seem to be moving along happily for Irma, when suddenly a film crew arrives at the house next door (also owned by her father).  They are setting up shop, because they are making a film about the Mennonite community.  In need of a translator they hire Irma, who also agrees to cook and clean for them.  She needs the money and needs people to talk with. Soon enough, Irma is enmeshed in this strange world of movie-making and is dealing with depressed actors, uncooperative weather conditions and budget cuts.  She befriends Marijke the female lead and Wilson, whose confessed to her that he is dying.  Things seem to take a turn when Irma's dad shows up and demands that Aggie return home or he will shut down production on the film - Aggie has been hanging around Irma and the crew much to the dismay of her father.  However, after witnessing what happened to Aggie last time she went home, Irma decides to take things into her own hands.  Deals are made, trucks are borrowed and flights are arranged.  Irma, Aggie, and Ximena (or X as they call her) are on their way to Mexico City.  Did I mention that X is Irma and Aggie's baby sister - she was just born and their mother begged Irma to take her with them when they left.  What does that tell you about their family?

Now, I'm not going to write any more about what happens, because so much does happen in the book, before and after Mexico City.  Its a story you need to read for yourself.  Irma Voth is a character that will break your heart and make you smile at the underlying courage that glows from within her.  She may be a bit off putting at first, but soon enough you will become so enraptured with her story that you wont' be able to put the book down.  Miriam Toews has written an amazing book that is lyrical in tone and strong in plot points.  Her characters are intriguing and strange.  You will not be disappointed!

Thank you to TLC Book Tours and the publisher for providing me with a copy of the book.
Posted by Nadia at 7:55 AM
Labels: Irma Voth, Literary fiction, Miriam Toews, TLC Book Tours

What an odd little book! Sounds like an interesting character though.

The reviews thus far have left me unsure of whether or not I wanted to read this one, but I think now that I want to read this because Irma's character intrigues me.

I'm glad you stuck with it - sounds like it was a great read once you got into it!

Thanks for being a part of the tour. I'm featuring your review on TLC's Facebook page today.

Ti, it was an odd little book. I think you'd like it.

reviewsbylola, she is definitel an intriguing character. Check it out!

heathertlc,thanks! I'm glad I was on the tour for this one - I wound up loving it!

Sounds good! I've only ready A Complicated Kindness by Toews, but I really loved it so I might try this one too.

what a unique idea for a plot! I've never even heard of Mennonites in Mexico. Sounds interesting.

I'm so glad that you liked this book! You should check out more of Miriam Toews's works!

I'm so glad that this ended up picking up and working out for you. Sometimes it's good to just push through troubles at the start.

Overdue, I'll have to check that one out! Glad you read my post - hope you like Irma Voth as much as I did ;)

teri, it was an interesting plot - and I know what you mean, I hadn't heard of Mennonites in Mexico either :) Definitely a good read!

Aths, I plan on it! I really loved this one - so glad I decided to read this one for the tour :)

Pam, so true! I'm glad I didn't give up on this one, because I would have really missed out.