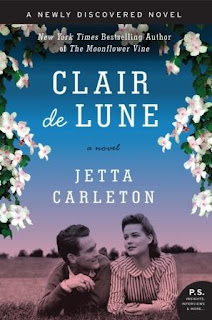 It's an old story.  You've heard it before, any number of times.  But I wanted to tell it again, as it happened in a time and a place where something existed which nowadays, it seems to me, is in short supply: innocence.  Innocence, of course, can lead to error, and error led to the expulsion from Eden.

Or so it is generally considered...

The time: 1941, at the cusp of America's entry into WWII.  The place: southwest Missouri, on the edge of the Ozark Mountains.  A young, single woman named Allen Liles has taken a teaching job at a junior college, where she strikes up an after-school friendship with two young men from her seminar: George, lanky and carefree, and Toby, a dark-haired, searching soul with a wary look in his eyes.  Together, they banter and debate over letters, ethics, and philosophy - innocently at first, but soon in a giddy flirtation, until the moment when things go too far and Allen's world is sent spinning into a state of wrenching pain and dire jeopardy.

I have literally just put down Clair de Lune and so the story is still fresh in my mind.  Truthfully, I'm not quite sure what to make of the story.  I do know that I enjoyed it quite a bit.  The story captivated me from the beginning.  I found myself identifying with Allen for a number of reasons and that is the main reason that I found myself immersed in this story until well after 1am this morning.  There was just something about her voice - young, naive, and innocent mixed with uncertainty and topped with a smidgen of idealism.

This was the story of a young woman named Allen who found herself in a rather undesirable position.  Faced with a large amount of debt and an overbearing mother, Allen takes a position teaching English at a junior college.  There she finds herself enjoying the freedom of having her own place and romanticizing her dreams of heading to New York to become a writer.  Unsure of how to fit in at first, Allen goes about her business - work, church and home.  After she settles in a bit more, she befriends the faculty members, has lunch with the ladies and debates literature with Dr. Ansel, the only faculty member with a PhD.  She even goes to the dean and asks if she can organize a seminar on literature.  Life is moving along nicely for Allen.  She enjoys her job and the friends she has made.  Her seminar is a success and she soon finds herself spending time with two of the students from the seminar: George and Toby.  The trio drink, dance and debate most nights - enjoying carefree and innocent moments with each other.  In fact, they become so familiar with one another that Allen leaves her door unlocked for them.  She sees these boys as her friends and not just as her students - until the night that Toby kisses her and she kisses him back.  Soon, Allen's life begins to change in ways that she should have seen coming, but didn't.

I won't go into detail as to what happens next, although I'm pretty sure you can guess.  Suffice it to say, Allen grows up.  She finally begins to understand that her idealistic version of the world was just that, idealized.  She also accepts the truth surrounding certain relationships and situations.  Allen faces the consequences to her actions and realizes that her options are not as limited as she believes.   In fact, Allen sees that the future may just be as bright and shiny as she had envisaged.

Clair de Lune is a book that I will not soon forget.  The writing was great and the character of Allen is one I will hold dear to my heart.  Her frustrations about her limited options for her future is something that I can relate to.  Until you realize that it is how you view your options that limits them, you will never see beyond those limits.  Definitely a good book that explores the ups and downs of becoming an adult when you already are one.  Pick up a copy and enjoy - you will not be disappointed!

Here is a link to the tour schedule page.

Thank you to TLC Book Tours and the publisher for providing me with a copy of the book.
Posted by Nadia at 7:10 AM
Labels: Clair de Lune, fiction, Jetta Carleton, TLC Book Tours

sounds wonderful. it is so going on my list.

Brenda, it was actually a really good book. I think you'll enjoy it!

This one has been making the rounds for a long time! I never really gave it much thought but what you said about the voice, makes me think that I will like it.

Ti, I think you might like it. I wasn't so sure about this one either, but after reading it I was pleasantly surprised. Definitely a good read. If you do check it out, I hope you enjoy it ;)

I can see how Allen might have slipped into this situation unintentionally - how truly sad.

Thanks for being on the tour! I'm featuring your review on TLC's Facebook page today.

Thanks, Heather! I really did love this book! I'm so glad I was on this book tour :)

Definitely seems to be the consensus that this is a book well worth reading!