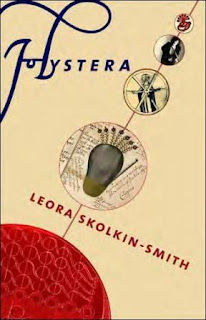 
Set in the turbulent 1970s when Patty Hearst became Tanya the Revolutionary, Hystera is a timeless story of madness, yearning, and identity.  After a fatal accident takes her father away, Lillian Weill blames herself for the family tragedy.  Tripping through failed love affairs with men and doomed friendships, all Lilly wants is to be sheltered from reality.  She retreats from the outside world into a world of delusion and the private terrors of a New York City Psychiatric Hospital.


How do we know who we really are?  How do we find our true selves under the heavy burden of family and our pasts?  In an unpredictable portrait of mental illness, Hystera penetrates to the pulsing heart of the questions.

Memories of her life overwhelm Lillian to the point that she is trapped by them and can no longer function properly on a day to day basis.  She is struggling to come to grips with the fact that she is suffering from mental issues and instead finds herself focusing on a "bulb" that has suddenly sprouted between her legs.  She tells the doctor about how much pain the "bulb" is causing, but she refuses to let anyone touch her and instead has physical outbursts when the nurses attempt to examine her. She is sad and heartbroken and unable to deal with how she is feeling, and following a failed suicide attempt, agrees to a voluntary stay at a mental hospital.

Once admitted, we learn more about Lillian's relationships.  We learn about the guilt she feels over her father's stroke - she was in the bath tub and heard a noise downstairs, but decided to ignore it.  Turns out that noise was her father collapsing in the kitchen.  Lillian is racked with guilt over the fact that she heard the 'thump', but ignored it.  Plus, it doesn't help that her mother blames Lillian for her father's fall.  Gee, what a nice mom, eh?

Speaking of Lillian's mother, Helen, well, lets just say that their relationship is complicated.  Like in the sense that Helen is always making Lillian feel guilty for anything and everything.  You see, Helen is unhappy in her life and marriage.  She had plans to leave her husband and head back to Israel, her home country.  And then David suffered a stroke, which resulted in brain damage and well, her plans to leave were put on hold.  Oh, and Lillian entering a mental hospital, well that is Lillian's fault, and how could she be so selfish as not to consider how it would make her mother feel.  Yep, they have their issues.

And we also learn about Mitchell, Lillian's ex-boyfriend.  They were seemingly a happy couple for some time, but bit by bit, Lillian began to push Mitchell away.  She no longer wanted him touching her and instead found herself feeling "emptied and used.  Mitchell touching her body only diminished Lilly, painfully."

As we learn more about Lillian and her hallucinations and dreams, we find out more and more about her issues with sexuality and intimacy.  We begin to see how much pain Lillian is dealing with and how she is slowly unraveling.  Its captivating and heartbreaking to read.  You can't help but be taken in with Lillian's story.  I don't want to reveal too much, because I do believe that this a book you must experience for yourself.  You need to read it to truly grasp the suffering that Lillian has experienced, along with the sense of normalcy she finally felt once she began to open up to the people around her.
This is a book that will leave you thinking about Lillian for days after.  You will not be disappointed!

Thank you to TLC Book Tours and the publisher for providing me with a copy of the book.
Posted by Nadia at 9:04 PM
Labels: fiction, Hystera, Leora Skolkin-Smith, TLC Book Tours

Nadia, I'm so moved by your review..what a tremendous honor to have the work so beautifully understood...
thank you,

I love books that have you thinking about them for a long time.

Leora Skolkin-Smith, thank you so much for your kind words. I really did enjoy your book immensely. It just really touched a nerve with me and I feel its a book that should definitely be read by all.

I love it when a character works his or her way into my brain and makes a home there - sounds like Lillian is just that kind of character.

Thanks for being on the tour! I'm glad you enjoyed this book. I'm featuring your review on TLC's Facebook page today.

Heather, thanks! And I agree, I love it when a character stays with you long after you've turned the last page. That definitely shows what a great book is all about.