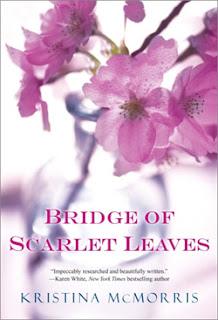 Los Angeles, 1941.  Violinist Maddie Kern's life seemed destined to unfold with the predictable elegance of a Bach concerto.  Then she fell in love with Lane Moritomo.  Her brother's best friend, Lane is the handsome, ambitious son of Japanese immigrants.  Maddie was prepared for disapproval from their families, but when Pearl Harbor is bombed the day  after she and Lane elope, the full force of their decision becomes apparent.  In the eyes of a fearful nation, Lane is no longer just an outsider, but an enemy.

When her husband is interned at a war relocation camp, Maddie follows, sacrificing her Julliard ambitions.  Behind barbed wire, tension simmers and the line between patriot and traitor blurs.  As Maddie strives for the hard-won acceptance of her new family, Lane risks everything to prove his allegiance to America, at tremendous cost.

Bridge of Scarlet Leaves is an epic story.  It is historical fiction and romance wrapped into one.  It takes place during WWII and focuses on the Japanese interment camps in the US.  We read about the experience of being forced to stay at these camps and how it affects the people that are interned, but also their loved ones on the outside. It is both riveting and heartbreaking to get through.  I must admit that prior to this novel I had no idea such camps had ever existed - talk about lack of history in history class.  Either way, I'm grateful that McMorris explored this subject and exposed us to an ugly truth in our history that I'm sure not many people are aware of (or at least that is what I hope, since I don't want to be the only ignorant one).

Vivid in detail and rich in story, this novel showcases the impeccable and thorough research that McMorris undertook when she created this book.  All of her hard work makes for an incredibly authentic read, that leaves you feeling as if you've stepped back in time and are present for the drama and struggles involved with living during WWII.  You read about the difficult decisions people make:  joining the Army to fight for their country, sacrificing your dreams to follow the man you love, and struggling to come to grips with being treated like an enemy in your own country.  You can't help but get caught up in Maddie's, TJ's, and Lane's lives as they fight for the people they love in the only ways they know how.  McMorris is able to mix history and romance so seamlessly, that you aren't even aware of the shift in story lines, because the writing is just that good.

Told from three perspectives, we get a chance to peek inside each of these character's mind's and learn about what they are going through and their version of the truth.  I actually like it when authors' use this tactic to tell a story - I feel it provides us with more insight and offers a much more layered feel to the story.  And believe me, these are three characters that you want to know.  They are complex, emotional and relatable - which makes them feel like people you might just know.  Their internal and external struggles will tug at your heart strings and leave you an emotional mess.  You want them to get what they want and you won't forget them anytime soon.

McMorris has done an excellent job with this novel.  From the characters, setting, and exploration of themes, such as love, patriotism, and family loyalty, you can't help but be impressed by her talent. I would most definitely recommend Bridge of Scarlet Leaves to anyone and everyone looking for their next great read - check it out! You will not be disappointed!!

Thank you to Rare Bird Lit and the publisher for providing me with a copy of this book!

I'm glad to know this is so well written. It sounds fabulous!

This sounds like an interesting read. I've read so little about the internment camps, so I think you are right that we are all more ignorant of the truth than we might wish.

bermudaonion, it was and is!

Amy, it was an interesting read and at least now having read this I don't feel as uninformed.