And When She Was Good: A Novel by Laura Lippman 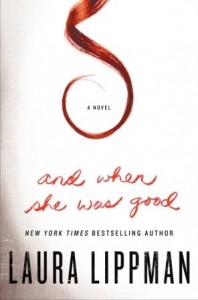 She knows she is the first person he will come looking for.

Heloise believed she was safe.  Once the star employee of a low-level pimp, she put him in prison and then created a new life for herself in an insular community where her neighbors, though friendly, keep to themselves and don't ask too many questions.  But the security she's worked so hard to establish is now under siege on multiple fronts.

Her once oblivious accountant is asking loaded questions.  Her longtime protector is retiring from the police department.  Her employees can't be trusted.  And not even the best escort services are immune to the effects of the lingering recession.

Everything tells her that it's time to get out.  But the one man who knows almost all of her secrets says she has to stay in.  And given that another suburban madam has turned up dead in a nearby town, it's all too possible that Heloise's former pimp is just as lethal behind bars as he was on the outside.

A patient, determined killer.  A desperate yet resourceful woman.  An innocent child.  How far will Heloise go to protect her son and the life she's built for him?

DNF.  That is what I have to declare with regards to this book.  I Did Not Finish it.  I just couldn't.  The book was just not my cup of tea.  I agreed to review it for TLC's Book Tour of And When She Was Good, because I had not read any Lippman before and figured this would be the perfect opportunity to give her work a go.  I like crime thriller/suspense types of books and having heard that Lippman is one of the best-selling crime thriller authors of our time I assumed I was in for quite a treat.  Well, you know what they say about people who assume things...anyhow, I didn't get the good read I had expected.

From the above summary, the book does sound rather interesting doesn't it?  Well, its not.  Or at least it wasn't for me.  I honestly didn't give a fig about Heloise and her son; or the fact that she was hiding out from her ex-pimp.  There was just something unlikeable about Heloise that made me not want to read any more about her.  I just couldn't stand her voice.  And reading about her past and learning how she came to be a madam didn't make me feel sad for her in the least.  There was just something lacking in Heloise and her story.  I had expected to be captivated from the start and find myself immersed in an unputdownable novel; instead I was disappointed and left with an unfinished book.  Based on this book alone, I would not read any of Lippman's other novels.  I just don't think her writing (which I found to be rather lackluster) and characters (which I felt were all devoid of emotion) are exactly what I want to be reading.

Of course, I am in the minority, because the majority of the other hosts on this TLC Book Tour are raving about, And When She Was Good.  So, who knows - maybe you will love this story as much as these reviewers have: TLC Book Tour site.

Thanks to TLC Book Tours and the publisher for providing me with a copy of this book!
Posted by A Bookish Way of Life at 3:04 PM

Darn, sorry that your first experience with Lippman didn't turn out to be a good fit. Thanks for being on the tour.

I attempted her Girl in the Green Raincoat, or something similar, but didn't finish because the writing was just terrible. I felt like I was reading something for a child learning to read. Idk. I've heard that some of her novels are really good, so I haven't given up just yet.
If you don't connect with a story it's generally not worth the time.

Heather, thanks for having me on the tour.

Beth, I'm glad I'm not the only one who found her writing to be subpar. And I know what you mean - I haven't given up either, just because you never know - one of her other novels may turn out to be a worthwhile read. Who knows? But, yeah, if I'm not jiving with the story then I'm not gonna spend anymore time with it - its just not worth it.

I've read two of her novels and didn't really care for either. The premise of this oneintriguesme, but if it doesn't work, then I'm considering Lippman a lost cause for me.

nomadreader, that's disappointing to hear. Hmmm. I'm guessing she just isn't for everyone then - and that includes me. Oh well.