The Twelve: A Novel by Justin Cronin 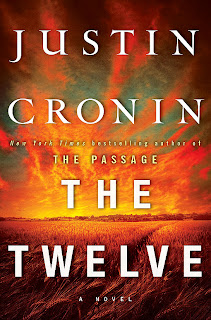 What the frack did I just read?  Because it certainly could not have been Cronin's follow up to The Passage.  My real copy of The Twelve must have gotten lost in the mail and somehow I got stuck with what I can only describe as an "overwhelmingly, overworked story riddled with too many characters that commit some atrocious acts that I believe were just thrown in for shock value - basically, a must NOT read."  Seriously, what happened to The Twelve?

I'm not even going to write a full post on this book, because I'm just too disappointed with it.  I think I'm going to just share what my cons were with The Twelve.  Here goes:

Writing:  Where did all the good writing go?  Did Cronin put too much pressure on himself to produce another bestseller, that he forgot how to simply tell a good tale?  He must have, because the book I just finished reading lacked a feeling of cohesion to his previous novel; it lacked depth and complexity; it was overly written and filled with horrible characters and shock-value story lines; it made me wish I hadn't been so excited for its release, because then I wouldn't have been so disappointed.  The writing was just not good.  I felt it lacked the suspense and anticipatory sense that something exciting/dangerous was about to happen, that the first novel displayed perfectly throughout.  This story felt rather thrown together - like, Cronin had so many ideas that he just wanted to smash them all together, regardless of how well they went together.  The way one story line would begin and then the next moment another one would begin, made for rather disruptive reading.  I found the whole book to feel rather chaotic, and truthfully, I felt rather lost at times when I was reading it.

Characters:  I have to admit that one of the reasons I loved The Passage, was due to the fact that I loved the characters.  They were memorable and very relatable. They were characters you rooted for.  I was eager to find out what had happened to Sarah, Peter, Amy and Alicia; and even though I did find out what had happened to them, I found out that I really didn't care (that's how bad the writing was).  As for the new characters - ugh! They were just awful.  There were ones you were supposed to care about, but they died too quickly or their stories ended too abruptly; and then the ones that you were supposed to hate, well, you disliked them so much that you didn't want to read about them at all.  They were just too despicable and I felt that that Cronin went a bit over the top with them.  I realize every book needs its villain, but isn't that why we had the remaining eleven of the twelve for?

Story:  Where was the story?  What happened to the fascinating, adventure story Cronin created in The Passage?  Why didn't he bring that feeling of suspense/thriller back?  What was he thinking about when he came up with some of these story lines?  Did there have to be sanctioned rape?  Did April and Bernard have to share that night together (that scene skeeved me out - isn't she really only 17? )  Why did it seem like is was mainly the female characters who had to endure the short end of the stick all the time?  What about the male characters? And, seriously, what was up with all the melodrama and predictability?  Tifty was Nina's dad - really?  Lila's daughter was really Sarah's?  And, Peter and Amy are supposed to be together - what about Lish?  I don't know, it all seemed a bit convoluted at times to me.  Not sure, that Cronin realized how scatterbrained the story lines were once they were all put together.  I actually found myself skipping ahead at times, just so I could get to the end already.

Overall, The Twelve was not what I had hoped it would be - another great read like, The Passage.  I was left disappointed and wishing I had just watched Downton Abbey or Homeland instead. Ugh! What a bummer! Oh well, the only positive is that I can now cross off one more book off my list for RIP VII - which means, I am done! Hurrah! 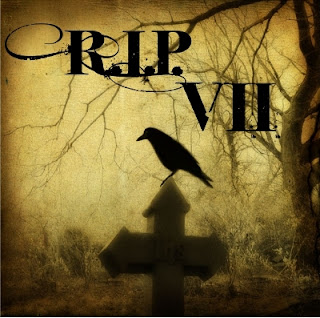 Oh no! I am not very far into it but this can't be good.

This is one of the reasons I don't even start series - if I love the first one, I stand such a good chance of being disappointed.

Ti, it could just be me. Hopefully you will enjoy it. I just thought it would be as good as The Passage and I didn't think it was.

Natalie, if you are enjoying it, then maybe you will wind up liking it. I just didn't think it was as good as it could have been. Don't get me wrong, there were some good parts, but too few to make the book good.

Lisa, I can understand that.

You aren't the first person to be disappointed in this. I haven't read it but I've seen a few dismal reviews. Boo :(

Jennifer, thanks for that. I was starting to wonder if maybe I missed something. Definitely, Boo ;(

Bummer! Hopefully, this is just a sophomore slump and maybe the next book will be better. I still need to read the first one so it's disappointing that the second book doesn't live up.

Aths, definite bummer! Oh well, maybe the third book will be an improvement.

I like this review but I'm glad I'm not the writer.

It often happens though, doesn't it? Great experience with the first and then disappointment with the second.

I was going to ask you review my new novel but er... maybe not. :D

Oh no. I skipped the entire post but for the first and last paragraph (since I'm anxiously awaiting for the library to pick my number), but you've got me somewhat worried now. I quite enjoyed the first book, so here's to hoping.

jdhugheswriter, what can I say, I call them like I see them. I think I just expected too much - oh well.

It's a shame when you read through a whole book and the experience has not been what you expect. You feel like you've wasted so much time!

Yep. I stand corrected. I ended up wanting this book to just be over. After the first couple hundred pages (which I was interested in the immediate aftermath and those characters - although Bernard and April, wha?), I was trying to give it more of the benefit of the doubt, and then...nope. I also tried to rush through the end. Very disappointed.

Natalie, I felt the same way. I rushed through it to, hoping it would get better and then just to get to the end. So disappointing. Like you, I was interested to find out what happened to the gang from the first novel, but I just felt like Cronin didn't know how to deal with them anymore since he wanted to introduce new characters (which I didn't even care about). And yes, what was that with Bernard and April - crazy! Not sure how the third book is going to be - hopefully it will be much better than this second one.

I did finish The Twelve, and I actually liked it slightly more than The Passage. The time jump actually filled in parts that I missed from The Passage.

They do go after The Twelve, but not until quite late in the book, and there is some more information on the science, and the virus itself.

Having said all of that, these books are all huge time investments, but The Twelve is some 200-ish pages shorter than The Passage which made it a much faster read for me.

Cronin gives us a wide view of this diseased riddled world with brave survivors fighting an immortal force hell bent on eradicating humanity. I love it!

Thoroughly enjoyable. I love the way he brings back characters over and over and breathes new and additional life into them. Hard to compare to The Passage but a heck of a good ride. Cronin is smart as well as wise and he provides a lot of wonderful dialogue reflecting this wisdom.