Nutcracker by E.T.A. Hoffmann, Illustrated by Maurice Sendak, and Translated by Ralph Manheim 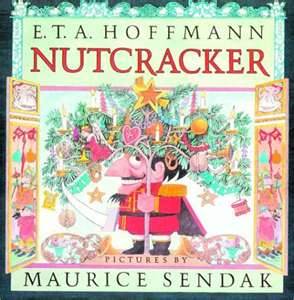 The tale of Nutcracker, written by E.T.A. Hoffmann in 1816, has fascinated and inspired artists, composers, and audiences for almost two hundred years.  It has retained its freshness because it appeals to the sense of the wonder we all share.

Maurice Sendak designed brilliant sets and costumes for the Pacific Northwest Ballet's Christmas production of Nutcracker and has created even more magnificent pictures especially for this book.  He has joined with the eminent translator Ralph Manheim to produce this illustrated edition of Hoffmann's wonderful tale, destined to become a classic for all ages.

The world of Nutcracker is a world of pleasures.  Maurice Sendak's art illuminates the delights of Hoffmann's story in this rich and tantalizing treasure.

Okay, so I'm going to admit to never having read Nutcracker before, or even seeing the ballet version of it either.  I know, its crazy, considering that every year around Christmas time there is mention of Nutcracker on the telly, but I just never got round to picking it up or even wanting to watch it.  And, I always thought it was called The Nutcracker, not just Nutcracker.  Just goes to show how out of the loop I was.  Anyhow, I was expecting to read about a lot of dancing and mice and sugarplums, but that wasn't the case.  Whilst I did read about mice and there was some dancing and plenty of candy at one point, the story was definitely not what I expected - it was even better!

Basically, the story is about a little girl named Marie who finds herself in love with a Nutcracker toy she receives as a gift.  The toy comes to life and is soon battling the Mouse King, who is terrifying Marie - what with his requests for all of her candy, dolls, dresses, etc.  After defeating the Mouse King once and for all, Nutcracker gives Marie all seven crowns that the Mouse King had worn in order to show her he was victorious in battle.  And then he asks Marie to join him in a magical kingdom, where she will be his queen and enjoy a life filled with toys, candies, and anything she desires.  Marie accepts and takes off with Nutcracker.   The end.

How crazy is that?  A Mouse King bullying a little girl?  A Nutcracker battling a Mouse King? What the what? Seriously though, I really enjoyed reading this story.  It was a bit odd at times, but I think that has to do with the fact that its an older story (think 1816) and it's been translated - so, there were times when I had to re-read a passage or three.  However, the formal language didn't detract from the engaging and entertaining aspects of the story at all.  The characters were fantastic:  I loved Marie as this precocious little girl who finds herself involved in this battle between Nutcracker and the Mouse King;and her Godfather Drosselmeier is this eccentric old man who is beyond talented at toy making, and also a rather gifted storyteller.  Oh, and Nutcracker was as loyal and brave as any true soldier would be, whilst his foe, The Mouse King, was as wicked and evil as could be.  These characters are what made the story such fun to read.  The story itself is a story within a story - you see, Marie's godfather Drosselmeier makes the toys that Marie and her siblings have fallen in love with, but he is also the one who shares the story of how Nutcracker came to be.  He shares how Nutcracker was once human, but found himself turned to wood after an awful curse by the Mouse Queen.  In order for Nutcracker to be turned human, he needs to find someone who will love him just as he is. Pretty interesting, eh?  I thought it was.  I found myself caught up in this tale of revenge, loyalty, and love.

Nutcracker is a book I would definitely recommend - its a great book for kids and their parents, or for fans of children's literature.  Check it out! You will not be disappointed!  Plus, you will also enjoy all of the amazing illustrations by Maurice Sendak - they are excellent!

Thank you to Crown Publishing for providing me with a copy of this book!
Posted by Nadia at 7:46 PM
Labels: children's book, E.T.A. Hoffman, fiction, illustrated, Maurice Sendak, Nutcracker, Ralph Manheim., story, translated

I love the Nutcracker. I just wish I loved Maurice Sendak!

Holly, I know what you mean :)

Anonymous, thanks for stopping by ;)