Cascade: A Novel by Maryanne O'Hara 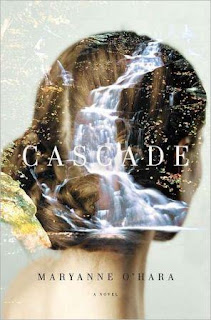 Cascade, Massachusetts, 1935.  Desdemona Hart Spaulding, a talented young artist who studied in Paris, has sacrificed her dreams of working in New York City to put a roof over her newly bankrupt and ailing father's head.  Two months later he has died and Dez is bound by the promises she has made to her father, her husband, and her town.  Dez is stifled by her marriage to kind but conservative Asa, who is impatient to start a family, and her ambitions are fading.  She also stands to lose her father's legacy, the Cascade Shakespeare Theatre, as Massachusetts decides whether to flood Cascade to create a new reservoir for Boston.

Amid this turmoil arrives Jacob Solomon, a fellow artist and kindred spirit for whom Dez feels an immediate and strong attraction.  As their relationship reaches a pivotal moment, a man is found dead and the town points its collective finger at Jacob, a Jewish outsider.  When an unexpected acclaim and a chance to recapture her lost dreams of life in New York City arise, Dez must make an impossible choice.

As the threads of this enthralling novel intertwine, they weave a portrait of an unforgettable young woman who finds herself caught in the age-old struggle between duty and desire.

Alright, this review is going to be short and to the point - mainly, because I didn't finish the book. Ugh! My first DNF of 2013!  Not a good way to start the new year, but what do you do?  And just so you know, it wasn't the writing that turned me off of the book, it was the protagonist, Dez.  I just did not like Dez and therefore I couldn't really enjoy the book.  I know its crazy to let a character stop me from reading, but sometimes it happens and this is one of those times.  Here goes:
Now, since I didn't finish the book, I feel that I should provide you all with a link to the TLC Book Tour schedule for this novel - that way you can get some other opinions on this book.  And just so you know, I've read some of the other reviews and they are all raving about what an amazing read  Cascade is.  Here's the link: Cascade tour schedule. Check it out!!  And here are links to O'Hara's website and blog.

Thanks to TLC Book Tours and the publisher for providing me with a copy of this book!
Posted by Nadia at 8:00 AM
Labels: Cascade, fiction, Maryanne O'Hara, TLC Book Tours

Oh wow! A DNF so early! Too bad it didn't work for you but if the protagonist is a twit then I can certainly see why.

Ti, I know! Not a good way to start the new year. Luckily, I read some YA books after CASCADE and now my reading mojo is back. Plus, there were no twits in the books ;)

Darn, I'm sorry this one didn't work for you but thanks for sharing your honest opinion for the tour.

Oh, no! A DNF so early in the year! However, it is possible to like the writing while disliking a character. I get that.

I'm reading this book right now, about halfway through, and I agree with just about everything you say. The writing style is gorgeous, as you say, and that's probably the reason I want to finish the book. As you say, Dez is detestable.

What you don't say is what, more than anything else, makes her detestable: she has a wonderful husband. And the only thing she knows about her lover is that he's an artist. Another reason I want to finish the book is that I hope she gives up her husband, goes off with the lover, and becomes even more miserable.

Or maybe my opinion will change by the time I finish. For now, the story is dragging for me.

Bah, a dnf. I detest those little time suckers. Here's to moving on to something a LOT better :)

Ah Dez, sometimes misunderstood in the early pages. But thank you, Nadia, for being part of the blog tour, and for writing an honest, and in many ways, positive review.

It's been fascinating for me, as the writer, to see the broad range of reactions to both Dez and her husband. Makes me realize just how subjective reading really is...

Anyway, thank you again. Happy new year to all.

Pretty great review of a book you didn't like! DNFs are hard. Hopefully there won't be any more like this!

What a disappointment! And I'd been looking forward to this one!

Heather, thanks for having me on this book tour :)

Bellezza, I know, right! Oh well. And, thanks, I'm glad I'm not the only one who can like the writing but not the character :)

Maryanne, thank you so much for stopping by. Happy New Year to you!

Holly, thanks and fingers crossed!

Lisa, it could just be me. The consensus on other blogs is rather glowing. Hope you enjoy it :)