Gossip: A Novel by Beth Gutcheon 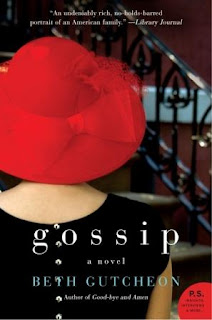 The owner of a small high-end dress shop on Manhattan's Upper East Side, Loviah "Lovie" French is the one to whom certain women turn when they want to dish in the dressing room - including Lovie's two best friends since boarding school, Dinah Wainwright and Avis Metcalf.

Outspoken Dinah made a name for herself as a columnist covering New York's most fabulous; shy, proper Avis rose to prominence in the art world with her quiet manners and hard work.  Despite their deep affection for Lovie, they have been allergic to each other for decades, uneasy acquaintances who are unwillingly bound to each other when Dinah's favorite son and Avis's only daughter fall in love.  At the center of their orbit is Lovie, who knows everyone's secrets and manages them as wisely as she can.  Which is not wisely enough, as things turn out - a fact that will have a shattering effect on all their lives.

DNF.  I just couldn't get through this book, let alone finish it.  There was just something about the way Lovie was written that I found to be rather unbearable.  She just seemed too disconnected from everyone and everything to really feel a part of the story.  The writing was good, but it somehow lacked the emotional depth necessary in captivating the reader - I did not feel captivated in the least.  Plus, I found myself rolling my eyes as Lovie recalled old memories - another story about a poor girl fitting in at a rich girls' school - ugh, again?  I swear I've just read two stories like that recently and I'm already starting to get bored with that idea, which is why I found those flashback scenes rather tired and uninspiring.

I have to admit that I'm pretty disappointed.  I had high hopes for Gossip, especially since I love women's fiction and was in the mood for some good reading.  Alas, I did not get what I wanted.  Instead of getting swept away in a drama, I got bored by an irrelevant character who somehow managed to ruin the book for me.

Of course, I could be the only one to feel this way about Beth Gutcheon's novel, Gossip - so, here is the link to the TLC Book Tour schedule.

Thanks to TLC Book Tours and the publisher for providing me with a copy of this book.

That's a real bummer! I thought about requesting this one on the tour so perhaps a good thing I did not. Very interesting storyline, but I understand just not connecting with things. I've been fortunate to only have been faced with that once this year (oops.. scratch that, twice now).
Have you heard of The House at the End of Hope Street? I received it from Netgalley and was really anticipating it. However, the storyline seemed to be pretty predictable like 10 pages in?!? So now I'm in that place where I don't know if I should reattempt it a later time, or give it up altogether. Hmm..

Beth, it was a bummer - I was really looking forward to a good story. I just couldn't connect with it. Oh well. As far as that Hope Street book you mentioned - I had heard of it, but wasn't too sure about it. I'm glad I didn't get it now - predictable at 10 pages already! That is craziness! I know what you mean though, sometimes I'm not sure if its the book or just me - maybe I'm not in the right frame of mind to read it. With this book, I just knew it wasn't going to work for me. Sometimes you just have to DNF a book :(

DNF books are always such a bummer aren't they? :( Especially when you have high hopes! I hope the next book you read is fantastic!

Jennifer, they are! Such a bummer! Thanks - so far my next read has been excellent!

Darn, I'm sorry that this one didn't work for you, but thanks for being a part of the tour.

Heather, thanks for having be a part of the tour.