GIVEAWAY AND REVIEW OF: A Conspiracy of Alchemists by Liesel Schwarz 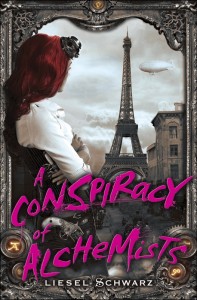 In a Golden Age where spark reactors power the airways, and creatures of Light and Shadow walk openly among us, a deadly game of Alchemists and Warlocks has begun.

When an unusual cargo drags airship-pilot Elle Chance into the affairs of the mysterious Mr. Marsh, she must confront her destiny and do everything in her power to stop the Alchemists from unleashing a magical apocalypse.

I think I like me some steampunk mixed with the paranormal - it makes for quite a fun and fascinating read.  So, I'm really happy I chose Liesel Schwarz' debut novel, A Conspiracy of Alchemists as my first foray into the genre.  And luckily for me, this book is the first in her Chronicles of Light and Shadow series.

Okay, so what exactly is steampunk?  You must be wondering, right?  Well, its basically a book with an alterna-history that usually involves airships and Victorian fashions (or at least that is what I gather).  In this book, Schrwarz upped the ante by including the paranormal - fairies, oracles, vampires and warlocks.  Talk about a fantasy book done right!

So what happens in the story?  Lots of drama and adventure!  In Conspiracy, we have Elle, a young pilot who has been offered a job to transport some rather unusual cargo to England.  However, from the start things do not go as planned.  The taxi taking her to the airstrip is going in the wrong direction and refusing to let her out.  She's confronted by dangerous and violent men who threaten her.  The box she was supposed to be transporting has been stolen.  Things are looking rather dicey for Elle - what has she gotten herself into. Well, it turns out that the worst is yet to come - her farther gets kidnapped and the truth about her family and her destiny come to light.  Seems as if Elle's family is at the center of the battle between the Light and Shadow worlds.  What will happen as she struggles to come to grips with this battle and the truth she has learned - Will Elle step up to the plate?  Sounds pretty exciting, eh?  Well, it is!

Schwarz has written a terrific book about a world filled with danger, excitement, invention, and the future.  She has created unforgettable characters, engaging story lines and a book series that is a great introduction to the steampunk genre.  I found this book to be an unputdownable read that I didn't want to end.  It was definitely the highlight of my workdays, where I would read it at lunch to escape from the monotony of data entry and office politics.

I would most definitely recommend A Conspiracy of Alchemists by Liesel Schwarz to fans of steampunk and to those who want to experience the genre for the first time.  You will not be disappointed!  I know that I can't for book 2 in the series titles, A Clockwork Heart.  And luckily for me this, book counts as a read toward the Once Upon a Time VII Challenge that I'm participating in! Hurrah!

GIVEAWAY:
Thanks to TLC Books Tours and the publisher I have one copy of this fantastic book to giveaway!  All you have to do is leave me a comment  - don't forget to include your email address (if you win, I need some way to contact you).  Last day to enter is April 10th!  Open to US/Canada residents only. Good luck!!

I would like to thank TLC Book Tours and the publisher for providing me with a copy of this book in exchange for an honest review. 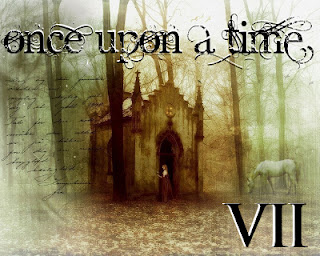 Posted by A Bookish Way of Life at 7:04 AM
Labels: A Conspiracy of Alchemists, fiction, Liesel Schwarz, Once Upon a Time Challenge, steampunk, TLC Book Tours

Steampunk is so cool, but paranormal just isn't my thing!!! Good review!

Rebecca, it is cool! The paranormal aspect was more fun than scary ;) And, thanks!

This sounds great--thanks for the giveaway!

Cheryl @ Tales of the Marvelous said...

Whew...fantasy and historical fiction and paranormal--quite the genre mash-up! I've heard good things about this one. Sounds like it was fun!

Charlotte, it is great! Good luck!

Cheryl, it was such an exciting and fun read! Good luck!

Carrie at In the Hammock Blog said...

Wow, this does sound exciting! thank you for the contest, I love steampunk books!

Carrie, it is such a fun read - you will love it! Good luck!!

I have this waiting to be read - I really have to organise myself better. For some reason it keeps getting bumped and yet I've read quite a few excellent reviews for this now! Goes away to make a list....
Lynn :D

I haven't read much steampunk yet but I love what I have read. Sounds like this book needs to be on the top of my list!

Lynn, you will love it!

Heather, you will love it!!