The Bookman's Tale: A Novel of Obsession by Charlie Lovett 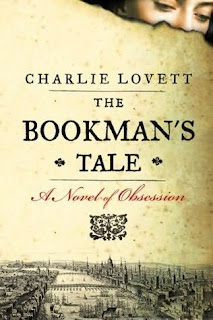 Peter Byerly isn't sure what drew him into this particular bookshop in the Welsh town of Hay-on-Wye.  Nine months earlier, the death of his beloved wife, Amanda, had left him shattered.  The young antiquarian bookseller relocated from North Carolina to the English countryside, hoping to outrun his grief and rediscover the joy he once took in collecting and restoring rare books.  But upon opening an eighteenth-century study of Shakespeare forgeries, Peter is shocked when a portrait of Amanda tumbles out of its pages.  Of course, it can't be her.  The watercolor is clearly Victorian.  Yet the resemblance is uncanny, and Peter becomes obsessed with learning the picture's origins.

Communing with Amanda's spirit as he wrestles with the mystery, Peter follows a trail of clues across the centuries - from a raucous London tavern where the unscrupulous bookseller Bartholomew Harbottle plots against the "upstart crow" William Shakespeare to the unfinished ramparts of an Oxfordshire mansion where a frustrated Victorian painter mourns his lost love and takes revenge on his book-collecting rival.  Along the way Peter discovers his holy grail:  a priceless literary artifact that could prove the truth about Shakespeare's identity.  Fearing the book may be a forgery, Peter races against time to prove its authenticity, evading the clutches of a murderer, meeting a woman who may hold the key to the mystery of the portrait, and finally discovering the truth about his own past and precious Amanda.

The Bookman's Tale is a former antiquarian bookseller's sparkling novel that is at once a deeply moving love story as well as a delightful exploration of one of literature's most tantalizing mysteries.

Books, books, and more books. Oh, plus Shakespeare, book forgery, booksellers, bookbinding, libraries, book buying trips, and about a ton of other book related acts/events occur within this spellbinding read - and I loved it all! This is the story of Peter Byerly, an antiquarian bookseller who has recently become a widow and something of a recluse.  He talks to no one, stays holed up in his English cottage, and only ventures out to get food.  His doctor has written a list of ten things that Peter should do in order to continue living, but he's just taped it to fridge and ignores it.  You see, Peter is in mourning.  His wife, Amanda, passed away and ever since then, he's taken to just being instead of living.  However, one day he winds up in a bookshop and opens a book to find a small watercolor painting of his wife.  Only it can't be his wife, since the painting is old, like from a different century old.  Except it looks just like her.  Peter feels his curiosity piqued and so he slips the painting into another book and buys it, along with a few other tomes.  He's decided that he must find out why the woman in the painting resembles his beloved Amanda.  Of course one mystery leads to another and soon enough, Peter finds himself in possession of a book that could be the greatest discovery of the literary world and he only has one week to prove its authenticity.

Talk about suspense!  Charlie Lovett has created quite the literary mystery with this novel - it will seriously have you guessing left and right.  I can usually figure things out well before the end, but this time round I was stymied.  Albeit, there were quite a few characters to keep track of, so that did make it a bit difficult.  Plus, each chapter is from a different time period, so you have to go back and forth to connect characters and events, which made for quite the puzzle.  But I loved it all.  I loved the discussion of the authenticity of Shakespeare's work - something every English lit major has come across.  I enjoyed reading about Peter's love of books and his passion for wanting to preserve a part of history through books.  I found the love story between Amanda and Peter to be heartwarming and heartbreaking.  And, I thought the mystery that linked everyone and everything together to be fascinating.  This was most definitely one of my favorite reads of the year.

I would happily recommend The Bookman's Tale by Charlie Lovett to all fans of literary fiction, Shakespeare fans, and book lovers in general.  I am positive that you will love this book as much as I did.  I'm actually interested in learning more about book forgeries and the theories regarding Shakespeare's works.  Plus, I've started daydreaming about one day owning an English cottage and becoming a bookseller.  Oh, and now I'm itching to visit libraries and museums that house these amazing antiquated books that Peter was always drooling over.  Hmmm.....I think I'm going to be dreaming about books tonight.

Thank you to the publisher for providing me with a copy of this book!
Posted by A Bookish Way of Life at 11:12 AM
Labels: bookseller, Charlie Lovett, forgery, literary, Literary fiction, novel, Shakespeare, The Bookman's Tale

This one sounds amazing. Seriously amazing.

Just requested this from Net Galley!

Holly, it really was. Made me love books even more ;)

Jennifer, you will LOVE this one!!

Lisa, yay! I can't wait to find out what you thought of it ;)

I am positive I would love it as much as you did/do. It has all he appealing qualities of mystery that keeps one guessing and books upon books. Did you dream of them after all?