I have been reading like crazy lately and I have been loving every minute of it!  Summer is nigh and I've started craving quick, easy, and fun reads.  Here are three that I've recently devoured: 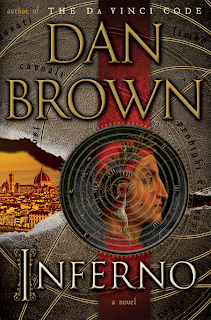 A fun and quick read that I gobbled up in two days.  I probably could have read it in one day, but I didn't want the book to end.  So, what's this new Dan Brown about? Well, I don't want to give too much away, so I'll just write this - Robert Langdon is back!  Woo hoo! Our favorite professor is once again swept away in a mysterious and dangerous mission to save humanity from possible destruction.  This time round he's missing his favorite Mickey Mouse watch and his memory - yikes!  Plus, he has no idea who to trust - his own government appears to be out to get him. What? Oh, and all of this is happening in Italy and time is running out!  Suffice it to say, I was on the edge of my seat the whole through with this book and I loved every minute of it!  Brown's latest made for the perfect weekend read - a fun adventure to get lost in. I would definitely urge all Dan Brown fans to check this one out!! 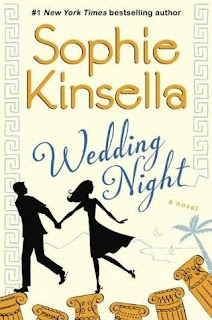 Chick lit at its best!  A fun, sexy romp filled with miscommunications, sisterly (mis)advice, rash decisions, and no sex (well, almost).  Talk about a laugh out loud read!  I absolutely loved Kinsella's latest novel involving two sisters named Lottie and Fliss.  Lottie has just found out her boyfriend of 100 years does not want to get married - and to think she bought him an engagement ring to match the one she had assumed he had bought her - and she is beyond heartbroken.  Fliss, a harried single mother, whose never-ending divorce battle with her ex, and super busy job are all put on hold when she receives her sister, Lottie's latest phone call. She's married!! Say what?  Days after the big breakup and Lottie is married to an ex-boyfriend who showed up out of the blue - WTF!!  Fliss is overcome with worry about her younger sister and decides to do what she can to end this marriage ASAP - and believe me, she does everything and anything she can think of to end this marriage!  Its pretty crazy and funny all the drama that ensues.  I laughed so much that I teared up.  And in the end, I got my happily ever after - a must have for me when it comes to chick lit.  This is one book that I would happily recommend to fans of Kinsella and the chick lit genre - you will love this book!! 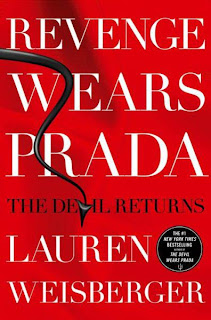 Sequels are not always a good idea.  Especially, when the story has been told and there is nothing left to tell.  After reading The Devil Wears Prada and watching the film version, I thought Andy's story was over - she was free from Miranda!!  What else was there to know?  Well, I guess I was wrong.   And, I'm so glad I was wrong, because this sequel was terrific!  I loved reuniting with Andy and finding out what had happened to her post-Runway.  She's launched a successful magazine with her new BFF, Emily - remember her, Miranda's cruel assistant that starved herself to go to Paris but didn't make it?  Crazy to believe, but Andy and Emily became besties and partners in business!  As far as her romantic life goes, Andy is about to marry the love of her life, Max.  Life couldn't get any better, except for those pesky nightmares involving Miranda; and the letter she found in her husband-to-be's gym bag; and the nausea that won't go away; plus a call from Miranda's attorney; and so many other crazy issues that just seem to pop up out of nowhere.  Suffice it to say, Weisberger has done an excellent job of bringing Andy and all of her Runway drama back to life.  I loved the book!  It was a quick, fun, and familiar read.  It made for the perfect rainy day read.  I would definitely recommend this book to fans of The Devil Wears Prada and fans of chick lit - you will enjoy getting lost in Andy's world all over again.

And there you have it - the three last books I just finished reading.  They were the perfect chasers after all of the historical fiction I've recently read.  Plus, they helped remind me that soon the sun will be blazing hot and iced cold glasses of lemonade will be my drink of choice, because summer is almost here!  What about you?  What fun books have you recently found yourself lost in?  Any recommendations for me?
Posted by A Bookish Way of Life at 7:42 AM
Labels: chick lit, Dan Brown, fiction, Inferno, Lauren Weisberger, novel, Revenge Wears Prada, Robert Langdon, sequel., Sophie Kinsella, Wedding Night

I wish I was reading like crazy. I am reading and I am reading about 3 books at once but I am not flying through them and I have yet to get the summer vibe. Maybe because my kids are still so busy. No swimming lessons either... no splashing by the pool with a book in hand. Sigh.

Ti, its crazy, but I've just been so bored with TV lately that I've been consuming books like crazy. I love it! Don't worry, I'm soon you will get the reading bug, too :) Once summer really is here, you'll be longing for some fun beach reads and the next thing you know, you will have read three in one sitting :)

I'm really looking forward to Inferno, even though I wasn't a huge fan of The Lost Symbol. I'm glad to see you enjoyed it! Methinks I'll wait to read it until I have time to read most of it in one sitting!

nomadreader, you will enjoy it. I wasn't a huge fan of the last book either, but I still found myself wanting to visit DC as a result. This one makes me want to go back to Italy :)

Been wanting good chick lit and I think this is the post that's pointing me in the right direction :P

You've certainly been having good luck with books lately!

Aloi, definitely check these out - you will have a LOL time reading them :)

I do so like the mix of genres! lovely choices.

I'm so happy for you that you have had time for reading! I keep thinking I will, but while in the Northwoods of Wisconsin with my parents there's been more talking than reading. Sophie Kinsella always made me laugh with her Shopaholic series, I loved Dan Brown's thrillers, and I received Revenge last week. So, I'm glad to know your thoughts on these three.

Bellezza, sometimes talking is just what we need :) Enjoy your chats with your folks - those are the best kind.