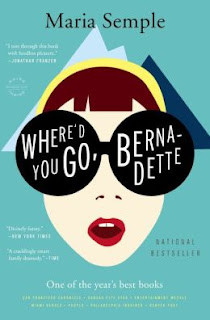 When fifteen-year-old Bee claims a family trip to Antarctica as a reward for perfect grades, her fiercely intelligent but agoraphobic mother, Bernadette, throws herself into preparations for the trip.  Worn down by years of trying to live the Seattle life she never wanted, Bernadette is on the brink of a meltdown.  As disaster follows disaster, she disappears, leaving her family to pick up the pieces.  Which is exactly what Bee does, weaving together emails, invoices, and school memos to reveal the secret past that Bernadette has been hiding for decades.  Where'd You Go, Bernadette? is an ingeniously entertaining novel about a family coming to terms with who they are, and the power of a daughter's love for her imperfect mother.

OMG!  What the frack took me so long to read this wonderfully, delightful novel?  I must have been hiding under a huge rock, because I don't know what I was thinking by putting off reading Where'd You Go, Bernadette?.  This book is awesome!! Its filled with fantastic characters, entertaining story lines, and an intriguing mystery - the epitome of a must-read!

We have Bee, this terrific smarty of a kid who has decided to hit her parents up for THE best reward ever - a trip to Antarctica!  She's only been getting straight A's since she could talk and has had to deal with some serious health issues when she was a baby, plus, she's always helping other kids at her school.  She's seriously the bee's knees.  So, of course her parents' agree to the trip.  As the days get closer to the departure date, family tensions start to arise.  Bee's dad is crazy busy at work on his HUGE project that will revolutionize technology, medicine, the world!  He's caught up in his own world and barely begins to take notice of his wife's slightly off behavior, such as never leaving the house, falling asleep at the drug store where she is picking up an anti-psychotic prescription, ordering endless supplies for a trip that she has yet to pack for, calling all the women at school gnats and putting up a huge sign calling them gnats, and unknowingly handing over her family's financial, personal information to a scam artist online.  Yeah, Bernadette isn't acting on par lately, then again she hasn't been for quite some time.  Bernadette has a secret about her past that she is wanting to forget, which is why she eagerly agreed to relocate her family to Seattle.  She wanted to escape her old reputation and start fresh.  However, things have not been going to plan, as Bernadette has never been able to reconcile with her past.  As things begin to escalate, Bernadette does a runner, leaving behind a brokenhearted family.

Now, that is all I'm going to say about the story, because everyone already knows what happens (as the world has already devoured this delicious novel) and the few that don't shouldn't have the plot spoiled for them.  This is one book that you must read for yourself so that you can pour over the emails, letters, and memos in the book that make up Bernadette's story.  You will gobble it up and love it!  So, please check out this book - I promise you will be delighted you did.
Posted by A Bookish Way of Life at 7:37 AM
Labels: Bernadette?, fiction, Maria Semple, novel., Where'd You Go

I love it when you get all crazy over a book! Have to read it!

I don't think I knew what this book was about until I read your review. I never paid much attention to this book before. Great review! Sounds like one I would enjoy.

Jennifer, I had no clue what I was getting into when I first started reading this book, so it was definitely a nice surprise. I hope you enjoy it as much as I did ;0

LOL What took you so long indeed! I'm so glad you loved this one. I thought it was absolutely delightful!! :D

I was listening to the audio and having so much fun with this one. Unfortunately it was a library audio so it expired and I'm on waiting list to get it back to finish it. I'm where they are following her footsteps in Antarctica. How does it end!! Don't tell me!

Totally how I felt. I doubted the book could be as good as everyone said, but I was totally wrong! I'm so glad I finally caught up with the rest of the crowd.

I'm one of those, too. . . you know, the holdout on this book. I do have a copy I borrowed from the library but I've just been holding out. . . I guess I shouldn't!

I have no idea why I haven't read this yet! I've also heard that the audiobook is pretty fantastic. Will have to stop procrastinating!

I am so glad that you loved this one. I thought the same about this one - it was just awesome!

Ladies, this book was awesome!! I'm so happy to see the love for it ;) And for those of you still holding out - read the book! You will love it!!!