“Now, you may or may not have noticed, but we appear to be on fire…”

On a windswept northern shore, at the very tip of what will one day become Scotland, the islanders believe the worst they have to fear is a Viking attack. Then the burning comes. They cannot run from it. Water will not stop it. It consumes everything in its path – yet the burned still speak.

The Doctor is just looking for a game on the famous Lewis chess set. Instead he encounters a people under attack from a power they cannot possibly understand. They have no weapons, no strategy and no protection against a fire sent to engulf them all.

Add in some marauding Vikings with very bad timing, a kidnapped princess with a secret of her own and a TARDIS that seems to have developed an inexplicable fear of water, and they all have a battle on their hands. The islanders must take on a ruthless alien force in a world without technology; without communications; without tea that isn’t made out of bark. Still at least they have the Doctor on their side… Don’t they?

A thrilling new adventure starring the Doctor, as played by Matt Smith in the acclaimed Doctor Who series from BBC Television.

Fellow Whovians, if you are looking for something new and exciting to read, then check out Jenny T. Colgan's book, Dark Horizons.  There are Vikings, chess, deadly aliens, and the eleventh Doctor- all of which make for a fun and engaging read!  Plus, Matt Smith graces the cover - pretty cool, eh?  He may not have been my favorite Doctor Who, but I think he did splendid job of adding a bit of wackiness to the role.

Anyhow, let me tell you a bit about the book and why I think you should read it.  In this adventure, the Doctor is traveling on his own in search of a chess partner, when he suddenly (and accidentally) finds himself in the midst of a small village and the Vikings.  Talk about taking a wrong turn!  He quickly surmises that the Vikings are under attack, and decides to help - after all, Doctor Who wouldn't be the Doctor if he didn't offer up his services, right? Along the way he meets up with some interesting characters - two of them make for interesting stand-in companions (Freydis and Henrik) and manage to grow on you by book's end. Plus, there's the sweet boy, Luag, who he spends time with at the beach - I swear this kid makes the Doctor even more compassionate than he already is.  Oh, and there is occasional miscommunication between parties that made me laugh out loud.  And, there are some fight scenes that would make for good TV.  Overall, this story has it all - drama, danger, and Doctor Who.  Now, if that combination alone isn't reason enough to read this book, then I don't know what is.

The writing is terrific, the characters are interesting, and the story is fascinating.  Jenny T. Colgan has done a superb job of creating an authentic Doctor Who novel that will leave fans feeling more than satisfied.  I would definitely recommend Dark Horizons to fans of Doctor Who and fans of science-fiction.   You will LOVE this book!

Here's the link to the TLC Book Tour page for: Dark Horizons 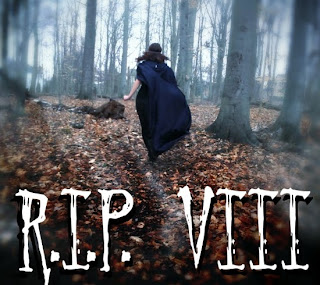 Second book down and only two more to go. Cripes! I am a reading machine when it comes to R.I.P. VIII.
Posted by Nadia at 8:28 AM
Labels: Dark Horizons, Doctor Who, fiction, Jenny T. Colgan, novel, R.I.P. Challenge VIII, science-fiction, TLC Book Tours

Oohoo this sounds like it is right up my alley! I can't wait to read it! Thanks for being on the tour. I'm featuring your review on TLC's Facebook page today.

Heather, you will love this one! It is terrific! I'm so glad I got to be a part of the tour :) Thanks!