Help For The Haunted: A Novel by John Searles

It begins with a call one snowy February night. Lying in her bed, young Sylvie Mason overhears her parents on the phone across the hall. This is not the first late-night call they have received, since her mother and father have an uncommon occupation: helping “haunted souls” find peace. And yet something in Sylvie senses that this call is different from the others, especially when they are lured to the old church on the outskirts of town. Once there, her parents disappear, one after the other, behind the church’s red door, leaving Sylvie alone in the car. Not long after, she drifts off to sleep, only to wake to the sound of gunfire.

As the story weaves back and forth through the years leading up to that night and the months following, the ever-inquisitive Sylvie searches for answers and uncovers secrets that have haunted her family for years.

Capturing the vivid eeriness of Stephen King’s works and the quirky tenderness of John Irving’s novels, Help for the Haunted is told in the captivating voice of a young heroine who is determined to discover the truth about what happened on that winter night.

Help For The Haunted by John Searles ROCKS!!! I loved this book!  It is by far one of my favorite reads of the year! I sat down to read the book one late afternoon, but as soon as the dark sky appeared I stopped reading.  I had to! My mind was starting to run amok with killer dolls and basements filled with horrors - UGH!  And I knew if I kept reading late into the night that I would wind up having a fright attack and that just wouldn't do.  So, bright and early the next morning I resumed my reading and did not stop until the last page was turned.  Even with daylight, I still got chills while reading the book - it was thrilling! Talk about an exciting reading experience!

So, why did I love this book so much?  What terrified me to the point that I could only read it during daylight hours?  How about - everything!  This book is simply fantastic!  It has an intriguing mystery, crazy fascinating characters, a super creepy doll named Penny, and lots of dramatic events unfolding at a snail's pace - it is the perfect horror mystery you will ever read!

Sylvie and Rose Mason are sisters.  After their parents are murdered they are left to their own devices.  Rose being the eldest and of age, is deemed  Sylvie's legal guardian.  Of course, being sisters who have never gotten along, things aren't going so well in the Mason household.  Rose simply does not want the responsibility of dealing with Sylvie and her doctor's appointments, school troubles, and the hassle of feeding and clothing her.  She just wants to drive off in her huge truck and do who knows what.  Sylvie actually wants her sister to take care of her - she needs someone to look out for her now that she is parent-less and friend-less.  Its pretty heartbreaking to read.  Especially when the two girls still have to deal with the aftermath of their parents' murder.  You see, Sylvie is the lone witness and has identified the murderer - so, she needs to prepare for trial.  The only problem is that Sylvie has a secret about that night - a secret between her and Rose.  To add even more drama to the situation, a new witness has come forward claiming to provide an alibi for the accused killer.  Talk about throwing doubt up in the air.

As the story progresses we learn more and more about the Mason family - we find out about Sylvie's parents' occupation, we find out about Penny (that damn doll that creeped me out!), we find out about Rose and the boarding school she was sent to, and we find out the truth about what happened that night Sylvie's parents were murdered.  This book is dark, creepy, and makes your heart thump loudly the deeper you get into the story.  I found myself thinking all sorts of crazy things and wondering how a couple like the Mason's would choose to bring their work home with them - why subject their own daughters to their misunderstood, but extremely horrific type of work.  It was baffling to me.  At the same time, I was rather intrigued with the idea of growing up with parents who provided 'help for the haunted' for a living - talk about an unconventional upbringing, I'm sure!

Now, I'm not going to delve into any specific details that will reveal what truly happened that snowy night or who Sylvie saw in the church or why the basemen light suddenly came on again - nope, I'm not going to tell you.  Why?  Because you have to read this book for yourself and get completely shocked like I was.  Though I did figure some things out, I definitely didn't see that ending coming at all!  It was a huge WTF moment for me and I relished it, because I loved being surprised by this author's storytelling at every turn (especially at the end).

And, here's the link to the TLC Book Tour page (that way you can read all of the other glowing reviews for this terrific new book): Help For The Haunted 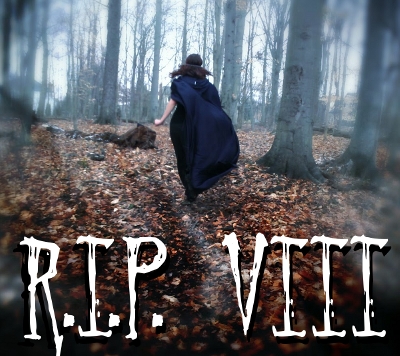 Lucky number seven! Yep, this is my seventh read for R.I.P. VIII and it was the perfect read for the challenge! I mean it! This book had everything - mystery, murder, people who provided 'help for the haunted', a scary basement, and a creepy doll.  What more could I have asked for?  And now, I'm off to read something that is not for R.I.P. VIII and that won't cause me to have nightmares.  You know, something that doesn't have possessed people in it.  Ta for now!
Posted by Nadia at 3:36 PM
Labels: fiction, Help for the Haunted, John Searles, novel, R.I.P. Challenge VIII, spooky., TLC Book Tours

Sounds great....put it on order at the library - THANKS!!

I love the sound of this book...the perfect read for the RIP challenge. I've seen this around the book blog community a lot but yours is the first review I've read and I'm so glad I did. You hooked me...I wish I'd chosen to review this book for TLC Book Tours now. Silly me!

Vintage Reading, you will love this read - it is so good!

Amy, definitely! Hope you love it as much as I did ;) And, that's happened to me before, too - I've passed on a book and later wish I hadn't.

Wow, what a great review, you've made me really want to read this book!