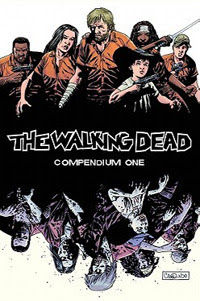 As a huge fan of the television show, The Walking Dead, it was only a matter of time before I sank my teeth into the comic books.  Luckily, I was able to get my hands on the first compendium, which contains issues 1 thru 48. Right now I'm in the middle of the book (which is over a thousand pages long!) and have just been introduced to the Governor over at Woodbury.  Suffice it to say, he is just as evil as the the character from the TV show (if not even more evil). As for Rick, I am just loving getting to know him and seeing how much he's changed from when he first found out about the "Roamers".   I have to admit to being surprised by some of the events in the comics and how much they differ from the TV show.  Makes me think that the show's creators are having fun with the direction they are taking the characters' and their stories - especially as Robert Kirkman (creator of The Walking Dead comic book) is a writer and executive producer on the show.  I honestly can't wait to see where the comic books take Rick Grimes and his gang.  I've already ordered the second compendium and wish listed the third (which comes out later this year). 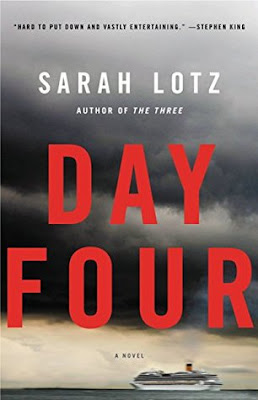 You all know how much Lotz' book The Three creeped me out - I couldn't sleep for days!  So, when I found out about her latest book, Day Four - well, I just had to kindle it ASAP!  It came out today and I've already started reading it.  I just know its going to keep me awake tonight, but I don't care.  I have to find out how she connects the characters from The Three with this new book, which is being referred to as the sequel.  I'm eager for all the chills and thrills that Lotz is going to throw my way with this new story.  I can't believe that I want to be creeped out again, but I do.  And, supposedly this story raises the creep factor to another level - YIKES! So what is this new book about?  According to Goodreads:

"Four days into a five day singles cruise on the Gulf of Mexico, the ageing ship Beautiful Dreamer stops dead in the water. With no electricity and no cellular signals, the passengers and crew have no way to call for help. But everyone is certain that rescue teams will come looking for them soon. All they have to do is wait.

That is, until the toilets stop working and the food begins to run out. When the body of a woman is discovered in her cabin the passengers start to panic. There's a murderer on board the Beautiful Dreamer... and maybe something worse."

Sounds pretty awesome, eh? I know I can't wait to read more of Lotz' book and find out what is really happening on the Beautiful Dreamer.  As for The Walking Dead - I'll dip into that again tomorrow.  I'm going to need something light to read after tearing through whatever dark and twisted tale Lotz has created this time round.  Happy reading!!
Posted by Nadia at 5:03 PM
Labels: comic book, Currently Reading, Day Four, fiction, horror, novel, The Walking Dead

Okay. I wasn't all that impressed with The Three but Day Four sounds really good.

I keep waiting for the teasers to air for the Walking Dead spin off but I haven't seen any and they are supposed to air in July.

Ti, I really loved The Three. It was formulaic, but it definitely creeped me out and that is what I loved about it. This one sounds so good! I'm loving it so far!! I can't wait for the teasers for TWD - I love that show! I hate that we have to wait until October to see it - ugh!