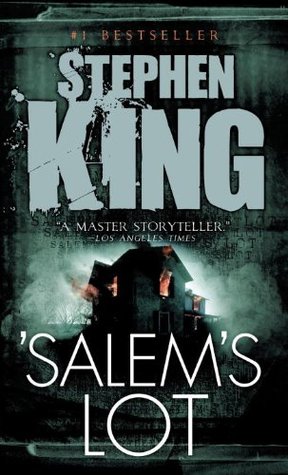 Something strange is going on in Jerusalem's Lot ... but no one dares to talk about it. By day, 'Salem's Lot is a typical modest New England town; but when the sun goes down, evil roams the earth. The devilishly sweet insistent laughter of a child can be heard echoing through the fields, and the presence of silent looming spirits can be felt lurking right outside your window. Stephen King brings his gruesome imagination to life in this tale of spine-tingling horror.

My first read for R.I.P. X is 'Salem's Lot by Stephen King.  A novel about the Undead, this story introduces us to Ben Mears, a man determined to write a book about a town that has haunted him for years - Jerusalem's Lot aka 'Salem's Lot.  What exactly haunted this man?  Let's just say, he saw something that he was never able to un-see and its stayed with him ever since.

Now a published author, Ben returns to a town that remains pretty much unchanged and settles into a room at the local boarding house, where he spends his time writing and writing.  His inspiration for his book is the Marsten House - an abandoned house that inspired his nightmares as a child.  Of course, the house is no longer abandoned.  Its been bought by a man named Kurt Barlow, whom no one in town has ever seen or met.  Barlow's partner, Straker, is the one renovating the house and setting up a new shop in town.  Seems the duo has some plans for a new life in 'Salem's Lot.  However, things get a bit complicated for Barlow and Straker when Mears and his gang figure out the evil and horrific changes being set in motion by the new duo.  Seems that vampires are set to be unleashed once again in 'Salem's Lot.  Yep, again!  Apparently, the Lot has been vampirized before and the older folks aren't in the mood for a battle of good v. evil.  So, they just wear their crosses around their necks and shut the curtains - or they pack up and leave town (like the town Sheriff plans to do).  Mears and his gang are the only ones willing to risk their lives to save the citizens of the Lot, but their fight will definitely come at a huge cost to them all.  And that is all I will say about this King classic.

A story about vampires, a small town, and an unlikely hero - what more could I ask for?  The writing was terrific!  I couldn't put the book down!  Of course, I also wound up having nightmares after reading it.  I always seem to sleep a little less when I read something by King.  There's just something about his writing - it creeps up on you.  'Salem's Lot was not a scary book, but the way he wrote it made it scary.  All those rich, vivid details made it easy to imagine Straker, Barlow, and the horror unleashed on the Lot.  I couldn't help but get caught up in the fright of it all, which is what I loved about the book!

Now, I'm off to continue reading the four novellas in Different Seasons by King. I'm in the middle of The Body, which was adapted into the film Stand By Me.  Not sure if I'll write about any of these stories for R.I.P. X, but I do know that I'm definitely enjoying them.  Hope you all are having a great weekend.  Happy reading!!

This was the first Stephen King book I ever read, and it's still one of my favorites. I loved the characters...and the tension he creates. Definitely a great R.I.P. read!

Lark, what a great first book to read by King. I loved it! It was the perfect read for R.I.P. :)

I'm glad your first RIP pick was a success! Somehow I ended up reading King's first three novels in publication order as a teen, and this one was #2. Loved it! I don't re-read often, but this one would be a contender.

Andi, me too! I know what you mean, I don't re-read either, but some books are definitely worth another go. I love that you read the first three in order of publication unknowingly :) I would probably plan to do that with an author - or at least I would have. Nowadays I just pick up whatever catches my fancy.

Oooh, you totally have me in the mood to read (reread?) Salem's Lot! I think I read it in high school, but that was so long ago I can't be sure. Plus, King's writing as scared me so often I think I've abandoned more than I've read. The Stand...It...many others.

I'm loving autumnal reading such as this. Are you reading The Quick for the Estella Society's read-along? I'm halfway through and loving that!

M, I love that! I can definitely understanding abandoning the book - they can get really creepy (like under your skin scary). I loved The Stand! Autumnal reading is my favorite type of reading. Puts me in such a mellow and happy mood. I've read The Quick and absolutely loved it. Such a great book about vampires. I'm glad you are enjoying it :) Hope you have a great week!!