Read-Along of Emma by Jane Austen: Volume 1 and part of Volume 2 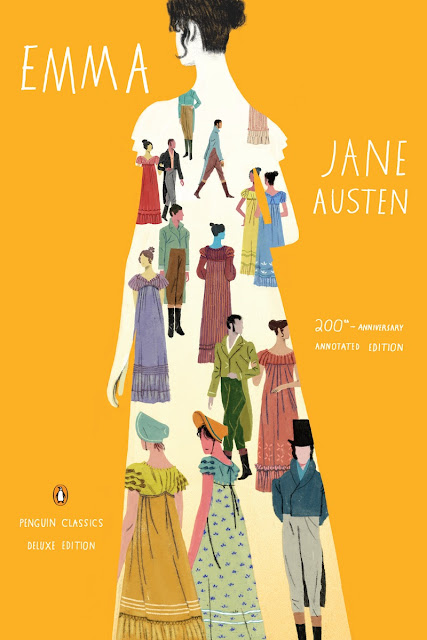 Finally! I've managed to get through volume 1 and am now midway through volume 2.  For some reason, I just could not engage with this story at first.  I found it too slow-going and was tempted to give up on the book.  And then, I found myself falling in deep with Emma, Knightley, and Harriet. I am hooked.  I find myself dipping in and out of the story throughout the day.  Part of me wants to keep reading until the end, but the other part enjoys following the pace of  Dolce Bellezza's read-along.  Hmm...curiosity may get the best of me and I'll probably wind up finishing the novel by day's end.  Anyhow, here are my thoughts on what I've read so far:
And now, I'm at the part where Miss Bates wants to show the women and Churchill the mystery pianoforte.  Emma had gone into town with Harriet and bumped into Churchill and her BFF.  The two were going to visit the Bates and ask Emma to join them.  She tells them to go ahead without her.  Not a moment later she finds herself, along with Harriet, Mrs. Weston, and Churchill being ushered inside the Bates' home.  Of course before entering the house, they were privy to a story involving Knightley and his apples.  Apparently, he sends the Bates a bushel of apples every year.  They absolutely love these apples.  Miss Bates mentions how they are nearly out of the apples, since she's been making treats for her niece every day.  Knightley tells her he will send her some more.  Jane gets upset with her aunt - why did she have to mention anything to Knightley?!  Miss Bates finds herself opening the door to more than a bushel of apples.  Seems that he sent the rest of his stash to them and has left himself without any apples.  Talk about providing for your one true love...or not?  Hmm...what does this kind act mean?  Is Knightley just being a good neighbor or is there more to those apples?  And what does Emma make of this story?  Is she losing Knightley to Jane?  I can't wait to find out what happens next!  So, I'm off to read some more.

I love your bullet points and observations! Even after finishing the novel, which I did just yesterday, I can't say that I like Emma as some readers do. I like Jane. I like Mr. Knightley, a lot! But, Emma? I think I'll always perceive her as meddlesome and annoying, even though I'm sure she's well intentioned. I ended up liking this book very much, even though it is slow. I think that's just the way Victorian authors are, and I have to slow my pace to match theirs or we'll never get along. So glad you got hooked!

M, thanks! I can definitely understand not liking Emma - she is beyond meddlesome and always thinking she knows best (when really she knows nothing). I love Knightley. I'm not so sure about Jane just yet, but time will tell. I'm so glad you wound up enjoying this book - I was a bit reluctant to read it at first, but am so glad I'm reading it. Thank you for hosting this read-along! I think you are right about Victorian authors - everything takes time to happen (too much time!). I'm glad I got hooked, too :)

I feel like I could just copy and past Bellezza's comment! I finished Emma yesterday, too...downloaded the audio in preparation for 6 hours in the car. I ended up loving the book, but not really caring for the main character.

JoAnn, I'm planning on finishing the book this weekend. I just have to find out what happens between Emma and Knightley. I'm so glad you loved the book :) The more I read, the more I can definitely understand disliking Emma - LOL!

I love this summary of the book so far! You've really put each story line in a nutshell. I can't dislike Emma for her fatal flaw of pride, being prone to it myself, unfortunately! So far, she is a much more interesting and entertaining character than Jane Fairfax, although I expect she will be sensible enough in the end to overcome her inferiority complex around Jane and they will become fast friends!

Laurie, thanks so much! You make a good point about her pride being her flaw - it really is. And as much as I dislike her at times, there are moments when I can relate to her musings. She's definitely an interesting character, whom I'm thinking I'll wind up loving by novel's end. Jane Fairfax appears rather dull to me at the moment - although her insistence about walking to the post office is rather interesting. Hmm...I wonder what letters she's hiding? I'm with you and hope that Emma gets over being jealous of Jane and that they become fast friends. My fingers are crossed for Emma and Knightley :)