Year of Yes: How to Dance It Out, Stand in the Sun, and Be Your Own Person by Shonda Rhimes 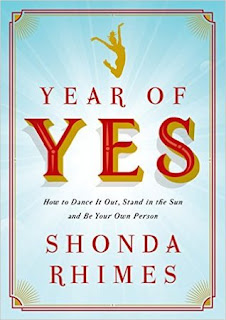 It was Thanksgiving morning.  Shonda was in the kitchen with her older sister, Delorse, who was busy making their turkey dinner.  While Delorse chopped vegetables, Shonda told her all about the exciting invitations she'd recently received.  She was trying to impress her sister.  It didn't work.  Instead of oohing and ahhing over the invites, Delorse muttered these six words to Shonda: "You never say yes to anything."And with those six words, the Year of Yes was born.  Actually, the beginning of the Year of Yes happened weeks later, but it was those six words that led to a new Shonda.

You see, Shonda Rhimes is THE Shonda Rhimes.  The creator, writer, and executive producer of the hit TV shows, Grey's Anatomy, Scandal, How to Get Away With Murder (and the now defunct Private Practice).  Shows that I absolutely love and continue to watch with excitement each new season.  Her shows make up ABC's popular TGIT (Thank God It's Thursday) night lineup.  Without Shondaland (Rhime's production company) there would not have been a Meredith and Cristina - the dark and twisty duo who are the ultimate BFFs.  There would be no dream of Vermont and jam.  No one would be getting Poped, Standing in the Sun, or Dancing It Out.  So, to say that she's successful - well, that's putting it lightly. So yeah, Shonda Rhimes seemed to have it all.  Except she was miserable.  She was unhappy.  The vibrant, happy person she used to be was gone and she had no idea when she disappeared.  "You never say yest to anything" popped in her head once more.  And then she knew it was true and she knew what she had to do.

So began, the Year of Yes.  For one full year, Shonda would say "yes" to anything and everything that scared her.  Her first yes was to Dartmouth, her alma mater.  They phoned to see if she would give the commencement speech and she agreed.  Luckily, she had six months to freak out about it.  Her next yes was to Jimmy Kimmel.  His show had called several times asking for her to be on, but "no" was Shonda's go-to response.  Live television was not her bag - so many things could go wrong (like she could trip and fall or much worse).  She mulled it over in her head, imagining the worst and then she finally agreed to do it.  The only condition - it couldn't be live television.  And guess what?  They agreed! Talk about saying yes and getting what you want.

I absolutely loved this book!  I loved getting to know Shonda through this journey of hers.  She said "yes" and so much changed in her life and within her self.  It was such fun to read about.  I loved how open she was about being a liar.  She makes things up for a living and somehow her penchant for storytelling bleeds into her personal life (not on purpose, but it just does).  According to her, she's old and her memory is fuzzy, so sometimes she "lays down track" to fill in the story's holes.  And so she writes about the truths she remembers.  This book is made up of those truths and they are fascinating!
Here are just a few:
There is so much more in this book that I loved, but I won't share it all.  You should experience it for yourself.  Year of Yes is a wonderful book to engage with.  It will have you laughing, smiling, and shaking your head in agreement.  It is so inspiring to see a strong, independent, successful woman openly admit to being unhappy and doing something to change that.  She writes about the fear, the ugliness, and the pain that it took to finally become her own person.  Shonda finally danced it out and stood in the sun!

Isn't it great when a book finds you just when you need it.  I have to admit to being in a rut of sorts lately (actually, for quite some time).  Reading this book really opened my eyes to the changes I need to make in my own life.  I've let fear hold me back for much too long.  A Year of Yes is definitely what the doctor ordered.  Wish me luck!!

And now I'm off to read A House of My Own by Sandra Cisneros.  Happy reading!!

Posted by A Bookish Way of Life at 10:15 AM
Labels: and Be Your Own Person, autobiography, How to Dance It Out, memoir, Shonda Rhimes, Stand in the Sun, Year of Yes

I SO want to read this book. It seems like a worthwhile companion to The Life Changing Magic of Not Giving a F*ck, in fact. That might seem odd, but it's really about coming to terms with priorities, and if your priorities are to be more adventurous and give a f*ck about that, then YES! Sorry, that might've been a weird comment. You got a stream of consciousness version of what's in my head. lol

Andi, you are spot on! I love stream of consciousness :) I've heard so much about the Kondo book and its magic, that I'm almost tempted to read it. I remember your post on Knight's book and loved it! Definitely makes you think about prioritizing your life so that you don't stress over all the little f*cks that don't really matter to you (but that you can't help but obsess over.) Definitely check out Shonda's book - you will LOVE it!!

This sounds SO good! I love the idea of being more open to things in life; it's something I need to work on...after all, it's the things we say yes to that determine our destination in life, the noes just lead nowhere. I've put this book on reserve at the library and am anxiously waiting for it to be my turn. :) Thanks so much for reviewing this book!

Lark, definitely read it and let me know what you think! You will love it!! And you are so right - being open to things leads to a richer,fuller life - something I need to work on as well. So glad you enjoyed my post - thanks!!

Great review! I've seen this book around but never realized the author worked in TV. I've never seen any of those shows, so I still really don't know what she does but I have an idea. I'm intrigued by the premise of the book.

Ahhhhhh, this sounds amazing! Great review. I might have to crack this one open earlier than expected :)

Kathy, thanks! Yeah, if you don't watch those shows, then you probably don't know who Shonda Rhimes is - from my post, you can tell that I love those shows :) Definitely check out the book. Regardless of her shows, her story at finally becoming her own person is fascinating. You will definitely enjoy Year of Yes.

The Bibliophile Belle, it is amazing! Thanks! You will definitely love this book - its so inspiring and exciting! Enjoy :)

I don't watch these shows so don't know anything about the author, except what you wrote here. It sounds like saying yes is working for her, and I hope her children's father is involved with them.

Terra, saying yes is definitely working for her. She adopted her kids, so she's their parent. And those are terrific if you love lots of drama, which I do.