Even the Dead: A Quirke Novel by Benjamin Black 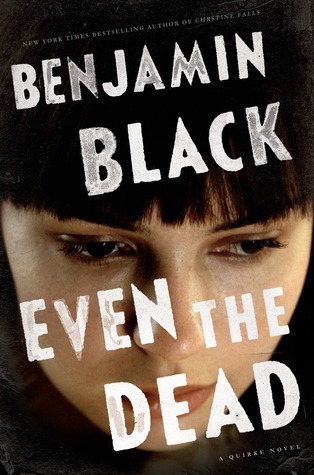 A suspicious death, a pregnant woman suddenly gone missing: Quirke's latest case leads him inexorably toward the dark machinations of an old foe

Perhaps Quirke has been down among the dead too long. Lately the Irish pathologist has suffered hallucinations and blackouts, and he fears the cause is a brain tumor. A specialist diagnoses an old head injury caused by a savage beating; all that's needed, the doctor declares, is an extended rest. But Quirke, ever intent on finding his place among the living, is not about to retire.

One night during a June heat wave, a car crashes into a tree in central Dublin and bursts into flames. The police assume the driver's death was either an accident or a suicide, but Quirke's examination of the body leads him to believe otherwise. Then his daughter Phoebe gets a mysterious visit from an acquaintance: the woman, who admits to being pregnant, says she fears for her life, though she won't say why. When the woman later disappears, Phoebe asks her father for help, and Quirke in turn seeks the assistance of his old friend Inspector Hackett. Before long the two men find themselves untangling a twisted string of events that takes them deep into a shadowy world where one of the city's most powerful men uses the cover of politics and religion to make obscene profits.

Even the Dead--Benjamin Black's seventh novel featuring the endlessly fascinating Quirke--is a story of surpassing intensity and surprising beauty.

This is my first book by Black (aka John Banville) and it certainly won't be my last.  I know its strange to read the seventh book in a series first, but I couldn't help myself.  When I was offered the chance to review Even the Dead, I jumped at the chance.  Why?  Well, I'd always wanted to read Banville writing as Black; and I'd heard so many great things about the Quirke series that I knew I would be in for a treat.  How right I was!

In the seventh novel featuring the quirky pathologist, Quirke, we find him worried over his health.  He believes he has a brain tumor and is destined to die very soon.  His doctor disagrees and simply  urges him to take a rest -the horror!  Not one for taking breaks, Quirke immediately agrees to offer his assistance when asked for help.  Soon enough he finds himself entangled in a few new mysteries - both personal and professional.   With the help of his friend, Inspector Hackett, the duo are soon digging for information and answers.  Of course, the more you dig, the more danger you encounter.

A light and engaging read, this book made for the perfect companion on a cold, grey morning.  Sitting with my cuppa and this book in hand, I found myself ignoring everyone and everything around me.  I was in deep.  I was in Dublin with this new-to-me cast of characters who were strong, smart, and slightly odd.  I loved getting to know them and reading about the mysteries they were bent on solving.  It was such a fun treat to read this captivating story.  I absolutely enjoyed getting caught up in all of it - the suspense and thrill haunted me long after.

Even the Dead is a book that I will happily recommend to fans of the Quirke series and fans of mystery novels.  You will love this book! I know that I can't wait to read the rest of this fantastic new-to-me series.

Posted by A Bookish Way of Life at 3:45 PM
Labels: A Quirke Novel, Benjamin Black, Even The Dead, fiction, mystery, novel, series, suspense

These are the kinds of mysteries I like best; glad to have a new author to read. Thanks! :)

Lark, me too! I love mysteries with quirky characters - they make for the best kind of reads :)