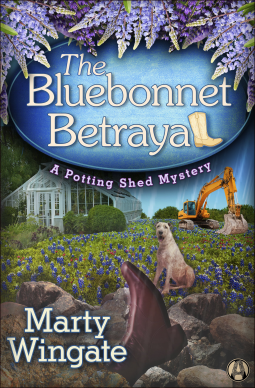 and absolutely loving it! As a huge fan of Wingate's cozy mystery series, A Potting Shed Mystery (and her other series, A Birds of a Feather Mystery), I was thrilled to get approved for an ARC of her latest book in the series - thank you, NetGalley!  Last time (in Between a Rock and a Hard Place) Pru Parke was planning her wedding to DCI Christopher Pearse, while tackling a new short-term gig working at the Royal Botanic Garden in Edinburgh.  Of course, everything turns to chaos when Pru stumbles upon a dead body and she's suddenly being questioned as the possible suspect. Ack!  In the end, she's finally married to her true love Christopher, and her investigative skills have helped to  capture the real murderer. Talk about a happy ending!

Well, this time round, Pru's Texan roots will be showcased in the latest mystery, The Bluebonnet Betrayal - hurrah!  According to the summary from NetGalley:

"Pru's life in England is coming full circle. A Texas transplant, she's married to the love of her life, thriving in the plum gardening position she shares with her long-lost brother, and prepping a Chelsea Flower Show exhibit featuring the beloved bluebonnets of the Texas hill country. Technically, Twyla Woodford, the president of a gardening club in the Lone Star State, is in charge of the London event, but Pru seems to be the one getting her hands dirty. When they finally do meet, Pru senses a kindred spirit—until Twyla turns up dead.

Although Twyla's body was half buried under a wall in their display, Pru remains determined to mount a spectacular show. Twyla would have insisted. So Pru recruits her husband, former Detective Chief Inspector Christopher Pearse, to go undercover and do a bit of unofficial digging into Twyla's final hours. If Pru has anything to say about it, this killer is going to learn the hard way not to mess with Texas."

How exciting does that sound?  Well, it is!  I am just loving catching up with Pru and her husband DCI Pearse.  And now, I'm off to continue reading The Bluebonnet Betrayal by Marty Wingate.  Happy reading!!
Posted by A Bookish Way of Life at 9:12 AM
Labels: A Potting Shed Mystery, ARC, cozy mystery, Currently Reading, fiction, Marty Wingate, mystery, NetGalley, novel, series, The Bluebonnet Betrayal

Gardens, Scotland and a mystery are great elements in a book.

Terra, most definitely! Such a great series!!