The Reader on the 6.27 by Jean-Paul Didierlaurent 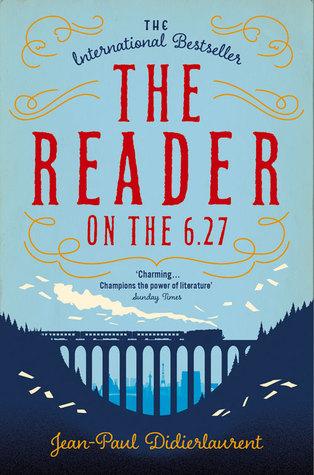 Love is a journey...

Guylain Vignolles lives on the edge of existence.  Working at a book-pulping factory in a job he hates, he has but one pleasure in life...

Sitting on the 6.27 train each day, Guylain recites aloud to a rapt audience from pages he has saved from the jaws of the pulping machine.  But it is when he discovers the diary of a lonely young woman, Julie - a woman who feels as lost in the world as he does - that his journey will truly begin.

What a delightful story! I absolutely enjoyed The Reader on the 6.27.  It was such a treat to read.  I sat down with a cuppa and settled into Didierlaurent's story about a man named Guylain.

Guylain hates his job.  He loathes it.  Every day he wakes up and takes the train to TERN, where he is in charge of The Thing  - a machine/monster that devours books.  Truckloads of unread/unsold books are delivered to the factory and dumped right at  the mouth of The Thing, ready to be gobbled up and spat out in pulp form.  Its a nightmare for Guylain, especially as he is in charge of The Thing.  Plus, his co-worker Brunner, is eager to take over and start pushing buttons on The Thing - he loves pulping books. And the boss, Kowalski, is a tyrant who yells at everyone and demands for The Thing to pulp as many books as possible.  Guylain's only respite from The Thing, Brunner, and Kowalski is lunchtime.  He takes lunch with his friend, Yvon the security guard - an older man who only speaks in alexandrines.  And so, Guylain's days bleed into each other: waking up, getting to work, pulping books, feeding his fish, sleep.  Except, there is one bright spot to Guylain's days and its when he is reading on the train.  You see, Guylain steals the flyaway pages that get trapped in the The Thing and smuggles them home.  His friend, Giuseppe (who used to work at TERN) calls these pages, "live skins" as they are the only survivors of The Thing's massacres.  Guylain loves to read these "live skins" on the train.  He reads them out loud.  He doesn't care that the pages all come from different books and that they don't go together, he just enjoys reading out loud.  So, he does this each morning on the train ride to work.  In fact, his fellow passengers are fans. They enjoy listening to him read to them in the mornings.  One day, two elderly women ask Guylain if he would come to their home and read to them.  He agrees to their request.  The next thing he knows, he's arriving at a nursing home and reading aloud to a group of people.  Guylain is opening his world slowly, one step at a time.  Along this journey he winds up finding a USB key filled with journal entries by a young woman named Julie.  Guylain falls in love with Julie through her journal entries. His only problem - who is Julie?

Talk about an engaging story. I found myself easily caught up in Guylain's life. I laughed at his descriptions of his boss. I cringed when The Thing ate all the books - the horror, the horror! I loved that Guylain read the flyaway pages he smuggled out loud on the train to his fellow passengers on their morning commute. I enjoyed meeting his friends, Yvon and Giuseppe. I giggled when Guylain worried that the elderly folk would find one of the "live skins" to be too scandalous - he never thought about the content on the page, only the act of reading it.  I cheered when his friend Giuseppe gave him a list of possible locations to find Julie. And, I found myself hoping that Julie would fall in love with Guylain if they ever met.  Oh, how I enjoyed this book.  It was charming, funny, and enchanting.  I couldn't help but smiling after I turned the final page.  What a terrific story!

And now I'm off to read Glamorama by Bret Easton Ellis.  Its definitely a change of pace from Didierlaurent's book, but I'm looking forward to it.  Happy reading!!
Posted by A Bookish Way of Life at 7:12 AM
Labels: books, fiction, French literature, Jean-Paul Didierlaurent, Literature, novel, The Reader on the 6.27, translated fiction

This book sounds really interesting and unique. Definitely adding it my TBR and I'll keep a look out for it at the library. Thanks for the recommendation!

Katie, it really is. Hope you enjoy it as much as I did. Happy reading!!

This sounds SO good! Almost like an Antoine Laurain novel. I can't wait to get my hands on a copy. :)

Lark, it really was good. Yes, like Laurain!! Definitely let me know what you think of it :)

I will look for this book to read; the title got my attention and the story sounds great. I like to read about people growing and changing. I hope he finds the girl!

Terra, you will LOVE this book! Its so good! Perfect for Paris in July :)

Quick paced book.. Perfect for the beach! Cute love story about a guy and girl who cross paths in an interesting way!

Beautifully written, full of unexpected surprises, often graphic but sweet overall. Not for everyone because it’s...well...French. I haven’t liked a modern mainstream novel so well since The Book Thief.