GIVEAWAY: The Last Days of Magic: A Novel by Mark Tompkins and a Tarot Card Deck 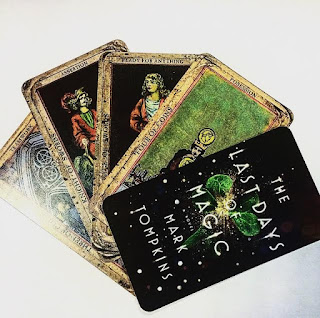 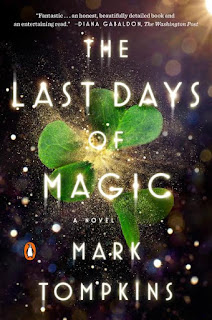 The latest must-read is all about magic, faeries, the Vatican, Ireland, mythology and history - what more could you ask for in a book?!  Check out Mark Tompkins' debut novel,  The Last Days of Magic:


"Spanning the forests and villages of 14th-century Ireland, the lavish courts of France and England, the Vatican’s inner chambers and present-day mysteries, THE LAST DAYS OF MAGIC (Penguin; On sale: March 7, 2017; ISBN: 9780143110019; $16), which is now available in paperback, blends historical, fictional, and mythical events to create a richly imagined world and an exhilarating story of adventure and enchantment. Ireland is the last magical outpost on Earth, its Middle Kingdom—home to faeries and otherworldly beings—still strong in the face of the Vatican’s ever-expanding influence, its armies, exorcists and mercenaries.  But when an ancient treaty between the Celts and faeries is broken, leaving them vulnerable to the machinations of the power-hungry Roman Church, the very existence of magic in the world is threatened.
In Ireland, the reincarnated Morrígna twins are goddesses in human form and the chosen rulers charged with keeping the uneasy peace between the human Celts and Ireland’s faeries, the Sidhe. When one twin is assassinated in an act of defiance by a sect of tree faeries, her sister Aisling, is left weakened and alone, struggling with human desires and a goddess’s destiny.
The Vatican, meanwhile, is plotting the eradication of all magic from Europe takes the opportunity to strike. Jordan is a Vatican commander tapped for the invasion, but he’s plagued with doubts of his own. With budding magical abilities and a growing attachment to the enchantress Najia, he’s torn between desire and duty. As the Celts, Sidhe, and Vatican forces prepare for the battle ahead, Jordan must decide who he stands with—a decision that will have repercussions centuries later, when a graduate student named Sara Hill stumbles unknowingly into the thick of the mystery."

How awesome does that sound? Sounds pretty exciting and fun to me.  I know that I can't wait to get my hands on a copy of The Last Days of Magic - I just know that its going to quite the reading adventure.  And, thanks to the publisher, I get to offer one (1) lucky reader the chance to get lost in Tompkins' world.  Yep, I'm giving away a copy of the book and a deck of tarot cards - how cool is that?!  Just leave me a comment that includes your email address and I'll throw your name in the hate.  This giveaway is open to US residents only.  The last day to enter is 3/24/17 - Good Luck!!
Posted by A Bookish Way of Life at 11:31 AM
Labels: book giveaway, fiction, giveaway, Mark Tompkins, novel, Tarot Card Deck, The Last Days of Magic

oh my gosh!!!
This sounds like pure perfection!
SO jealous that this is US only :( Damn my English address!