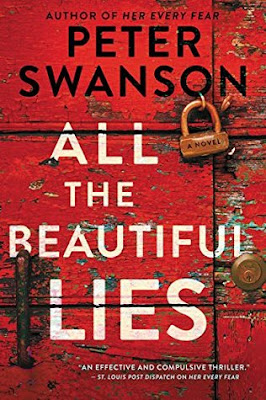 Harry is just about to graduate from college when he gets the news that his father has died.  He goes home for the funeral.  Its just him and his stepmother, Alice.  Harry doesn't really know Alice all that well, so he's a bit wary of her at first.  Alice has secrets that's she's been keeping for ages - some that are just too horrible to even speak of.  As the two spend some together, suspicions are raised and theories are made - was Harry's dad killed, and if so, why?  And, who is Alice?  The more Harry pieces together and the more we learn about Alice - lets just say, the more dicey the situation gets for Harry and anyone around him.  All The Beautiful Lies is a slow-going story that does captivate (at times), but I will be honest and tell you its not Swanson's strongest story.  I've loved his previous books, so I was super excited to read his latest one.  While I did enjoy bits of it, I wasn't completely satisfied.  I felt that the story lacked the excitement, suspense, and mystery that his other books have.  This one was rather flat in comparison.  Overall, it was a decent read. Based on the real-life kidnapping of Sally Horner and her captor (a news story that inspired Nabakov's novel, Lolita), this story provides a look into Sally's perspective and her family members' perspectives on how they struggled to deal with Sally's disappearance.  Its a heart-wrenching story that devastates.  This story grips you from the start as you read about this little girl who wants to befriend a group of girls in her class.  They challenge her to steal something from the local shop in order to join their club.  Sally hides a notebook beneath her sweater and starts walking out the door of the shop, but she gets stopped by a strange man who claims to be from the FBI.  He tells her he knows she's a thief and he must take her to talk to a judge about her crime.  Sally is terrified and looks around for help, but her new friends have fled from the store and left her alone.  The man threatens Sally some more and eventually kidnaps her.  She's scared and confused and doesn't understand why he won't just take her to the police.  Sally doesn't understand that this man is a liar and that he's kidnapped her.  She doesn't understand that he is a criminal who likes little girls.  She has no idea what he has in store for her.  All she knows is that she wants to go home to her mom and her sister.  Rust & Stardust is a terrifying story, because its based on Sally's story.  Its a compelling read that will have you crying, feeling horrified, and leave you bereft once you finish.  I couldn't stop reading, even though I wanted to stop so many times - it was just too hard to read about poor little Sally.  This is a book that will stay with you long after you've turned the last page. 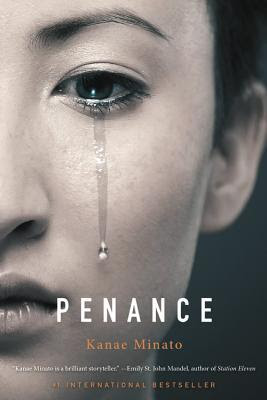 Five little girls are playing volleyball on school grounds when a man dressed in workman's garb walks up to them. He claims to be working and needs some help.  All the little girls volunteer to help him.  He chooses one of them and takes her by the hand.  They walk away together and the rest of the girls continue playing.  Eventually they realize how late its getting, so they set out to look for their friend.  They find her body in the boy's changing room by the swimming pool.  The man is never found and no one is charged with the little girl's murder.  The four little girls are left haunted by their friend's death.  Especially after they visit with her mother a few years later.  The mother blames them for her daughter's death.  She tells them they have three options: find the murderer, pay penance, or do nothing and she will make them pay.  All four girls are terrified and as we read about their lives we find out how they dealt with such a crazy threat.  Its sad, heartbreaking, and unputdownable! I absolutely LOVED this book! Such a great read! 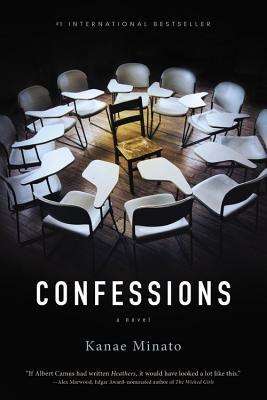 Its the last day of school and the teacher is making announcements.  She will no longer be teaching at the school come the new year.  Yes, her decision has to do with the death of her little girl.  Her daughter's body was found floating in the school pool and it was ruled an accident.  However, the teacher has discovered that two of her students are responsible for her daughter's death.  Yes, her daughter was murdered.  The teacher recounts details she has uncovered and though she doesn't outright name the two murderers, everyone in class knows who she is talking about.  She then confesses to the punishment she has decided to dole out to these two boys.  Lets just say, her confession begins a series of events that are truly unexpected.  Talk about a chilling read. The children in this book are beyond awful and horrifying - they are killers! And the cold, calculating manner in which they plot out their crimes is just terrifying to read about.  I found that I couldn't stop reading. I absolutely loved this story - it was scary, gripping, and unputdownable. Yes, its awful to read about these kids who are monsters, but its also fascinating to learn about their families and how they viewed and handled their sons. And, of course, I wanted the teacher to get her revenge.  I absolutely LOVED this book!  Confessions is a revenge story at its best!

Not a lot of happy reads this time around, but they do sound like compelling stories. Especially Penance and Confessions. I've added them to my Goodreads list. :D

Lark, I know. I didn't even think about it when I chose these books, but they turned out to be a lot darker than I anticipated. The Minaot books were the best. The one about Sally Horner just broke my heart - I had no idea that Lolita was based on a true story! Let me know what you think of the Minato books :)

I gotta get Penance. Can you please stop adding to my reading pile??

I seriously just got Penance from the library. I waste no time.

Ti, you are on the ball and I love it! Let me know what you think of it!!