Elevation: A Novel by Stephen King 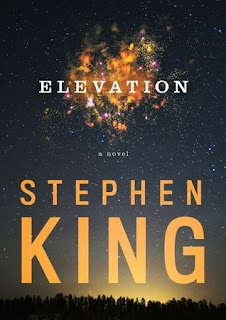 Although Scott Carey doesn’t look any different, he’s been steadily losing weight. There are a couple of other odd things, too. He weighs the same in his clothes and out of them, no matter how heavy they are. Scott doesn’t want to be poked and prodded. He mostly just wants someone else to know, and he trusts Doctor Bob Ellis.

In the small town of Castle Rock, the setting of many of King’s most iconic stories, Scott is engaged in a low grade—but escalating—battle with the lesbians next door whose dog regularly drops his business on Scott’s lawn. One of the women is friendly; the other, cold as ice. Both are trying to launch a new restaurant, but the people of Castle Rock want no part of a gay married couple, and the place is in trouble. When Scott finally understands the prejudices they face–including his own—he tries to help. Unlikely alliances, the annual foot race, and the mystery of Scott’s affliction bring out the best in people who have indulged the worst in themselves and others.

Another classic by King.  Loved reading Elevation this afternoon.  It was short, but emotional.  Or at least I got emotional.

Scott Carey is losing weight.  Only, it doesn't look like he is losing weight.  Say what? Yep, his body is still the same, but the scale is saying different. In fact, the scale keeps reading "weight loss" even when Scott is wearing clothes, carrying keys and coins in his pockets, and holding weights in his hands.  Sounds impossible, right? Well, apparently it is very possible.  Or at least it is possible with Scott.  So, he tells his friend, Dr. Bob.  Confounded by this medical marvel that is his friend, Dr. Bob suggests that Scott go to a hospital.  Scott refuses and swears him to secrecy.  And so, the secret begins.  Dr. Bob calls from time to time and asks about his weight. As Scott goes through this strange weight transformation, his world begins to open.

What a book! I absolutely enjoyed reading all about Scott Carey and his "weight loss".  I wasn't sure what to expect, which I always love when reading King.  His writing is always familiar, smart, and so creative. I found myself easily caught up in the people and town of Castle Rock.  The story was short, but filled with drama, suspense, and emotion.  I'm not sure how I feel about the ending, but I suppose it couldn't have gone any other way.  All in all, another great read by King.

I would happily recommend Elevation to fans of King and anyone looking for their next great read.

It's weird how this one came out of nowhere, Usually I am chomping at the bit to get to a King book but there was hardly any buzz about it. I will read it. I think I maybe have reserved a copy from the library.

I think I'd like to give this one a try.

I have this one on hold at the library. I should get it by 2019. ;) I’m glad to read your thoughts about it, and it sounds fascinating. I’m not sure why, but King’s books seem to intrigue me, even though I have little respect for his general world views.

I might get this one from the library. I do like happy endings and am a bit concerned about this one, all I know about it is your review here.

Ti, I know, right? That's what I thought, too. I gobbled it up - its so short, so its hard not to. Definitely classic King elements in it. A solid read.

Kathy, definitely give it a go. Its not spooky, its more emotional.

M, I love that :) Definitely an interesting read. His books always intrigue me, too. I may not always agree with him, but I do enjoy his writing.

Terra, definitely check it out. Such a good read. The ending was happy in a sense, but I still teared up.