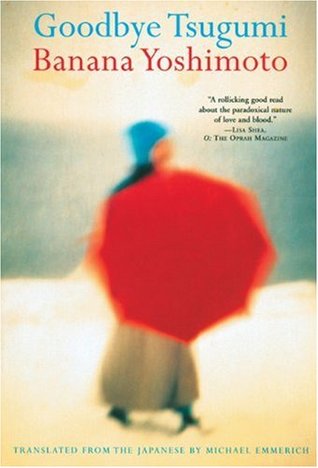 Loved this book to bits! Goodbye Tsugumi is now my FAVORITE story by Yoshimoto. It just really touched my heart and got me thinking about my own family, specifically  my cousins.  Growing up, my aunt from Texas would send her three oldest kids to our house for the summer. And when I say house, it was a duplex that barely fitted us all in it.  Yet, we all managed to squeeze in there and enjoy a summer full of pizza, walks to the park, junk food runs at the local shop, and horror movie binges.  I was a kid, so it was all fun times for me. Looking back, I have so many fond memories of those summers. I think those memories ensured my love for this book - this story just gave me all the feels and I really enjoyed it.

This is the story of Maria and Tsugumi.  Cousins who grew up together.  Maria and her mom lived at the inn that Tsugumi's family owned on the beach.  Her father was married, so Maria and her mom endured year of waiting for him to get divorced.  Eventually, the three of them are able to finally live as a family unit, so they move to Tokyo to be together. Leaving behind the inn is hard for Maria who finds herself missing the beach and looking for smells of the ocean as she traipses around Tokyo.  One day she receives a phone call from Tsugumi telling her that the inn is being sold.  Maria is shocked. She always imagined revisiting the inn again and again.  So, she decides to spend her summer at the inn - one last hurrah before its gone.

As we learn about Maria, we learn about her cousin Tsugumi.  A cousin that she is quite fond of and a bit weary of.  Tsugumi was born sick and the doctors told her parents that she would die young.  Growing up alongside Tsugumi, Maria witnessed firsthand the constant battle with fevers and pains that her cousin endured.  She also witnessed the cruel behavior that Tsugumi became known for.  Being sick and knowing that death could come at any time, Tsugumi was not a nice person.  She was unhappy, therefore she made everyone else unhappy. She would throw out insults, steal your favorite treat, make you cry, and remind you that she was the one dying so you had no reason to complain.  She was the worst. She was also strong, smart, funny, and determined.  Tsugumi lived with her illness daily and yet she would push through it to live her life as best she could.  The two cousins grew close after an incident referred to as the Haunted Mailbox.  From that point on, the two seemed to connect even more so than before.  And now, Maria would be spending another summer at the inn with Tsugumi.

Happy to be back at the place she once called home, Maria quickly settles into life at the inn.  The summer moves along nicely - walks on the beach, seafood galore, and quality time with her family.  The girls meet a boy on the beach - his family is opening a huge hotel on the beach that is driving the locals crazy.  Tsugumi and this boy fall in love.  Life is good.  Maria is happy to see her cousin so content.  Things seem to be moving along swimmingly and then...DRAMA.  Yep, drama comes in the form of a dog-napping, a very deep hole, and a close call with death.  Maria sees Tsugumi in all her colors and gets to know her even more so during that last summer at the inn.  She sees her cousin be ill and endure so much pain.  She sees her cousin battle death.  She sees her cousin's resilience.  And, she finally learns about her cousin's take on life in the form of a letter - Tsugumi thought the end was near so she penned Maria a letter.  Its magical, sad, and just lovely to read all about.  I enjoyed it so much.

Yoshimoto has created a pair of cousins that I couldn't help but fall in love with. Their dynamic was such fun to read about.  She's written a story that not only explores family, but also looks at love, death, and illness. And she writes about it all with such depth and authenticity.  You can taste the sea air and feel the sand between your toes.  You can hear the chatter between cousins as they watch their favorite TV show.  You can feel Tsugumi's hand burning with fever.  You can hear the yapping of the dog as he runs around in circles. And you can see the love between all of these characters as they fight, yell, apologize, and accept one another.  Its truly such a treat to experience.

Goodbye Tsugumi is a quiet and emotional story that will just melt your heart.  It will draw you in and keep you hooked.  I would happily recommend it to everyone. 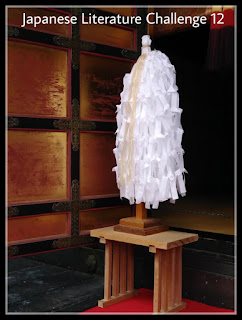 I really want to try this author but I'm afraid I won't understand her work.

Kathy, you will definitely understand this one. Its her most straightforward story - no magical realism elements or anything like that in it. Its definitely a good book - I think you would like it.

This sounds so good. I wish my library had it. They only have three of Yoshimoto's novels. But maybe if I request it, they'll consider purchasing this one, too. fingers crossed!

I love your enthusiasm in this post! (And, reading about your own childhood days.) I, too, am crazy about Banana Yoshimoto's writing, yet while I read this once, I remember Kitchen more clearly. You did a masterful job of reviewing it in this post. xo

M, thank you :) Kitchen was my favorite until I read this one. Thank you for saying that, I really do appreciate it. I'm trying to post more often and write more within each post. Sometimes its easier said than done - some books just speak more than others. xo

I read Goodbye Tsugumi during JlC3 back in 2009. Your very well done post reminded me how this book started me reading all of her work I could.


Goodbye Tsugumi by Banana Yoshimoto started a little slow for me but by the time it was nearing its ending I was wishing it was 1000 pages long so I would not be cut off from the world Banana Yoshimoto created with such economy. I was drawn very deeply into the lives of the lead characters, two female teenage cousins whose lives center around a small town inn outside of Tokyo. The title character Tsugumi is 18, her cousin and narrator of the story Maria is 19 and Yoko the sister of Tsugumi is 20. The parents of Tsugumi own the Inn. Marie's is the only child of a single mother.

Tsugumi has a serious illness and a personality that grates on most people at first. At first I did not like her but
by the time of her action scene that I am sure will amaze all readers I was cheering so much for her. Goodbye Tsugumi contains a lot of themes. It is a story of sibling and family conflict. It is a coming of age story of the two cousins. It is a love story. It is a tale of a revenge so sweet you will howl with delight even as you are shocked by what happens. The novel gives you an intimate look at life in a small town Japanese Inn trying to compete with hotels run by giant corporations. It is a story of the pull of the big city and the shadow it casts.

Both Maria and Tsugumi read a lot. Maria tells us "She was always reading books about all kind of things, she knew a lot".

We are shown how books read long ago can create bonds.

" ''You remember that book Heidi we read when we were kids. I feel kinda like that friend of hers with the bad leg.'
Tsugumi chuckled sheepishly."

It is not labored over in the novel, nothing is, but we can see Maria and her cousin both read a very lot. They read to learn, to pass the time and because they enjoy it. They are raised in a tradition that respects the written word. this reading echos in Maria's observations on nature and in the characters reading of each other.

Nadia, I'm glad you enjoyed this book by Banana Yoshimoto. I enjoyed reading your positive, enthusiastic review. Like Mel, I read it as well, in 2009, for the JLC3.

After some searching (how did you find when you read it, Mel and Suko?! Your records far exceed mine!) I discovered that I read this in 2010. It is a well loved work of Japanese literature, though, to which all four of us can attest.

Bellezza- from my blog post. I find rereading my old posts returns my memory of a work.

I've never read this author. I know, I know.

I adored Kitchen recently, glad to hear that her other books are worth seeking out as well :-)