Death Of An American Beauty: A Novel by Mariah Fredericks

Jane Prescott is taking a break from her duties as lady’s maid for a week, and plans to begin it
with attending the hottest and most scandalous show in town: the opening of an art exhibition,
showcasing the cubists, that is shocking New York City.

1913 is also the fiftieth anniversary of Lincoln’s Emancipation Proclamation speech, and the
city's great and good are determined to celebrate in style. Dolly Rutherford, heiress to the
glamorous Rutherford’s department store empire, has gathered her coterie of society ladies to
put on a play—with Jane’s employer Louise Tyler in the starring role as Lincoln himself. Jane is
torn between helping the ladies with their costumes and enjoying her holiday. But fate decides
she will do neither, when a woman is found murdered outside Jane’s childhood home—a refuge
for women run by her uncle.

Deeply troubled as her uncle falls under suspicion and haunted by memories of a woman she
once knew, Jane—with the help of old friends and new acquaintances, reporter Michael Behan
and music hall pianist Leo Hirschfeld—is determined to discover who is making death into their
own twisted art form.

A historical mystery at its very best! Death Of An American Beauty is Mariah Fredericks' third novel in her Jane Prescott series set in Gilded Age New York.  I've never read any of Fredericks' book, so this book can definitely be read as a standalone novel. And let me just say, after reading and learning about Jane Prescott, I am eager to read more.

Death Of An American Beauty tells the story of Jane Prescott, a lady's maid, who is about to start her vacation.  Her plans include attending an art show - one that has been touted as the hottest ticket in town! Except, Jane's plans get scarpered when a woman gets murdered. A woman from her uncle's refuge for women - he helps prostitutes turn their lives around.  Her uncle becomes a prime suspect, which of course makes Jane set on finding the real killer. Also, her employer is involved with putting on an American Beauty Pageant and Jane isn't sure if she wants to help out.  So, yeah, Jane's life becomes busier than she had originally intended.

Talk about a fun story! Historical fiction, a murder mystery, and a smart, savvy woman bent on saving the day - that is the recipe for an unputdownable read!  I just LOVED getting to know Jane, her family and friends.  As Jane untangles the mystery in search of a killer, we get to read all about New York and its rich history during the early 1900s, which I truly enjoyed. Its always fun to get lost in a bit of history as you try to figure out whodunit. I found Death Of An American Beauty to be a thrilling adventure. I would happily recommend it to fans of Mariah Fredericks and anyone looking for their next great read - you will LOVE this book!! 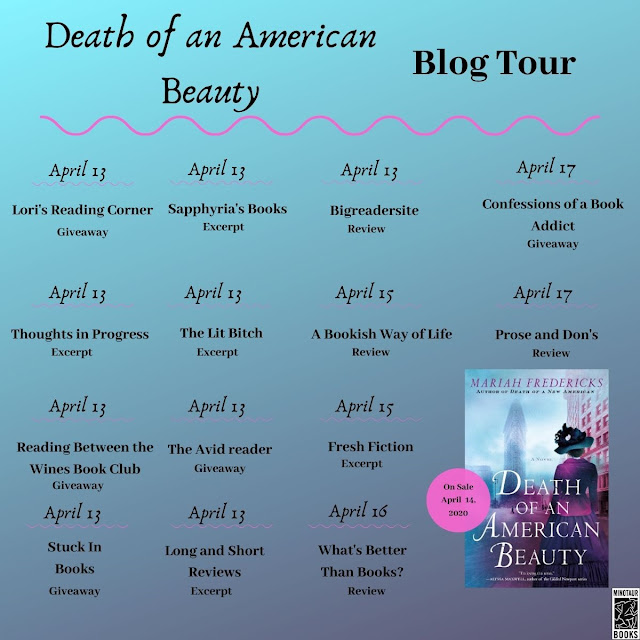 Thank you to the publisher for providing me with a copy of this book!

Posted by A Bookish Way of Life at 3:30 AM
Labels: A Novel, Death Of An American Beauty, fiction, historical fiction, Mariah Fredericks, mystery, novel

How have I missed this series?!