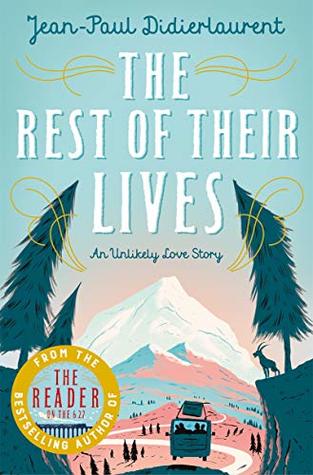 I picked up this gem on the recommendation of an old friend of mine. I thought it would be the perfect book to read for Paris in July.  I started it over the weekend and have been making my way through the story rather slowly. For some reason, I want to savor it and just take my time. It's a slow-going read and I like that. Right now, I want stories that detail characters and the mundane trivialities of life. I'm craving routine, so I'm enjoying reading all about Ambroise and Manelle - he's an embalmer and she's a home help carer. They have yet to meet, but I believe when they do that sparks are going to fly. I'm looking forward to reading some more chapters later on today.

As for Paris in July, I've just started to join in on the fun. I'm reading the above mentioned book and I just finished re-watching the following film: 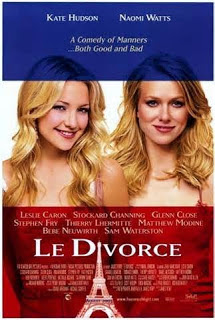 I've seen this film a number of times and I always seem to find myself laughing out loud at this quirky family and all of their farcical drama. Don't get me wrong, there are some serious topics  - suicide, murder, and adultery - yet, somehow the movie is able to move past these issues with aplomb and not weigh you down. So, what exactly is this film about? Well, here goes:

In Le Divorce, we have a film about family, love, a painting, and Paris.  Isabel Walker has traveled to Paris to check in on her older sister, Roxy (who is married and pregnant with her second child).  Eager to embrace French culture, Isabel is excited about the prospects that Paris is sure to bring.  However, once there, she is confronted with a depressed and suicidal sister who has just been dumped by her cheating husband - not exactly a warm welcome.  And, things get even more complicated when her brother-in-law's mistress' husband tries to insinuate himself into her and Roxy's lives by stalking them.  Plus, Isabel has found a new job, a sort-of boyfriend, and a married man to keep her occupied.  Oh, and the painting of St. Ursula that hangs in Roxy's home may or may not be a real La Tour - which brings the whole Walker clan out to Paris (plus, they're all worried after Roxy's attempted suicide).   All the while, Roxy is dealing with her husband's meddlesome family about a divorce that she is adamantly against.  Sounds pretty crazy and kind of ridiculous, right?  Well it is, and its not.  Thanks in large part to the stellar cast of actors in the film, this movie is a surprisingly sweet treat to watch.  Oh, and of course, it helps to have Paris be the backdrop amidst all the drama.  The Eiffel Tower, those ubiquitous scarves,  a red Hermes handbag, delectable dishes, chic apartments, and country estates - what more could I want?

Definitely check it out if you get a chance. Its fun, engaging, and such a treat to watch.


And now, I'm off to read some more of The Rest Of Their Lives. Hope you are enjoying Paris in July.

The Rest of Their Lives looks sweet! I love that cover. I've not heard of it before but what you said about routine really appeals to me. Those day in the life type stories are so valuable right now. Anyone's day but my own. LOL.

I am reading The Second Home right now. It's not what I imagined it to be but that's not necessarily a bad thing. Have to finish it before I decide.

This is a delightful film. And the book sounds fun and just the right summer tonic, too. Thanks for sharing them.

I enjoyed reading The Reader on the 6.27 very much. I will look for The Rest Of Their Lives.

And it just so happens that we are watching Le Divorce tonight!

Wow, sounds like a roller-coaster-ride! Will look for it.