The Storyteller: A Novel by Jodi Picoult 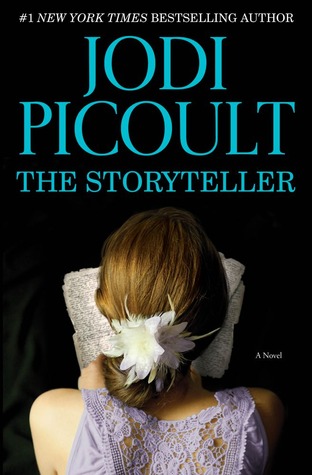 Sage Singer is a baker.  She works through the night, preparing the day's breads and pastries, trying to escape a reality of loneliness, bad memories, and the shadow of her mother's death.  When Josef Weber, an elderly man in Sage's grief support group, begins stopping by the bakery, they strike up an unlikely friendship.  Despite their differences, they see in each other the hidden scars that others can't see, and they become companions.

Everything changes on the day that Josef confesses a long-buried secret - one that nobody else in town would ever suspect - and asks Sage for an extraordinary favor.  If she says yes, she faces not only moral repercussions, but potentially legal ones as well.  With her own identity suddenly challenged, and the integrity of the closest friend she's ever had clouded, Sage begins to question the assumptions and expectations she's made about her life and her family.  When does a moral choice become a moral imperative?  And where does one draw the line between punishment and justice, forgiveness and mercy?

In this searingly honest novel, Jodi Picoult gracefully explores the lengths we will go in order to protect our families and to keep the past from dictating the future.

Interesting premise, fascinating storytelling, and unforgettable characters.  All in all, The Storyteller by Jodi Picoult proved to be a great read.

Sage is a young woman who has a scar on her face that makes her feel immensely insecure - so much so, that she works as a baker (hidden in the kitchen baking all night long) and is having an affair with a married man (the funeral director from her mother's funeral).  This is a woman who does not believe she deserves good things to happen to her.  She is filled with so much guilt regarding her mother's death that she continues to attend a grief support group (three years after her mother's passing.)  Life for Sage is stunted and filled with loneliness.  However, everything changes the day she befriends Josef Weber.

A recent addition to Sage's grief support group, Weber keeps to himself.  He's an elderly man who frequently visits the bakery Sage works at.  He usually brings his little dog and spends his time writing in a small black notebook.  According to the people in town, Weber is as nice as they come - he was a German teacher at the local high school, a former little league coach, and a real asset to the community.  Except that he really isn't that nice of a man.  In fact, he is the complete opposite of nice - he is cruel beyond belief.  How do we find this out?  Well, one day Josef decides to spill the beans about his past to Sage. And let me just say that his secret is HUGE and one that will completely change Sage forever.

Picoult explores the questions of morality, history, family, friendship and so much more with her book The Storyteller.  She writes a captivating story that is filled with such vividness and authenticity, that you can't help but feel shattered after reading some of the passages in this book.  As for the story that she includes within her story - the one written by Minka (Sage's grandmother) - it is clearly an allegory for the brutal and ugly reality happening to and around Minka.  I have to admit to really enjoying Minka's story - it was so graphic and bloody, but also emotionally compelling.   This novel yanked at my heart strings and pulled me in deep.  I found that I could only read bits of the book at times, because it was just too much to take in (my heart kept breaking).  This is one book that I won't soon forget.

I would definitely recommend The Storyteller to fans of Picoult's works and fans of fiction (specifically, books that deal with WWII).  You will LOVE this book!!!
Posted by A Bookish Way of Life at 10:10 AM
Labels: fiction, Jodi Picoult, novel, The Storyteller, women's fiction.

Here books always leave me with plenty to think about, but her writing doesn't always work for me. At times, it doesn't seem to flow well. Any hint of that here?

Ti, I know what you mean. I hadn't read a Picoult book in a long time, because the last one left me bored. This time round I got sucked in so easily. The writing was great, but there were times that I found the direction of the story to be out of sync with itself. So, be forewarned :)