Here are some of the new and exciting books that I've recently received in the post: 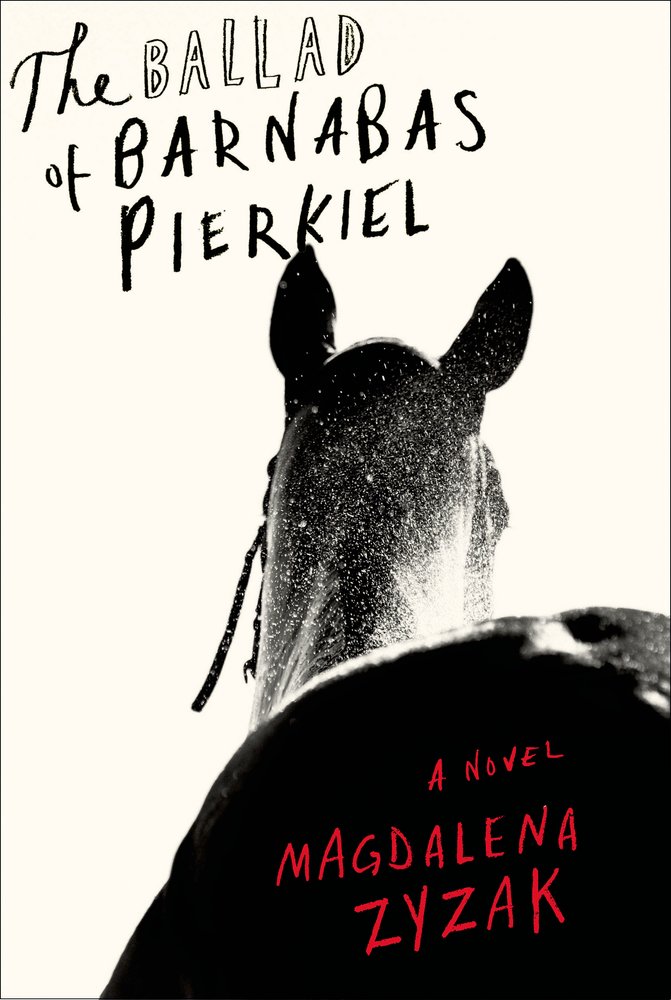 about book:  A story of love and adventure in an imaginary Slavic nation on the brink of historic change—The Ballad of Barnabas Pierkiel is the debut of a ribald and raucous new literary voice. English is Magdalena Zyzak’s second language (Polish being her first) and so she approaches the language in a unique way. Her writing is fresh, inventive, playful. The novel’s plot is as equally intriguing. The Ballad of Barnabas Pierkiel follows the exploits of a young swineherd with romantic delusions of grandeur. Desperate to attract the voluptuous Roosha, the Gypsy concubine of the local boot-and-shoe magnate, Barnabas and his short-legged steed Wilhelm get embroiled in a series of scandals and misadventures, as every attempt at wooing ends in catastrophe. After the mysterious death of an important figure in the community, a witch-hunt ensues, and a stranger falls from the sky. Barnabas begins to see the terrible tide of history turning in his beloved hometown.

PRAISE FOR THE BALLAD OF BARNABAS PIERKIEL:
"Make way for Magdalena Zyzak! She writes in a way uniquely her own and approaches the English language with the joy and reverence of her countryman Joseph Conrad. The Ballad of Barnabas Pierkiel is a heady drink."
–Gary Shteyngart, author of Super Sad True Love Story 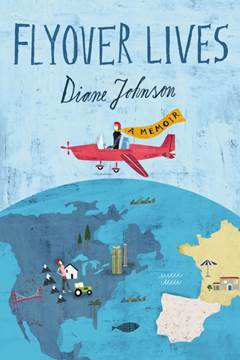 about book:  Growing up in the small river town of Moline, Illinois, part of the Midwest region sometimes called “the flyover,” Diane Johnson dreamed of escape—and escape she did. Now having lived part-time in Paris for many years and having traveled widely, she is stung, while on an idyllic weekend holiday in the South of France, by a French friend’s taunt: “You Americans don’t know where you’re from, and you don’t care.”

This j’accuse comment haunts Diane. Were Americans really indifferent to their history? Her family seemed to have settled in the Midwest generations ago—and though no one discussed the past, surely her people came from somewhere? She begins to dig into her family’s past, delving into letters and memoirs written by her family’s early American settlers. As she learns more about her adventurous ancestors, she reflects on the westward journeys shared by so many American families, while regaling readers with the ring-so-true details of small-town life—her parents’ “Updated Cape Cod” house built from mail-order blueprints; Friday night football; bridge games; golf lessons; lutefisk at Christmas.
Ultimately, Diane’s historical quest takes her back to a forebear who fled France, bringing her memoir full circle to her life in France now, and providing a moving exploration of place, its magnetic pull on us, and our lust for escape. With the acuity and sympathy that Johnson’s bestselling novels are known for, Flyover Lives captures the magnetic pull of home against our lust for self-invention.

PRAISE FOR DIANE JOHNSON:
"Le Divorce is thick with frank observation — about sex, manners, food, money — of the kind that illuminates all of her work, and it lifts the novel high above those of most other mid-career American writers. A critic at heart, Johnson scorns flowery prose and aching 'sensitivity,' preferring to get her hands dirty poking around in the human condition. She's a treat to read."—Dwight Garner, Slate

"Like Jane Austen, Johnson delights in the worldly rituals surrounding courtship and marriage...she is a philosopher as much as a novelist." —The New Yorker

"Immensely amusing, L'Affaire has the same mischievous wit and graceful style as Johnson's earlier Parisian works, but it is broader in cultural scope, . . . more ambitious in its narrative form and decidedly forward-looking."—Caryn James, The New York Times Book Review 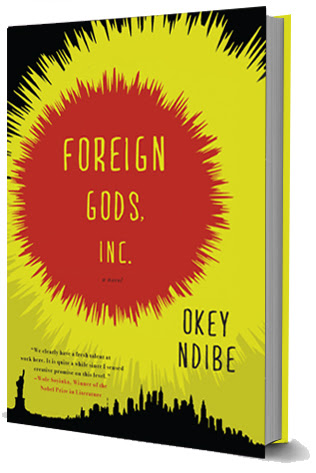 about book:  Foreign Gods, Inc.  tells the story of Ike, a highly educated Nigerian barely making a living driving a cab in New York City.  A bad marriage and his addiction to gambling and alcohol - not to mention financial demands from family in Nigeria - have pushed him into crisis.  After learning about a high-end Manhattan art dealer specializing in the sale of "foreign gods," Ike hatches a desperate plan involving the theft of his old village's chief god.  But in Nigeria, complications arise: political corruption, family conflicts, and rising tensions between Christians and followers of Ngene, the war god he has returned to steal.

A meditation on the dreams, promises, and frustrations of the immigrant life in America; the nature and impact of religious conflicts; and examination of the ways in which modern culture creates or heightens infatuation with the "exotic," including the desire to own strange objects and hanker after ineffable illusions; and an exploration of the shifting nature of memory, Foreign Gods, Inc. brilliantly illuminates our globally interconnected world.

"Like the love child of Chinua Achebe and Victor LaValle."
—Tayari Jones, author of Silver Sparrow
“Foreign Gods, Inc. reads like the narrative of a taxi-driving Faust


in modern Nigeria and America. With Moliere-like humorous debunking of religious hypocrisy and rancid materialism, it teems with characters and situations that make you laugh in order not to cry.”
—Ngũgĩ wa Thiong’o, author of Wizard of the Crow 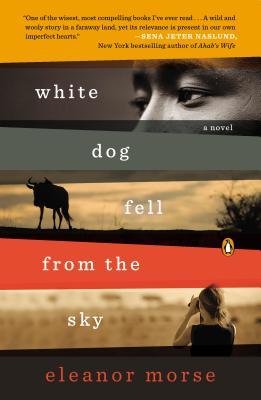 about book:  Botswana, 1977.  Isaac Muthethe thinks he is dead.  After the young medical student witnesses a murder by white members of the South African Defense Force, he is smuggled across the border from South Africa in a hearse.  He awakens covered in dust, staring at the blue sky and at the face of White Dog.  Far from dead, he finds himself, for the first time, in a country without apartheid.

Isaac finds work with Alice Mendelssohn, a young married American living in Botswana, who hires him as a gardener.  A year later, her marriage an empty shell, Alice sets off on a work-related trip, leaving her home in the care of Isaac and White Dog.  But when Isaac goes missing Alice sets out to search for him.  What she finds will changer her life and inextricably bind her to this beautiful, sunburned land.


PRAISE FOR WHITE DOG FELL FROM THE SKY:


White Dog Fell From the Sky catches the soul of compassion. It is one of the wisest, most comprehensive, most compelling books I've ever read. Neither human nor beast is treated sentimentally, but the capacity to care is celebrated here in a way that is politically and personally cogent.  It's a wild and wooly story in a far away land, yet its relevance is present in our own imperfect hearts: who and how to love and when and why to stop. Here's the real thing, a book of genuine intellect and inspiration, superbly written, fascinating."- Sena Jeter Naslund, New York Times bestselling author of Ahab's Wife, Abundance and Adam & Eve

“Magic, friendship, the tragedy of apartheid and the triumph of loyalty are recounted in poetic, powerful prose by this unconventional and intelligent writer. Shattering and uplifting.”—Kuki Gallmann, author of I Dreamed of Africa

“Eleanor Morse captures the magic of the African landscape and the terror and degradation of life under apartheid…[She] channels her fascination with the factious regions into her courageous characters, whose story roars along and arrives, finally, at hope.”—O, The Oprah Magazine


They sound amazing, don't they?  I'm pretty excited to fall in deep with these tomes.  Of course, now I have to choose which one to read first...hmm...choices, choices.

Thank you to the publishers for providing me with copies of these books!

Posted by A Bookish Way of Life at 7:59 AM
Labels: Flyover Lives, Foreign Gods, Inc., The Ballad of Barnabas Pierkiel, White Dog Fell From the Sky

I have White Dog Fell From the Sky, but I haven't yet read it. Not sure when I will somehow the very heavy topics are too heavy for me right now. I think I need a mystery, or a comedy, or something romantic to get me through some tense days at school. Glad you have such nice reads, though, and looking forward to your excellent thoughts. xo

These are all new to me. I hope you enjoy them.

I really need to pull White Dog Fell From The Sky off the book shelf soon. I'm hearing such great things about it.

Bellezza, thanks! I look forward to yours as well :)