I watched Rob Lowe's interview on Oprah a few weeks ago, because it was on TV and I was bored.  As a result, I realize that I actually do like Lowe and wanted to read his books.  So, I downloaded Stories I Only Tell My Friends and Love Life.  Here's what I thought: 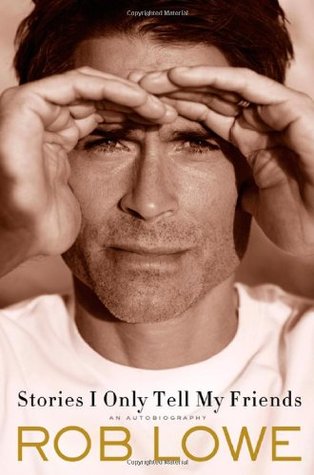 In Stories, we learn about Lowe's life growing up as a child of divorce, his interest in acting, his first big movie role ( The Outsiders), his alcoholism, meeting his wife, and the acting roles and people who shaped him to be the person he is today.  His writing is candid, engaging, and rather amusing at times.  I found myself reading this book with Lowe's voice in my  head, which I loved.  I have to admit that though I've always found Lowe to be attractive and have enjoyed his work (The West Wing - love Sam Seaborn; Parks and Recreation - Chris Traeger), I have never really followed his career (or seen that much of his work).  So, I loved learning about the ups and downs of a career in Hollywood.  The laborious auditions (Coppola sounds crazy!), the bad reviews, the office politics (think West Wing snubbing), and the thrill of finding a role of a lifetime.  Lowe writes about his life with such ease and clarity that imagining the steps and stumbles he's taken along the way is captivating.  I truly enjoyed getting to know this actor in all his glory - both personally and professionally.  In fact, I've just started re-watching The West Wing on DVD and have started crushing on Sam Seaborn all over again. 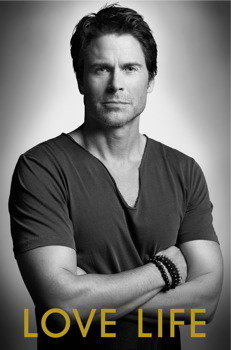 In Love Life, Lowe does explore his career once again, but this time round he touches on more personal stories involving his wife, children, friendships, love, sex, and rehab.  This book is definitely different from his previous one - the tone is more confident, the subject matter is more in depth, and the writing is much more poignant and humorous.  Lowe has definitely found his voice - Stories showed it in spades, but Love Life shouts it out from the rooftops.  I found myself even more intrigued by what this man had to share with us.  We learn about his time at rehab and what lessons he took from there - Remember Buck.  We learn about his role as a parent and the pride he takes in being a father - chaperoning field trips, coaching his sons in sports, dropping his eldest son off at college, and marveling at the two boys he's helped create.  We learn about his diehard love for his wife and the passion they have for their family and one another.  And, we learn about Lowe's decision to move forward in his career by pushing boundaries - taking on roles that stretched his acting chops and shielded his good looks (Drew Peterson Lifetime Movie - Untouchable;  Behind the Candelabra - Liberace's plastic surgeon).   His book, Love Life, shows us once again what a talented individual he truly is.

I would definitely recommend both books, Stories I Only Tell My Friends and Love Life, to fans of Rob Lowe and fans of autobiographies.  You will LOVE these books!!  And, you will want to watch Rob Lowe movies and TV shows as a result - I'm going to watch St. Elmo's Fire later this week!
Posted by A Bookish Way of Life at 11:27 AM
Labels: autobiography, Love Life, nonfiction, Rob Lowe, Stories I Only Tell My Friends

A friend gave me his first book but I haven't read it yet. I read You Couldn't Ignore Me If You Tried and it touched on the alcoholism of several of the brat pack members we know and love, so I knew he had a problem with it as well.

I heard that this second book was more in depth. I am happy to hear that. I loved Andrew McCarthy's book but felt that he didn't go deep enough or wasn't read to do so.

Ti, I think you'll really like either of his books. Lowe is a great writer and his candidness is eye-opening.

We loved him in west wing, and I had very fond teenage memories of the outsiders... I didn't think he'd be an author tho. You've opened my eyes here. Thanks. I've also popped in to let you know Paris in July is coming up - so we'd love to see you if you'd like to join us this year.

Tamara, he was AMAZING on west wing :) And, thank you for reminding me of Paris in July (I've been looking forward to it!!!). I'm definitely up for joining you all in all things Paris come July :)