GIVEAWAY & REVIEW: The Secret of Pembrooke Park by Julie Klassen

Abigail Foster is the practical daughter.  She fears she will end up a spinster, especially as she has little dowry, and the one man she thought might marry her seems to have fallen for her younger, prettier sister.

Facing financial ruin, Abigail and her father search for more affordable lodgings, until a strange solicitor arrives with an outstanding offer: the use of a distant manor house abandoned  for eighteen years.  The Fosters journey to imposing Pembrooke Park and are startled to find it entombed as it was abruptly left: tea cups encrusted with dry tea, moth-eaten clothes in wardrobes, a doll's house left mid-play...

The handsome local curate welcomes them, but though he and his family seem acquainted with the manor's past, the only information they offer is a stern warning: Beware trespassers drawn by rumors that Pembrooke Park contains a secret room filled with treasure.

This catches Abigail's attention.  Hoping to restore her family's finances - and her dowry - Abigail looks for this supposed treasure.  But eerie sounds at night and footprints in the dust reveal she isn't the only one secretly searching the house.

Then Abigail begins receiving anonymous letters, containing clues about the hidden room and startling discoveries about the past.

Pembrooke Park is the place to be!  If you want mystery, suspense, and romance all rolled up into one fantastic story, then you need to read The Secret of Pembrooke Park by Julie Klassen.  This is one Gothic Regency romance you won't want to miss!

Abigail Foster believes that she is to blame for her family's recent financial ruin.  She urged her father to invest in her uncle's bank and now they are in the poorhouse.  Well, poor in the sense that her sister will still be able to enjoy the season (husband hunting society style) and they will have to downsize their staff to only five.  Of course, house hunting on a budget is not easy, so when they are introduced to a solicitor who is keen on providing them with accommodation they are bit skeptical.  Turns out Abby's father's distant relative has a manor that they would like the Fosters to let for twelvemonth at a pittance of price.  Insecure about her financial savvy after her last epic fail, Abby feels she must prove herself once again to her father.  She decides that this too-good-to-true offer is a must and urges her father to agree to it.  She even sacrifices her dowry so that her sister can buy new dresses for the season.  Abby just wants the best for her family and believes that Pembrooke Park is the answer.  So, she heads to their new digs to get it all in order for her family's arrival.  The house has been abandoned for nearly twenty years, so it is in quite a state.  Under Abby's management, the staff brings the house up to snuff and soon she is enjoying walks around the estate, meeting her neighbors, and developing a new crush.  Life is looking up for the Fosters.

Except, Abby's heart still beats for her childhood friend, Gilbert.  Only he's been making the rounds with her sister during the season, so he is no longer an option.  And then there is the biggest problem of all - the rumors swirling around Pembrooke Park.  Seems that it houses a hidden treasure so valuable, people are willing to lie, cheat, steal and even die for it.  Abby asks her neighbors and staff about the house's and Pembrooke family's history, but no one will tell her anything.  They are all afraid to talk about the past.  As for Abby, she is lonely in that big house.  It makes too many unusual noises late at night.  She finds footsteps in dusty hallways and doors left ajar (when they should have been shut).  And she keeps receiving old journal entries in the mail with notes attached from someone purporting to be a Pembrooke relative.  There are so many unsettling events, that Abby is eager for her father to arrive at the house.  Unfortunately, his arrival also brings an unexpected guest - someone Abby was warned to keep out of Pembrooke Park.  Talk about drama!! And I haven't even mentioned Abby's crush - Will Chapman.  He's the local curate who lives right next door to Abby and she is rather keen on him.  The only problem is that she's not so sure how he feels about her.  Then again as the story progresses, Abby finds herself admired by more than one suitor.  Hmm...looks like Pembrooke Park just might be the ticket after all.  If only, the house would quiet down, along with all those unseemly rumors.

And that is all I shall write about this wonderful book.  If you want to find out what the mystery is surrounding Pembrooke Park and whether or not Abby winds up married, then you must pick up a copy of The Secret of Pembrooke Park and read it ASAP!  You will love getting lost in Julie Klassen's words and world!  In fact check out the details below regarding Klassen's amazing giveaway!!  You may just be lucky enough to win a copy of this book.  Good luck!!

WIN ONE OF FOUR FABULOUS PRIZES 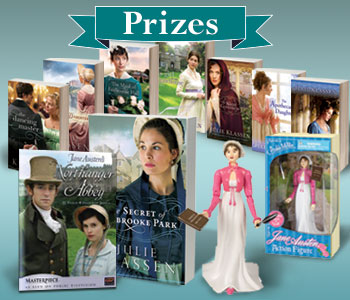 In celebration of the release of The Secret of Pembrooke Park, four chances to win copies of Julie's books and other Jane Austen-inspired items are being offered.

Three lucky winners will receive one trade paperback or eBook copy of The Secret of Pembrooke Park, and one grand prize winner will receive one copy of all eight of Julie's novels: Lady of Milkweed Manor, The Apothecary's Daughter, The Silent Governess, The Girl in the Gatehouse, The Maid of Fairbourne Hall, The Tutor's Daughter, The Dancing Master, and The Secret of Pembrooke Park, one DVD of Northanger Abbey (2007) and a Jane Austen Action figure.

To enter the giveaway contest, simply leave a comment on any or all of the blog stops on The Secret of Pembrooke Park Blog Tour starting February 16, 2015 through 11:59 pm PT, March 9, 2015.  Winners will be drawn at random from all of the comments and announced on Julie Klassen's website on March 16, 2015.  Winners will have until March 22, 2015 to claim their prize.  The giveaway contest is open to residents of the US, UK, and Canada.  Digital books will be sent through Amazon or Barnes & Noble.  Good luck to all!

What a great book with a beautiful cover. You always have such gorgeous book covers. How do you do that?!

atransparentmom, thanks! It was a great book and the cover was fantastic! I love beautiful book covers - I'm kind of a snob about it (LOL!)

How fun - the books look amazing!

I love the cover as well. And the book was just as enjoyable!

Great review. I am looking forward to reading THE SECRET OF PEMBROOKE PARK. The cover is lovely.

I'm so glad you liked the book. I have read other Julie Klassen books and loved them, too!

I have only read two Julie Klassen thus and this is my favorite of the two! :) I LOVED the characters, the mystery, and they intrigue! Not to mention the twists!!!!! I can't wait to read more from her!

I absolutely LOVED The Secret of Pembrooke Park and I'm looking forward to reading her earlier books now!

I'm so excited for this book!!!

This looks like a great book and would make a great addition to our church library shelves. librarybooks at religious dot com

Thanks so much for the great review! I appreciate it.

Enjoyed your review! Julie is such a great author! :)

Very awesome! Looking forward to reading this one.

Thank you for the review! I loved this book as well and am looking forward to reading others!

This book was such a great read!

It's hard to review this book withoug giving away spoilers. You did a great job! :)

I loved The Secret of Pembrooke Park, and I can not wait until the next book from Julie Klassen!

I’m so excited about the blog tour! Julie Klassen is one of my all-time favorites!

This is a great review. I just know I will love The Secret of Pembrooke Park. This book has a terrific trailer too that is a fun glimpse into the book.

Thanks for sharing your thoughts! Looking forward to reading this and more to come!

I would love to read this book!

Wow! Thank you all for leaving comments. This book was such a fun read that I know you would all enjoy, so GOOD LUCK to you all in the giveaway. My fingers are crossed!!

Great review! It is such a great book. I loved the mystery of the house and trying to figure out what happened.
~Amanda

What a lovely blog and review! Thank you for sharing with us!! I'd have to agree with the rest of you all. The cover is simply beautiful! ~ Blessings, Juli emeraldelena@hotmail.com

Enjoyed the review. Thanks for being part of the book tour.

Awesome book! I agree with a previous commenter that the cover is beautiful!

I'm a huge fan of Julie Klassen so this blog tour has been a lot of fun! some great reviews & meeting new people through their blogs. Would love to win this prize package...thank you for the chance!

I want to find out the mystery! Yes! I love the cover also.

Cannot wait to find out the secret and the ending of this novel.

lol - you do a great job describing the story. I'm looking forward to reading it!

Oh I love all her books!! Can't wait to read this one!
Dezi A
sethdezAThotmailDOTcom

I love Julie Klassen she is a wonderful author!

Can't wait to read this!

I love Julie's books and really want to read this latest one too :)

thanks for sharing your thoughts about julie's book love reading her books. and I love this cover.

I love Julie Klassen's books and look forward to reading this one! :)

Hey! I see Nadia laughed at me!! ha ha ha (: There's nothing wrong with being a beautiful book cover snob (;

Always a fan of Julie's books - can't wait to read it! truckredford(at)gmail(dot)com

Great review. I have enjoyed a few of Julie's books and look forward to reading this newest one.

Can't wait to read this!

Thanks for the lovely review! Your responses are appreciated <3