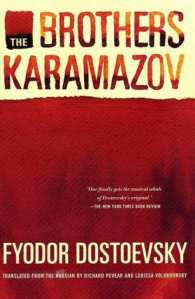 I'm done! TBK has been conquered! Yay!! As far as this last part is concerned - why, Dostoevsky, why? How could you build up the speed of the book with such gusto in part 3 and then let the final part just lay flat? I must say I'm disappointed. I was expecting something that would just make that final part POP, but alas, there was no POP, just a poof.  Reminds me of that Eliot poem, The Hollow Men, when he wrote,  "not with a bang, but with a whimper". That is exactly how TBK ended.

Alright, so we have Ilyusha on his deathbed (his illness has progressed), Koyla (who all the schoolboys look up to and who Ilyusha had a falling out with) and Alyosha (who meets Koyla and influences him to the point that Koyla is beginning to rethink his atheist and socialist beliefs).  From here we move on to Ivan and his descent into madness, followed by Dmitri's trial where Katerina's testimony pretty much seals his fate (she introduces a letter that was written by Dmitri and that basically says he would kill his father).  The verdict is guilty ( twenty years of hard labor in Siberia).  We end with Katerina visiting Dmitri and both of them telling each other they will promise to love each other forever.  And we have Alyosha attending Ilyusha's funeral, where he tells the schoolboys in attendance to always keep Ilyusha in their hearts and to love each other - which all the boys promise to do. "Hurrah for Karamazov" the boys chant! The end.

The end indeed. Truthfully, I could not wait to finish this book and was happy to turn the last page. Don't get me wrong, I enjoyed reading about these maddening characters and I thought Doestoevsky's writing was definitely great, but there were just times when I felt he went on and on and on and on.  Overall, this was not one of my favorite reads and I'm not sure when I'll be reading more of his work in the future. However, I am really glad that I joined in on Bellezza's read along of this behemoth of a book, because it inspired me to pick up a book by a Russian author that I had been rather intimidated by.  Thanks, Bellezza!! And now I'm off to continue reading a frivolous book titled, The Lost Symbol.
Posted by A Bookish Way of Life at 11:24 PM
Labels: dostoevksy, read along, TBK

I'm inclined to agree with you - I never got on with TBK, but loved Crime and Punishment. You obviously feel rather let down! All that slog and little reward at the end.

It's not as much a thrill ride as C&P; but I do like the whole idea of the grand inquisitors. It's a rather complicated work in terms to tying the bundle. :)

I would read a frivolous light book after a chunkster like this!

Think that I wrote something to the effect of how odd it is to absolutely love so many small parts of the novel but not the whole. So complicated. I liked it. Not loved it. In the fourth part, the novel ground to a halt for me with the court scenes. Again, appreciate his touch, the satire but found it to be so ill placed in the novel. Like with the sections we previously discussed in part two. Pacing killers.

Great reading along with you though!

I'm so glad you joined in the read along. I was frustrated at the end, not because of the length, or Dostoevsky's tendency to go on and on ;) but because it was a let down to the build up of Part 3. Also, I really hate to be left up in the air...and I felt I was to some degree as to who committed the murder. I feel safe to say it was Smerdyakov, now, but having always heard it was the brothers, I was a bit taken aback. It shows how one must read the classics for oneself, and it is with a sigh of relief that we can check this off our list. Personally, I prefer Tolstoy.

and I'm interested in your thoughts on The Last Symbol. Dan Brown's books all seem to blend into one big sameness to me, and I like the compelling propulsion between chapters, but what really bothers me is how he wants to make claims as to Christianity but gets it all wrong. Not once has he quoted correctly from the Bible. Just my thoughts...

I am also opting for lighter reading material after this one! I need about a week and then I'll resume Little Dorrit. I just can't make myself yet!

How frustrating to read for so long and take on such a challenge only to be disappointed by the ending!

Hrm, this is interesting! I've never thought about reading this one. I've read Crime and Punishment and adored it and I'm thinking of reading Notes, but it's sad that this fell flat for you!

Nadia, I just pulled the winner for Crossing by Andrew Xia Fukuda, and you're it! So, if you'd email me your address (bellezza.mjs@gmail.com) I'll tell the publisher so we can get your copy mailed. Congratulations!

Thanks for your comments everyone! I'm glad I wasn't the only one who felt underwhelmed about this book considering its reputation as being a masterpiece. And I did notice a certain title bandied about that I'm thinking I should consider reading later on this year (after I've had some time apart from Dostoevsky). Crime and Punishment. Hmmm. Might just add to my TBR list.