Today's number was 26. The book: Eating People is Wrong by Malcolm Bradbury. 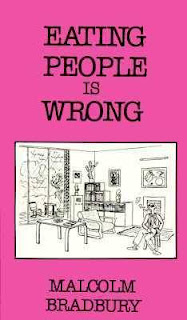 I read this book a number of years ago. I found it on the shelf at an Oxfam bookstore in Lancaster and thought that it sounded rather interesting and so I bought it on a whim. I'd never heard of Malcolm Bradbury and so I had no idea what to expect. Well, lo and behold, this was his debut novel that I had picked up and let me tell you what a treat it was to read.

Stuart Treece is an English college professor at a provincial British university.  He is a liberal minded humanist who is discovering that his ideas are no longer fitting in with the times and is struggling with figuring out a way to make them fit.  We follow Stuart as he navigates the twists and turns of life during the academic school year.  He deals with his students on all different levels: academic, romantic, and rivalrous.  Oh, and he is a bit of  counselor to the student who keeps locking himself in the bathrooms all over campus.  Plus, there are the academic/social functions which he throws together: a tea for the undergrads and a sherry party at his house for the postgrads - both are complete failures.   And there is that pesky driving test which he just can't seem to pass.  All in all, not quite the year that Treece had hoped for.

This book by Bradbury was such a great read, that I still find myself chuckling at the thought of Treece and his bungled efforts to romance his postgraduate student, Emma.  As far as describing this book, I would have to say that it's a satirical take on campus life - its both amusing and witty.  The writing is strong and the cast of characters are easy to sympathize with and laugh at.  Overall, one of my favorite reads during my time in grad school.  I even went out and bought the rest of Bradbury's works, because I enjoyed Eating People is Wrong so much.  I would definitely recommend this book to anyone who likes to read farcical accounts of life in academia. Oh, and I do believe that the title refers to a song (which unfortunately I do not remember - sorry).

The title and cover would be just the kind of thing that would jump off the shelve at you--always fun to be rewarded with a great book when that happens.

Lisa, that is so true! I have to admit that it was the title that got me. Plus, the idea of having to explain what the book was about, which was not eating people, was fun. :)

I am looking forward to your review of the latest Dan Brown.

Sounds like a wonderful book! I think I would enjoy it since we spent 8 years in a college town.

This book sounds awesome! I think I could probably really relate to it right now. :)

Speaking of Lost Symbol (or not of it, but other books in your To Read column to the left, here)... the cover of Guest House is calling my name! I wonder what it's about. Off to find out!

I'm inviting you to this new Book Reviews blog. You should consider joining our blog as a reviewer.

Book Reviews is a forum for all of us who believe that books can change us for the better. You can write about any book that you enjoyed reading and motivate people around you to read it. By this, we can help spread the joyous habit of reading, in our own little way.

You can repost all your book reviews at Book Reviews, both old and new!

If your excited by this, drop me a mail at bookreviews@bookrack.in and i'll send you an invite

found this one at Oxfam? Makes it all the more intriguing, I'd say. I do love those books about academics/academia.

If you get a minutes, come on over ahd check out the book giveaway I'm doing. After buying such a treasure load of books unbelievingly discounted at a book fair, I have some to share and in fact think I'd better throw a few more into the giveaway!
Cheers!

This book sounds like fun!! I'm sure I would also pick it up if I saw it on a bookstand. LOL