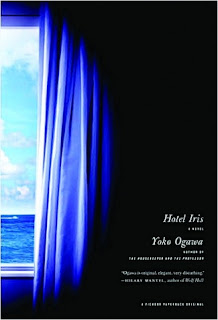 In a crumbling seaside hotel on the coast of Japan, quiet seventeen-year-old Mari works the front desk as her mother tends to the off-season customers.  When one night they are forced to expel a middle-aged man and a prostitute from their room, Mari finds herself drawn to the man's voice, in what will become the first gesture of a single long seduction.  In spite of her provincial surroundings, and her cool but controlling mother, Mari is a sophisticated observer of human desire, and she sees in this man something she has long been looking for.

The man is a proud if threadbare translator living on an island off the coast.  A widower, there are whispers around town that he may have murdered his wife.  Mari begins to visit him on his island, and he soon initiates her into a dark realm of both pain and pleasure, a place in which she finds herself more at ease even than the translator.  As Mari's mother begins to close in on the affair, Mari's sense of what is suitable and what is desirable are recklessly engaged.

Wow. Ogawa has written another haunting novel.  I'm not sure what to write about this book, because truthfully there were times that I was rather shocked at the deplorable and violent manner in which Mari was treated by her companion, the translator.  Her first foray into an intimate relationship consisted of being tied up, hung by the ceiling, photographed, physically and verbally abused - all of which Mari craved and enjoyed.  So, why did I cringe whilst reading about this S&M relationship? Because Mari is seventeen and has never experienced unconditional love from anyone (except her father, who was an alcoholic that died rather suddenly in Mari's young life).  She believes she is ugly and undeserving of happiness and views her relationship with the translator as a means of escape from her stagnant life at the hotel; where her mother roughly brushes her hair every morning and constantly berates her for merely existing.  With no friends to talk with or hang out, Mari relishes the freedom she feels when she is with the translator.   And this translator takes advantage of Mari's naivete.  He engages this young lady by playing on her loneliness and desperation.  At first, he seems rather odd, but quiet and soft spoken.  There is a walk around town and a wave goodbye, which leads to a letter that implores Mari to please meet him again.  Once they are on his island and in his house, the atmosphere shifts and the translator is no longer kind - instead he becomes forceful and authoritative with regards to what he expects from Mari.  Its interesting to watch this relationship progress throughout the book and the ways in which Mari's demeanor changes, along with her feelings about her body and self.  I think that the introduction of the translator's nephew was an easy way to begin the ending of Mari's relationship with the translator. Of course, the ending is not what I expected.  I won't spoil the ending for you, but suffice it to say that the translator turns out to be just as ugly a person as I had figured out earlier.  As for Mari, I'm not sure what I feel towards her, except disappointment and pity.  In the end, these characters definitely captured my attention as did their story.  Ogawa is able to describe a scene so vividly that you can clearly picture Mari's thrill at deceiving her mother or the excitement she felt while reading the translator's letters tucked away behind the front desk when no one was looking.  The writing is solid and the tone is perfect at capturing the unpredictable shift of events throughout the novel.  I would definitely recommend this book to Ogawa fans.

Happy reading to all! I'm off to finish reading Jean Rhys', Let Them Call It Jazz.

By the by, this read counts towards two of my reading challenges: Bellezza's Japanese Literature Challenge 4 and CL's The Summer Reading Challenge 2010 - (Click on the links to find out more about each challenge, if you are interested in joining in on the reading fun).  Bazinga for me!
Posted by A Bookish Way of Life at 8:10 PM
Labels: Hotel Iris, Japanese Literature, JLC4, TSRC2010, Yoko Ogawa

Well, this certainly is a different story than the only Ogawa that I've read: The Housekeeper and The Professor. I'm not quite sure what to think about wanting to read this one but she is a terrific writer, so maybe.

mel u - I haven't read The Diving Pool, but its on my TBR list. The Housekeeper and the Professor is one of my all time favorite reads! I just thought it was such a beautifully written piece of work.

Lisa - I know what you mean! I was hesitant to read this book when I first found out about it. It just didn't sound like the Ogawa from The Housekeeper and The Professor. It definitely is different and her vivid descriptions can be a bit off putting, but there is just something about her writing that keeps you reading no matter what. Its like she's got you hooked on this story and you just have to find out what happens to Mari. Well, I'll definitely understand if you give it a pass. Maybe The Diving Pool is a better read. Hmmm.

Wow... this one sounds very, very different than any book I've read. Your review of it is great though.

Thanks, Ti! This book was definitely not in the same vein as my usual bookish fare, but I'm glad I read it. It showed me a different side to Ogawa's writing.

I thought for sure I'd left a comment here, and I'm sorry to see I didn't. This sounds like a rather shocking detour from The Housekeeper and The Professor which I loved! The publishers said they would send me a copy, but it never arrived. Hopefully I'll get another chance with the JLC4, which I'm so happy you've joined. We're fellow Murakami lovers, you and I. So to speak. ;)

Bellezza, it was shocking to read this book - I was blindsided a bit. As for JLC4, I'm happy I joined, too! Its such a fun challenge to participate in - I'm so glad that you host it. And yes, we are Murakmi lovers - and I am looking forward to reading a few of his works during your challenge. Cheers!

Interesting review! I read 'Hotel Iris' sometime back and I agree with you - it is quite different from 'The Housekeeper and the Professor' but Ogawa's prose is so beautiful that it makes one want to read more.

Vishy, I completely agree with you! Ogawa has such a beautiful way with words that regardless of the subject matter you can't help but want to keep reading. I just love her work!

Nadia, I have just reviewed this and spied your link on the JLC4 site as I was posting mine.

I found it disturbing but very well executed; Ogawa was very subtle in drawing attention to the uneasy power plays between all of the characters, not just Mari and the translator. I didn't love it as I did The Housekeeper and the Professor (feeling it lacked the emotional connection) but it was definitely powerful.