the short second life of bree tanner: an eclipse novella by Stephenie Meyer 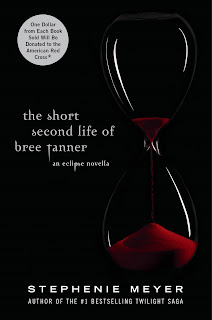 This morning I finished reading Stephenie Meyer's, the short second life of bree tanner: an eclipse novella and I must admit that whilst it wasn't a great book, it was a fun read.  I liked the idea of reading a book from the perspective of a vampire that wasn't a Cullen and who was still learning all the tricks of the trade of being a vampire.  Plus, I did remember the character of Bree from Eclipse and was interested to see what Meyer would tell us about her in this new book.  Basically, we find Bree living among Riley's pack of newbie vampires (he's building a small army of vamps for Victoria who is out to avenge her lover's death) and trying to survive by living under the radar - meaning doing as she is told and hiding behind a vampire named Fred.  In this novella, we learn that human Bree was abused as a child and that she ran away from home at the age of 15.  She was starving on the streets when Riley found her.  He offered her a hamburger and she thought she'd have to pay him with sex, but wound up paying him with her life.  Well actually, Victoria made her a vampire, but Bree wasn't allowed to see her or know her, so she didn't even know that her maker's name was Victoria.  We begin with Bree out hunting for blood with some other newbies.  She is trying to stay out of their way and remain a bit distant, because of their habit of creating chaos on the streets of Seattle.  Diego, a somewhat older vamp who is close to Riley (their leader) has come along on this outing.  Unsure of his motives at first, Bree is reluctant to trust Diego, but soon enough they are sharing stories about their past lives as humans and figuring out that Riley has a secret that involves them all.  Feelings of romance begin to blossom between Diego and Bree, but they are short lived once they return to their coven's hideout.  Because Bree and Diego have decided that they need answers and they need them quick.   From this point on Bree and Diego find out the following information: there is an upcoming battle with the Cullens, the four vampires who visited Riley and Victoria are powerful and uphold the vampire law, and that their life span is about to be shortened.  Soon enough the battle has begun and we find ourselves seeing the Cullens from Bree's perspective.  And then Bree shuts her eyes and faces the inevitable - death.

Overall, it was nice to escape into the Twilight world for a short time. The writing was the same as the previous Twilight novels- not bad.  There were times where it seemed like I was reading the same sentences over and over and over again, which was a bit tedious.  The vernacular that Meyer chose to use to illustrate a contemporary and youthful feel was a bit dated and didn't flow as naturally as it was intended to.  The romantic nature of Bree and Diego's relationship seemed rushed and a bit forced, as if it was thrown in the story in order to check off an item on the list of what should be included in the book: battle = check, deception = check,  love = check, etc.  The bit with the Volturi visiting Victoria and Riley was a bit much.  I mean, we already knew that they were duplicitous and that they want the Cullens destroyed, so to have them go and encourage Victoria in her plot to kill off the Cullens was unnecessary.  I suppose in the end, this novella about Bree Tanner was not really integral to the Twilight saga, because it didn't really provide us with any new information.  At the end of the day, it was still fun to read about vampires and escape into the silliness of it all.  I wouldn't really recommend  this  book to non-Twilight fans; and as for Twilighters I would just say that if you pass on this book, its not a big deal, because there really isn't much to be gained from reading the short second life of bree tanner.

Happy reading! I'm off to figure out which book to read next.
Posted by A Bookish Way of Life at 10:09 PM
Labels: fiction, Stephenie Meyer, TSSLOBT, Twilight saga, vampires

I'm guessing it won't even matter whether or not this book is any good, it will be a huge seller.

This book is available to read for free on her website. Anyways, I was hoping her writing would be better - like in The Host. Bummer! I think I will still read, but only because I can read it for free online.

Lisa, I know! It will still be a huge seller no matther what. I bought a copy because I was excited for another Twiligh installment, so there you have it :) LOL!

Aths, definitely read it for free if you can. That's great that she is doing that! Maybe you'll enjoy it more than I did. :)

Borders informed me of this new release on my email, and I thought it would be a wonderful gift for my neice. I'm torn between believing the author wants to tell us more of the story and the author wants to make more money; probably a little bit of both. Like when Rowling released The Tales of Beedle The Bard...anyway, glad to know that you liked it. Sometimes a whimsical escape is just the thing for summer. (I have The Host, but I haven't read it yet, only the Twilight series.)

Thanks for your review - I think I'll pass on this one.