Heart of Lies: A Novel by M. L. Malcolm 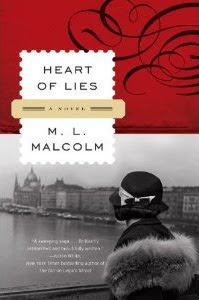 From back of book:
Leo Hoffman was born with a gift for languages.  When his dreams for the future are destroyed by World War I, the dashing young Hungarian attempts to use his rare talent to rebuild his life, only to find himself inadvertently embroiled in an international counterfeiting scheme.  Suddenly Leo is wanted across the European continent for a host of crimes, including murder.  Left with no options, he must escape to Shanghai with his lover, carrying with him a stolen treasure that could be his salvation...or his death warrant.  But the gangsters who control the decadent Asian city have no intention of letting him outrun his past.  And when the Japanese invade, one wrong move could cost Leo Hoffman everything he holds dear.
My thoughts:
I like historical fiction for the details.  I like to read about the past and envision the cities, countries, architecture, lifestyles and people that are being brought to life in novels about intrigue, love and war.  However, I'm not keen on books that have one-dimensional characters that are carried along in the story with such planned efficiency that its rather obvious the author did not let the plot evolve naturally, but instead devised each event without a sense of realness.  Its rather disappointing when that happens, because it tends to detract from the well researched historical details provided throughout the novel.  And this is exactly what I experienced when reading Heart of Lies - DISAPPOINTMENT.  Oh well, at the end of the day, not every book is going to make it to my list of top reads, right? The thing I don't get is that I had read several positive reviews about this book, which confuses me - what did they read that I didn't?  I suppose that this is another case of 'different strokes for different folks', eh? Well, if anyone in the US wants my copy of Heart of Lies just leave a comment and include your email address - maybe you'll enjoy it more than I did. Well, I'm on to the next read. Cheers!
By the by, Thanks to Nicole over at The Book Report Network for providing me with a copy of Heart of Lies!
Posted by A Bookish Way of Life at 10:12 PM
Labels: Heart of Lies, Literature, M. L. Malcolm

Hungarians are very popular in books all of sudden. This is the second book I saw this week with a Hungarian hero.

Oh how disappointing, I hate that. It looked like a good read too. Hm. I do like the Hungarian aspect as my great grandpa immigrated from Hungary.

Brenda - Really? What was the other book? That's pretty interesting, eh?

Amanda - I know! I hate when that happens, too! Of course you might enjoy the book, so it could have been just me not feeling it.

Ah, I'm so sorry this book was a disappointment. I know you shouldn't just books this way, but I couldn't help thinking the cover looked so promising!

Connie - I know what you mean! I thought it would be an intriguing book based on the cover, too! I know that its bad to judge a book by its cover, but sometimes I still do :) Oh well.

What a bummer! So sorry to hear about your disappointment. I'm certainly willing to give it a go, however, if you're parting with it (kimberly.anneloomis@gmail.com). I often feel similarly when I read other reviews of a book I read and they differed vastly in opinion. ;)

A so-so book then? Its hard to write a review when you're uninspired isn't it. Never mind - plenty more in the pile I expect!

Nadia, thanks for the headsup. I had my eye on this one. The elements of this novel---historical fiction, Hungary, Shanghai---make up what seems to be a winner. I'm sorry you didn't enjoy this one. I'm still interested in checking it out.

I wanted to like this book more than I did. I'm crazy about foreign places, romance, marriage/family etc. But, I was so disheartened by the character (literally) of the man that I couldn't move past him to enjoying the rest of the story.

The sweet author left me kind and insightful comments. I always feel badly when I don't love a work someone has obviously put their heart into, and I appreciate her grace so much.

But, I can see your disappointment.