Whiter Than Snow by Sandra Dallas 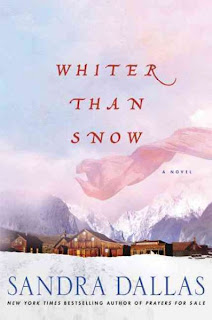 On a spring afternoon in 1920, Swandyke - a small town near Colorado's Tenmile Range - is changed forever.  Just moments after four o'clock, a large split of snow separates from Jubilee Mountain high above the tiny hamlet and hurtles down the rocky slope, enveloping everything in its path.

Meet the residents whose lives this tragedy touches: Lucy and Dolly Patch, two sisters long estranged by a shocking betrayal.  Joe Cobb, Swandyke's only black resident, whose love for his daughter forces him to flee Alabama.  Then there's Grace Foote, who hides secrets and scandal that belie her genteel facade.  And Minder Evans, a Civil War veteran who considers cowardice his greatest sin.  Finally, there's Essie Snowball, born Esther Schnable to conservative Jewish parents but who now works as a prostitute and hides her child's parentage from the world.

Fate, chance, and perhaps divine providence all collide in the everyday lives of these people.  And ultimately, no one is without sin, no one's soul is whiter than snow, and no one is without the need of forgiveness.

A solid read that kept me interested throughout.   Whiter Than Snow is a human interest story about the townsfolk of Swandyke coming together in the midst of a tragic event - an avalanche trapping children - and putting aside their differences in the hopes of racing against the clock to save their children.  The writing was good and made for a fast read.  The characters were a bit stereotypical, but developed enough to make them engaging.  We begin the story with the fact that nine children get trapped, but only four survive.  From this point we learn about several characters through flash backs and find out what brought them to Swandyke.  We find out their fears, hopes and secrets - all the while willing them to dig faster, because 20 minutes is not enough ( the time they have to get their children out from under all that white snow.).  And that is why you keep reading, because you want to find out who lives and who doesn't - whose future will be irrevocably changed forever.

Talk about a dramatic tale - there is tragedy, history, snow, love, forgiveness, and death.  Whiter Than Snow is a good read and if you are interested in my copy then be the first one to leave a comment requesting it and I will send it out to you - for US residents only.  Don't forget to include your email with your comment.

Thanks to Anne from The Book Report Network for sending me a copy of this good read!
Posted by A Bookish Way of Life at 7:47 PM
Labels: Literature, Sandra Dallas, Whiter Than Snow

I've been dying to read this one. I was born in a tiny mountain town and this looks like something I'd like and can share with my sister.

Amanda - you will definitely enjoy this one, then. I'll email you for your details so that I can send you this book. Hope you and your sister enjoy it! Cheers!