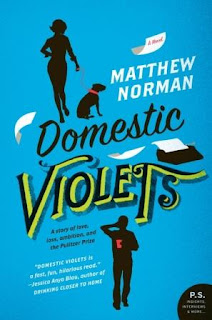 Tom Violet always thought that by the time he turned thirty-five, he'd have everything going for him.  Fame.  Fortune.  A beautiful wife.  A satisfying career as a successful novelist.  A happy dog to greet him at the end of the day.

The reality, though, is far from different.  He's got a wife, but their problems are bigger than he can even imagine.  And he's written a novel, but the manuscript he's slaved over for years is currently hidden in his desk drawer while his father, an actual famous writer, just won the Pulitzer Prize for Fiction.   His career, such that it is, involves mind-numbing corporate buzzwords, his pretentious arch nemesis Gregory, and a hopeless, completely inappropriate crush on his favorite coworker.  Oh...and his dog, according to the vet, is suffering from acute anxiety.

Tom's life is crushing his soul, but he's decided to do something about it.  (Really.)  Domestic Violets is the brilliant and beguiling story of a man finally taking control of his own happiness - even if it means making a complete idiot of himself along the way.

I heart Tom Violet! He is my first bookish crush.  He's smart, creative, funny, and flawed - just the type of guy you want to marry and have babies with (yes, I still want to marry him in spite of that night with Katie).  Tom is such a realistically drawn out character: he's struggling with his marriage; battling his arch nemesis, Gregory, at work; crushing on his assistant Katie; and dealing with the fact that his father, the famous Curtis Violet, has just won the Pulitzer Prize for Fiction.  You see, Tom wants to be a writer, too.  He wants to produce something that will provide him with his own piece of glory, which is why he's bummed that no one (wife, mother, and almost agent) has read his book yet, to let him know just how awesome his writing is.

Domestic Violets is a breath of fresh air - its clever, hilarious, honest and real, which makes it such a great book to read.  Matthew Norman has truly hit it out of the park with his debut novel - not only has he demonstrated what a talented author he is with this cast of unforgettable characters, but he's also created this year's must read novel.  I would most definitely recommend this novel to everyone! The writing is spot on and the story itself is so engaging that you can't help but find yourself so completely immersed in these character's lives that soon you are not only cheering them on to succeed, but also shedding a few tears when bad news finds them.  Reading this book was such a treat, that I wish I hadn't read it in one day and instead taken my time with it so that I could prolong reaching the end.  Now I can't wait for Norman's next book,  because I'm sure its going to be just as brilliant as Domestic Violets was.

Thank you to TLC Book Tours and the publisher for providing me with a copy of the book.

I keep reading these reviews almost hoping to see a negative one but never do! I may just have to give in and buy this one instead of waiting and waiting on the library list!

Hooray! I sometimes come across a book that I absolutely adore and get so sad when no one else likes it. This has so NOT been the case with this book. It seems to be just an overall crowd pleaser. I loved it and I’m so glad that you did, too!

rhapsodyinbooks, I know what you mean! I have yet to read anything bad about this book either, which made me kind of wonder if I'd be the one to not like the book. Of course, just like everyone else, I absolutely loved this book! It is just sooooo good! You have to get your hands on a copy, because you will not be disappointed!

Pam, YAY! So glad you enjoyed this book, too! Its just fantastic, isn't it? Definitely a must read for all!

Your first bookish crush? That alone is enough to convince me that I need to get to my copy of this!

That sounds quite funny actually. And just what I need after a whole summer of trying to finish my own novel. Might check it out.

Lisa, you need to get a copy! Its so good! I know you will love it!

Overdue, that is awesome that you are working on your novel :) And, yes, you will enjoy this book! Its definitely a must read.

Ooh, your first bookish crush?! I LOVE it! Can't wait to read this myself and see if I love Tom as much as you did.

heathertlc, I think you will love this book! Its sooo good! Thanks for having me on the tour - I loved it!

I just wrote about this yesterday and found it difficult to do because the book is so good. You did an excellent job with your review!

bermudaonion, I loved your post! I thought you did a great job discussing the book and your enjoyment of it. I'm so glad you liked it, too!